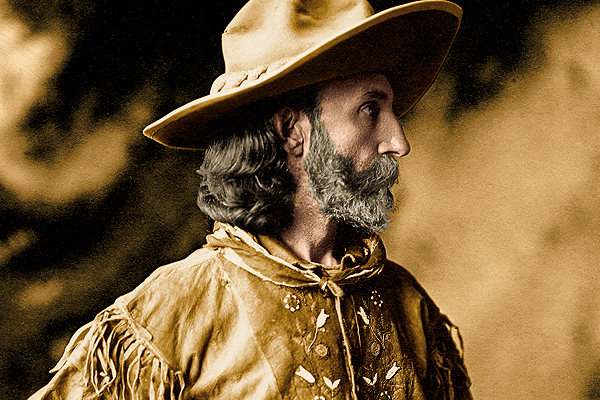 For Charles Stewart Stobie, the decision to travel from Eastern cities to the Indian lands in the rugged American West would last a lifetime. Although he is not as well-known today as Wild Bill Hickok, Buffalo Bill Cody and Frederic Remington, they not only were his contemporaries, he considered each of them a friend.

Born in the Chesapeake harbor town of Baltimore, Maryland, on March 18, 1845, Stobie discovered his passion for drawing while studying architecture at Madras College in St. Andrews, Scotland. At the age of 18, in 1863, he headed west, journeying to St. Louis, Missouri, and securing river passage up the Missouri River to Nebraska City, Nebraska, where he hired out as a bullwhacker. Bored with the slow pace of the ox train, he found employment with a wagon train heading to Fort Kearny.

In 1865, Stobie met Moses Milner, more colorfully known as “California Joe.” This former Indian scout was leading a group of immigrants to Colorado, and Stobie joined the wagon train. Purportedly, before the group arrived in Denver, they were attacked by Indians three times. Stobie recalled how The Rocky Mountain News loosely credited him with killing seven of those attackers.

Legends, like Stobie’s tale, fed the history of the West. Stobie later said, “From that time forward, I never wanted for employment, friends or money in Colorado.”

He began to sketch and paint what he witnessed on the frontier, and in many of his works, he portrayed himself when he included a rendering of a weathered trail scout. His style was realism, and he focused his works particularly on American Indian figures in their garb and on high-country landscapes.

As the years passed, the smooth-faced young man gave way to a bearded frontiersman with ivory-handled six-shooters, buckskin garments and a sunbaked face lined with the sights of magnificent desolation and man’s continuing acts of cruelty to one another.

In 1868, Stobie scouted for Maj. Jacob Downing’s expedition against the Arapaho and Cheyenne. During his years scouting for the U.S. Army, he assisted in marking the location of the White River Ute agency in northwest Colorado, and he maintained friendly relations with frontiersmen Kit Carson, Jim Baker and Mariano Medina. When he was not deep in the backcountry, he was painting portraits and landscapes in his Denver studio over the Tambien Saloon at 355 Larimer Street. He epitomized the most dramatic of contrasts: Indian scout and gallery-situated landscape artist.

In the fall of 1874, Stobie moved to Chicago, Illinois. He lived there until his death in 1931. Throughout these years of his life, he had returned periodically to his beloved Colorado, where he avidly hunted buffalo and officiated as a guide in the upper Colorado River region. The Denver Post called Stobie a “rare painter of western life and scenery with all the charm and romantic passion that only those who love it, know how to throw into pictures of the West.”

He also remained a favorite among the Utes, a tribe he had joined as a young man and with whom he participated in raiding parties against other Western tribes.