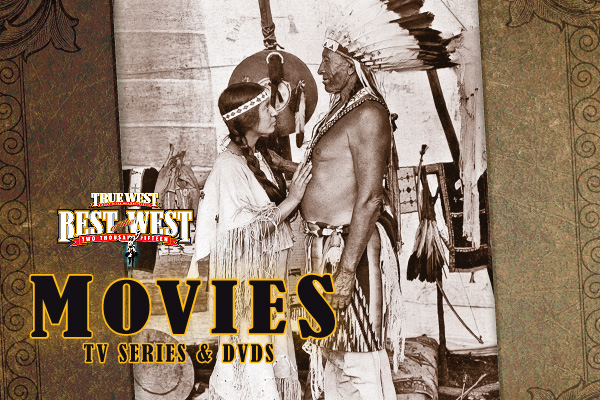 The Year 2014 proved to be a year of ups and downs for the Western, with a major film dying gutshot at the box office, while one of the most anticipated Westerns in years gained momentum and status at film festivals around the world. On television, the tug-of-war with the genre exploded, with A&E’s decision to cancel Longmire, despite its success, and rival networks launching new series, showing, again, the genre’s staying power.

A Million Ways to Die in the Theater

On the big screen, the choice of Westerns in 2014 ultimately boiled down to two films. Universal’s A Million Ways to Die in the West was a big comedy gamble, but never captured an audience, even with a terrific trailer. Seth MacFarlane’s follow-up to his successful Ted didn’t sit well with Westerns fans, who felt the comedy did nothing but disrespect the genre, instead of saluting it, á la 1974’s Blazing Saddles. Anyone in the mood for some Saturday night raunch also gave it a pass.

The year seemed to overflow with announcements of new Westerns. Thanks to Facebook, et al, we got to follow the ping-ponging pre-history of Quentin Tarantino’s The Hateful Eight; will he make it, or will he toss it away? After an enormously successful public reading of the script, with Kurt Russell and Bruce Dern among the participants, Tarantino decided to move ahead with the Western, shooting it this winter in glorious 70mm widescreen. The Hateful Eight will probably carry 2015 for theatrical movie expectations, simply because Tarantino decided to make another Western immediately after his Oscar-winning Django Unchained.

At least two major Westerns are on the horizon for next year: the independent Horror Western Bone Tomahawk, with Kurt Russell, and The Magnificent Seven, with MGM hoping to reteam Training Day director Antoine Fuqua and star Denzel Washington in the remake.

We have a lot of Westerns to look forward to, and to debate. We understand the need for remakes, since Hollywood has made them since the silent era, but here’s hoping our pick for “Best Western Movie” points producers toward a clean horizon of original Westerns.

The Western of the year is undoubtedly Tommy Lee Jones’s adaptation of Glendon Swarthout’s superb novel The Homesman. The film, with Jones as the man hired to bring three mentally ill women eastward, was a hit in film festivals, stirring major Oscar buzz for costar Hilary Swank before its domestic release. Jones has been one of the genre’s biggest supporters, and his work as a director on The Three Burials of Melquiades Estrada more than proved his merit, but The Homesman places him in a new rank as an important Westerns filmmaker. No Western since 1992’s Unforgiven has raised, and met, critical expectations with assurance as has The Homesman, and Jones has now been tagged to write, direct and star in a new version of The Cowboys for Warner Bros.

Independent Westerns made some noise, with the best of them being Michael Berry’s noirish Frontera that examines both sides of the illegal alien issue and stars Ed Harris as a former Arizona sheriff caught up in a rough murder case. Harris brings his trademarked intensity to the tough, parched film. Harris’s next foray into Westerns is taking on the role of Yul Brynner’s gunslinger character in the new HBO series of Michael Crichton’s Westworld.

A&E’s decision to give Walt Longmire his walking papers stunned everyone. The network’s second-highest-rated show, after Duck Dynasty, Longmire set a standard for scripted drama at A&E, but it supposedly wasn’t pulling the age demographic desired by advertisers. The fog has cleared, and Warner Bros. has made the show available to the highest bidder; many are chomping at the bit. Other shows have risen from the ashes of cancelation only to have longer runs than the makers imagined. Longmire should be one of these.

The stalwarts, AMC’s Hell on Wheels and FX’s Justified, enjoyed strong viewership in 2014, with Justified averaging 2.29 million viewers. I felt this season sometimes lacked focus, but it roared to a classic, Elmore Leonard conclusion and set us up for the show’s final season. Saying goodbye to Raylan Givens in 2015 will be tough, but we all know he ain’t going down easy, or alone.

Hell on Wheels deserves the nod as the year’s top TV Western—the fans just love it, and they go crazy every time another character gets killed; most series save the death of a major character for the finale, but not Hell on Wheels—the death of Elam Ferguson sent many reeling.

Even as A&E was losing faith in its Western, Lifetime was initiating a new one. Notebook author Nicholas Sparks produced Deliverance Creek, a two-hour pilot for his series about a young wife fighting for her ranch and children during the Civil War.

Cut from old-style melodramatic cloth, we can imagine Olivia DeHavilland in this role 75 years ago, which is part of Deliverance Creek’s charm. The show is by no means genre-defining, but rather a stitched-together throwback that offers a comfort zone for viewers eager for a little Western romance and action.

The Discovery Channel aired two new Westerns. Its first scripted miniseries, Klondike, was amazingly well made, if not always completely engaging. Gunslingers, on the newly launched American Heroes Channel, focused on some of the West’s baddest outlaws. What made the show stand out was the cinematic approach to its re-creation scenes and an interesting assortment of experts interviewed.

I anticipate a more significant commitment to Westerns on television from the boys in the front office, even as Sheriff Longmire hunts a new home.

John Wayne: The Epic Collection (Warner Home Video, $149.98) puts together Duke titles ranging from the 1930s (Haunted Gold) through to his final film (The Shootist). The set draws from Warner, RKO and Paramount libraries, with no Republic titles, but these are the most recent releases of the films, complete with trailers and documentary extras. It comes in a slipcase with a nicely produced book about Duke’s films. This might be an old trail for Wayne fans, but many will find it nice to have these titles collected, and you couldn’t ask for a better overview of Wayne’s career.

For B-Western fans, the Warner Archive Monogram Cowboy Collection ($40.99 apiece) is a true gift. The series is now in its eighth volume, and the prints of the adventures of The Rough Riders and Johnny Mack Brown have never looked better.

Duke again, in Criterion’s superb release of Howard Hawks’s Red River ($39.96), which shows the film in its most beautiful form and features rare conversations with Hawks and writer Borden Chase, among many extras. As always, Criterion has done a top-flight job.

VCI Entertainment has done us all a favor with Annie Oakley: The Complete Series ($99.99). Produced by Gene Autry, the show was amazingly popular in the 1950s, thanks to star Gail Davis. This set presents every episode, along with a fine documentary, comments from Davis’s daughter and superb supplements.

The runner up, Justified: Season 5 ($55.99), is an excellent set, even as the series went down different roads. The set’s extras feature insights into Elmore Leonard’s world and his driving creative force behind the game-changing series.

No movie book of 2014 had the personal touch of Max Evans and Robert Nott’s Goin’ Crazy with Sam Peckinpah and All Our Friends (University of New Mexico Press). This book offers a close-up look at the man and his films, from one of his oldest friends, who tells the tale of their rocky road as if sitting by the campfire—a funny, sad, fascinating insight into one of cinema’s great mavericks.

California’s fabled Alabama Hills and nearby Inyo National Forest has had a long-standing love affair with Hollywood, and, for 25 years, these backdrops for numerous Western movies have become star attractions themselves. The Lone Pine Film Festival, held every October, has been the footpath to roads touched by John Wayne, Gene Autry, Roy Rogers, John Ford, William Wellman and Budd Boetticher. Celebrity guest stars, classic movie tours, screenings and the opportunity to swap stories with big fans of Western movies keep bringing folks to this dream of a festival.

Editor’s Choice: Goin’ Crazy with Sam Peckinpah and All Our Friends by Max Evans and Robert Nott (University of New Mexico Press)