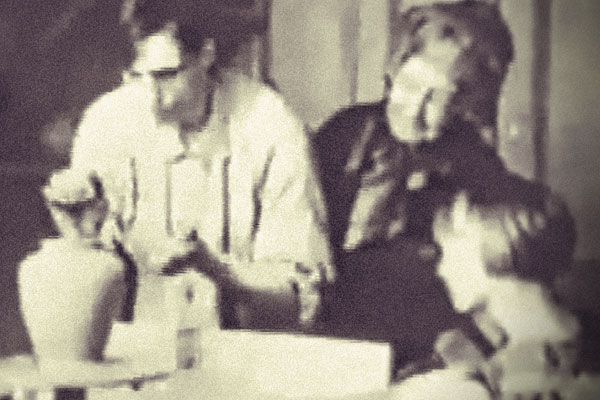 Elizabeth Bacon Custer—keeper of the flame for George Armstrong Custer, her husband who famously died at the Little Big Horn in 1876—was also an actress.

Of course, you’ve probably never seen the film she starred in, a 14-minute “how-to” called The Pottery Maker.

Here’s how it came about. Libbie had studied art when she was growing up in Michigan. She had sketched scenes on her travels with husband George, and her personal journals feature drawings of clothing and landscapes.

In her post-George life, Libbie initially faced lots of debts and few prospects. She was crushed by the death of the love of her life; Libbie never came close to remarrying, preferring to burnish the Custer legend through books and articles, which provided her a meager income. She took a part-time job as a secretary for the Society of Decorative Arts in New York. It was 1877; the widow Custer was 35 years old.

That’s when her fortune changed. Libbie was a beautiful, intelligent and engaging woman who gained friends and admirers easily. She hit the lecture circuits, bringing in big bucks for the first time in her life. By the Roaring ’20s, when she was in her 80s, Libbie had built up a pretty fair bank account (her estate was valued at more than $100,000 when she died in 1933, which would equal $1.68 million today).

Her wealth allowed her to be an enthusiastic backer of art institutions like New York City’s Metropolitan Museum of Art and the Greenwich House of Pottery. In 1925, those two organizations banded together to produce a film on pottery making. The director was Maude Adams, formerly one of America’s top Broadway actresses. Victor Raffo handled the title role; he was considered one of the best potters in the world. The film was shot at the Greenwich institution.

A documentary showing how to throw a pot isn’t usually an audience grabber. So the producers created a flimsy plot: an old lady and her young granddaughter visit a pottery shop. While the proprietor is in the back, the little girl destroys the piece on the wheel the potter was working on. Naturally, the guy is ticked off (Raffo’s facial expressions are priceless). He starts over—and for the next several minutes, he shows his visitors how to make a pot.

“Granny” in the billing is 83-year-old Libbie, looking serene and dignified with snow-white hair, an old-fashioned hat and a black dress (she wore nothing but black after George’s death). The girl is Raffo’s daughter Ruth (who is still alive in upstate New York).

Libbie biographer Shirley Leckie believes Libbie was chosen for the role because she was still a well-known celebrity at the time who was also a patron of the arts. Libbie also may have been cast because the film came out in 1926—the 50th anniversary of her husband’s death at the Little Big Horn, which meant additional publicity for The Pottery Maker.

Jump ahead to the 1980s. Chris Enss, who has written her own biography of Libbie, says historian John Carroll was combing through the archives of the Greenwich House of Pottery, when he discovered the little-known film. Carroll made a 16mm copy and showed it to friends, colleagues and Custer family members. Historian Paul Andrew Hutton remembers seeing it at a 1989 gathering of Custer enthusiasts.

In 2006, The Pottery Maker got a plug when a short clip was shown in the PBS show The Last Stand at Little Big Horn. Nowadays, you can find the film on YouTube. If for nothing more than the curiosity value of Libbie’s star turn, The Pottery Maker is worth a view.