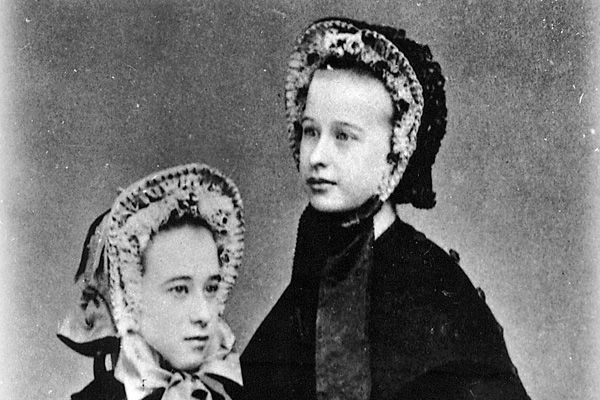 The stormy relationship of Doc Holliday and Kate Elder is perhaps the most perplexing and frustrating dimension of John Henry Holliday’s tragic story. Despite popular images of a violent and abusive tryst and old-timer gossip about Kate’s proclivities for sex acts frowned upon even by her generation of Cyprian sisters, little exists to provide an “intimate” portrait of their life together.

Doc left not a word about her, and Kate’s accounts, given variously to Anton Mazzanovich, Joe Chisholm, and Dr. A.W. Bork in the 1930s, are all self-serving and defensive. Yet, understanding the Holliday-Elder relationship begins there, not because they are the best sources, but for now,  they are the only sources.

She was a widow living in the Arizona Pioneers Home in Prescott as Mary Katherine Cummings when she met Anton Mazzanovich, himself a pioneer Arizonan with experience as a writer. She introduced herself to him as “Mary Katherine Elder” from Illinois, when in fact she was Mary Katherine Harony of Davenport Iowa. Cautious and protective, she appears to have preferred to let her past go without a mention until the publication of Stuart N. Lake’s Wyatt Earp: Frontier Marshal in 1931. The image of “Big Nose Kate Fisher” as a troublesome and vindictive whore provided by Lake, angered her and, almost certainly, revived an ancient resentment against Wyatt Earp, whom she clearly blamed for destroying her relationship with Doc.

Just how Mazzanovich found her is not clear from the available sources—success in expunging her past from the public record was so complete—yet doubts that Mrs. Cummings was really Kate Elder appear to be misplaced. Kate’s recollections were confused by fading memory, calculated to portray her in the best possible light, and yet filled with information that only someone close to Doc Holliday could possibly have known. It is this internal webbing of intimate knowledge that provides the most convincing case that she was, in fact, Doc Holliday’s woman.

She was a woman with a story to tell and much to hide. The accounts she gave to Mazzanovich, Chisholm and Bork have to be sifted like river sand in a placer box to separate a great mass of debris from the nuggets of reality that do appear, and yet there is a sense in which the very composition of emotion, subterfuge, and even outright lies in what she said, reveal a fascinating set of insights into the nature of her relationship with Doc.

First, although she insisted that she was married to Doc, in one account in Saint Louis, Missouri in 1870 and in another in Valdosta, Georgia in 1876, her recollection is unemotional and almost detached insofar as her feelings for him are concerned. She defends him against charges that he was a killer and a drunkard, and she insists that he treated her well. She portrays herself as loyal and solicitous. But there is no romance in her story. Indeed, she reveals resentment toward Doc, accusing him of gambling away her money and implying Doc’s complicity in shady dealings with her accusations of Wyatt Earp’s involvement in stage robberies. She also finds Doc weak in not standing up to Wyatt.

This absence of any real sense of her affection for Doc is especially underscored by her fawning, romantic portrait of John Ringo. She fairly gushed over Ringo’s appearance and manly traits before concluding, “And he was noble, for he never fought anyone except face to face. Every time I think of him my eyes fill with tears.” There are no such terms of endearment over Doc anywhere in her recollections. Indeed, her description of Ringo is the only place in her writings where she evinces any emotion other than anger and resentment. It is almost as if her defense of Doc as a “good man” was essential to her own defense as a “good woman,” whereas her sentimentality toward Ringo revealed her simply as a woman without the guile so painfully apparent in her defense of Doc.

Second, Kate’s portrayal also provides some insight into the chronology of their relationship. Her knowledge of Doc and the accuracy of certain details, such as placing Doc’s practice in St. Louis on Fourth Street near the Comique Theatre and the Planters Hotel, make it almost certain that Kate and Doc first met in 1872 when she was working at the Comique as “Kate Fisher” and he was practicing temporarily at the office of his friend and classmate, A. Jameson Fuches, a few blocks away. Her knowledge of Doc’s inheritance, although confused in detail, is sufficient to demonstrate first hand information she could have acquired nowhere other than from Doc.

Despite some confusion about dates, she places them together next in Sweetwater in the Panhandle of Texas in the winter of 1875-76, at the time that Bat Masterson killed Corporal Melvin King. However, her lack of knowledge about Doc’s movements in 1876 (including her denial that he was in Denver) suggests that they were not together to stay at that point. Perhaps, she used Doc to justify her presence in Sweetwater where she may have gone as a dancehall girl after working at Tom Sherman’s place in Dodge City the previous summer.

She does appear to have linked up with Doc by 1877, probably at Fort Griffin, and to have enjoyed a reasonably constant relationship from that point through Doc’s peregrinations in Texas, his eventual move to Dodge City, Kansas, and his subsequent sojourn in New Mexico. Wyatt Earp’s arrival in Las Vegas, New Mexico, in the fall of 1879, appears to have ended the halcyon days of the relationship. In Arizona, Kate and Doc parted company in Gillette (she says over Doc’s decision to go to Tombstone) with Kate going to Globe and Doc first to Prescott, back to Las Vegas, possibly to Albuquerque, again to Prescott, and eventually to Tombstone.

The records of the time, as well as Kate’s own accounts, indicate that the two visited each other several times in 1881, with Kate going to Tombstone and Doc to Globe. She appears to have joined Doc for an attempted reunion early that year, for she is listed in the Tombstone Epitaph of March 21, 1881, as “Mrs. Kate Holliday,” indicating that they were living as husband and wife at the time. In early July, Kate, now curiously identified as “Kate Elder,” accused Doc of being a principal in the Benson stage robbery attempt which had occurred on March 15, 1881 and on July 5, Doc was indicted on the basis of her accusations. Kate later claimed it was a desperate move to break the hold of the Earps on Doc, but at the time, it appeared that it was merely the act of an “enraged and intoxicated woman.” Four days later, the charges were dropped, and Kate was hurried out of town with more reason to resent Wyatt Earp.

Doc visited her in Globe in October, returning with her to Tucson and eventually to Tombstone four days before the fateful confrontation on Fremont Street between the Earps and the Clanton-McLaury bunch. She later wrote touchingly of Doc’s determination that day and his emotional reaction to what happened, but when Doc was remanded to jail with Wyatt because of the shootings, she left Tombstone on money provided by John Ringo, according to her own account, which also rather pointedly notes that she needed help because “Doc had lost all my money, about $75.00, playing faro while we were at the Tucson Fiesta.”

No real evidence exists of contact between Doc and Kate between November, 1881, and the summer of 1887, when Doc apparently wrote her and asked her to come to Glenwood Springs, Colorado, to care for him in the last stages of his battle with tuberculosis. Kate went, whether out of love or loyalty or duty, and, to her credit, stood by him until the end.

The record does not support the characterization of Kate as “the nastiest whore in Kansas,” to borrow Dennis Quaid’s line as Doc Holliday in Kevin Costner’s Wyatt Earp. In fact, the only thing the record confirms for sure is that she was arrested in 1874 in Witchita for prostitution, and was a dancehall girl in Dodge City in 1875, which did not necessarily mean she was a whore. Other characterizations, both contemporary and modern, owe more to rumor and supposition than to hard fact. After she joined Doc in 1877, she does not appear ever to have worked as nymph du pave again, nor does the record provide any evidence of an abusive relationship.

What is suggested is an on again/off again relationship that most always ended in arguments. It is fair to conclude that the two needed one another until the Tombstone troubles divided them. They were both educated people and had a certain kinship in lives that had gone awry. Doc Holliday was no doubt spoiled and used to having his way, which was difficult for Kate, who was clearly a strong-willed and independent woman.

Kate’s bitter resentment toward Wyatt Earp in later years evinces more than anger over Stuart Lake’s portrayal of her. She saw Wyatt as the source of her estrangement from Doc, although Doc’s own loyalty to Wyatt and sense of honor were probably more to blame, with Kate’s affection for John Ringo possibly the final straw that drove them apart in Tombstone.

There is a hardness in Kate’s accounts that she cannot hide, and an element of deceitfulness, but there is not enough evidence to determine whether those were traits that were part of her makeup at the time she and Doc were together or attributes she acquired later. Perhaps even after all those years, she still harbored the anger of “a woman scorned.” Neither her contemporaries nor later writers have been kind to her. Joe Chisholm, who was rebuffed by her in his efforts to tell her story, characterized her in ugly terms in his Brewery Gulch, and that was the image that stuck.

In truth, there is too little hard evidence to know for certain what brought Doc Holliday and Kate Elder together or what drove them apart. There was an unmistakably strong attraction between them which caused them to find each other again and again. The story is all the more compelling because of the unanswered questions about them both. In the end, their relationship seems not so much a love story as a kind of mutual need that bred loyalty and respect, and gave a measure of comfort to both.