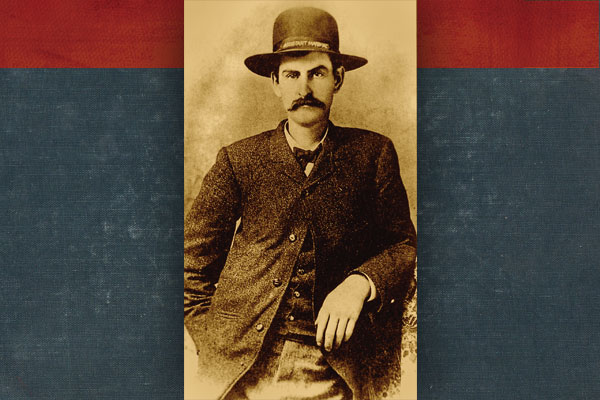 Dave Mather was a man of mystery—not only in life, but also in death. “Mysterious Dave” straddled the line between outlaw and lawman, and left behind few reliable documents for us to figure out his life story.

Mather was born in the northeast United States in 1851; one of the few certain facts. Both his parents died by the time he was 16, so he and his brother, Josiah, headed west.

In Arkansas, in 1873, he allegedly rustled cattle with Dave Rudabaugh before fleeing the state. He dabbled in buffalo hunting. He survived a knife fight in Dodge City, Kansas. In 1878, he sold fake gold bars to gullible citizens in Mobeetie, Texas. Some allege his partner in crime was a future legend of the West: Wyatt Earp.

In Las Vegas, New Mexico, Mather found power as part of the Dodge City Gang, led by Hoodoo Brown. Despite his checkered criminal past, he was named deputy marshal. The Variety Hall shoot-out on January 22, 1880, saw the death of Marshal Joe Carson. Mather—left standing after gunning down outlaw William Randal and wounding James West—became marshal.

After another tour on the road, he returned to  Dodge City, as co-owner of the Opera House Saloon. His feud with saloon owner Thomas Nixon ended with Mather killing Nixon with four bullets to the back.

What happened after Mather left Dodge City is up for debate. The mystery continues when it comes to his resting place. He was either left for dead on railroad tracks in Dallas, Texas, in 1886, or he joined the Royal Canadian Mounted Police and lived out his days in Canada into the early 1920s.

Lifelong outlaw, hero lawman or a mix of both? Died on the tracks or in the frozen north? Some of the truths about Mysterious Dave Mather seem destined to stay lost.

Who should be our next unsung character of the Old West?

Send details to editor@twmag.com, and be sure to include high-resolution historical photos.