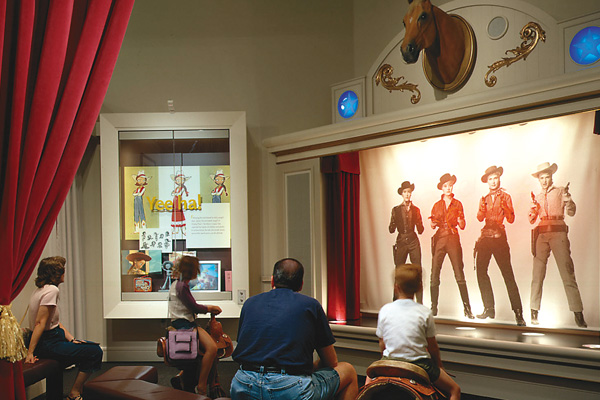 It doesn’t get much better than this: watching fancy marksmanship by Annie Oakley on film that was shot by Thomas Edison. Right off, you know you’re somewhere that cares.

You’re at the National Cowgirl Museum and Hall of Fame in Fort Worth, Texas, celebrating the “cowgirl spirit” in one of the nation’s newest and most interactive museums. Almost every exhibit is designed to engage the viewer, from the rolling clothesline of fancy rodeo duds, to the touching testimonials of life on the ranch, to the talking horse—yes, the talking horse—that comments on women in the movies.

You can watch the best of the rodeo trick riders from the early 20th century—including a nifty film clip of Vera McGinnis showing off on horseback—or select your favorite country tune from a “jukebox” display or dial the ’50s Western TV shows you liked best or learn about the life stories of more than 160 women honored in the Hall of Fame.

The museum was organized in 1975 by the late Margaret Formby in the basement of a library in her hometown of Hereford, Texas. When it became obvious the museum needed a larger venue, 35 cities in six states wanted it. The board chose Fort Worth, where the leading women of the town raised $21 million in private funds to build the 33,000 square-foot museum, giving it the most up-to-date displays. It opened in 2002 and quickly became a favorite destination in the city’s Western Heritage Center.

While the museum celebrates the courage and determination of women—often “ordinary women” who distinguished themselves doing “extraordinary things that needed to get done”—it also honors the wisdom and humor of women.

“You can’t trust a man cause a man will lie, but a gun stays beside you till the day you die,” go the lyrics of a Western song, and the museum directors found it such a fitting sentence, they put it on the wall. They also quote the “cowgirl spirit: I can do anything.”

Besides the permanent exhibits, the museum offers a full program of lectures, special displays and shows throughout the year, so there’s always something new.

And if you visit the women’s bathroom, you’ll find a hand-lettered sign that probably says it all: “Cowgirls are forever.”