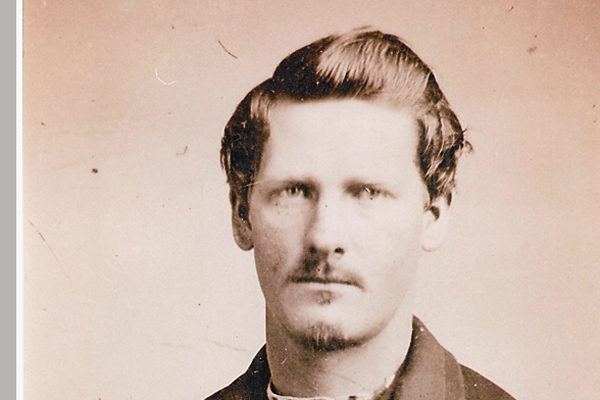 The most exciting new find is a never before published photograph of Wyatt  Earp and John Clum in a newspaper office in Los Angeles around 1907 or 1908.

Clum founded The Tombstone Epitaph and was a longtime Earp ally. Wyatt was close to 60 at the time of this photo. (Note his ornate watch fob and that he doesn’t appear to be wearing a wedding ring.)

The man in the center has not been identified, but the owner of the photo, Craig Fouts, says that the woman may be John Clum’s future wife Florence. At the time, however, John was married to his second wife Belle (who died in 1912). John and Florence obviously became great friends because, according to Earp historian Neil Carmony, they married in 1914. This photo is currently valued at $30,000.

In recent years, several other photos have surfaced of the legendary lawman. From left to right is Wyatt: in Lamar, Missouri, c. 1868 (he was probably 21 or 22 years old); in Wichita, Kansas (some speculate it may’ve been Peoria, Illinois), in 1874, at about age 24 (since this is a tintype photo, the image has been reversed to show how he really appeared); in Dodge City, when he was a policeman, 1876 and in a portrait studio, probably taken in the late 1920s.

It’s easy to understand why Wyatt Earp continues to fascinate us. Over the course of his life, his appearance has ranged from a possible pimp to a distinguished college dean look-alike.