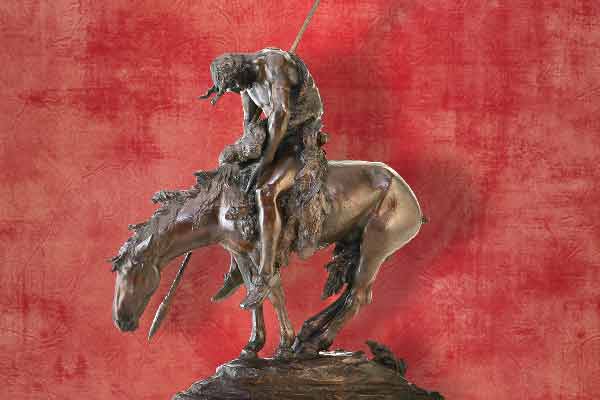 Downtrodden is the word that comes to mind while gazing at one of  James Earle Fraser’s most famous artworks. A fatigued horse, head lowered and tail between his legs, carries a rider

whose downcast gaze, slumped posture and limp spear communicated the end of the American Indian warrior—The End of the Trail, as Fraser named his sculpture.

On July 26, at Coeur d’Alene Art Auction in Reno, Nevada, a collector successfully bid $800,000 for one of the 33 casts of this sculpture made in 1918 by Roman Bronze Works, setting a new auction record for the artist.

But 1894, the year 17-year-old Fraser created the 18-inch model, was not the end of the trail for his artwork. Nor was 1915, the year his 18-foot-tall plaster won the sculpture department’s gold prize at the Panama-Pacific International Exhibition in San Francisco. Four years later, the statue stood in California’s Mooney Grove Park. The end of that trail became the National Cowboy & Western Heritage Museum in 1968, when the plaster statue stood as the focal point and heart of the Oklahoma City museum.

The trail far surpassed the artist’s original statue. In the 1930s, Hardy Murphy and his horse, Buck, mimicked the statue’s pose at rodeos, a trick later copied by Gene Autry and his horse, Champion. In the mid-1940s, the image was carved in a redwood in California’s “Trees of Mystery” highway attraction. In 1952, Roy Lichtenstein painted pop-art versions of The End of the Trail, followed in 1970 by Fritz Scholder. The following year, the Beach Boys popularized the image in the group’s album cover art for Surf’s Up.

Since Fraser never had the artwork copyrighted, despite encouragement from the San Francisco Historical Society in 1916, the statue was recast as bronzes, like the one auctioned off, and the image is reproduced to this day on bookends, lamps, belt buckles, key chains and earrings.

The artwork’s trail had begun after Fraser attended the 1893 World’s Columbian Exposition in Chicago, seeing bronzes that included Alexander Phimister Proctor’s Cowboy, of a rider attempting to rein in his horse, and Cyrus E. Dallin’s Signal of Peace, of a Sioux chief astride his pony and raising a spear into the air. The show evoked for Fraser a childhood memory of a Dakota Territory trapper telling him, “The Indians will someday be pushed into the Pacific Ocean.” When the 17 year old created his model in 1894, he probably had no idea that his image would be so widely replicated into the 21st century, or that one of the casts would garner nearly a million dollars at auction.

The auction house realized $30 million in sales of classic and Western American artworks for the second year in a row.