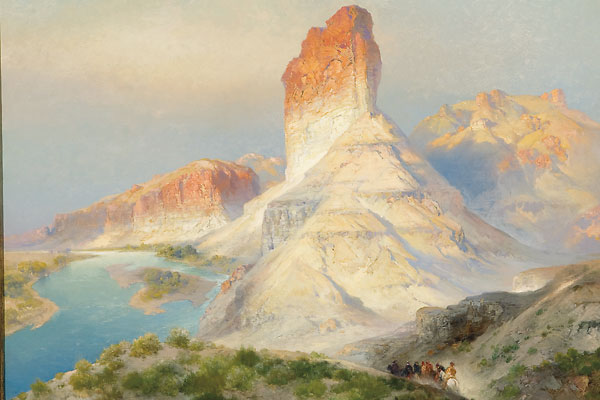 The moonlit views the artist saw from his skiff as he paddled near his retreat, Inglenook Island, inspired Frederic Remington’s first nighttime paintings.

Both of these paintings—The Wolves Sniffed Along the Trail but Came No Nearer and Pretty Mother of the Night—hit over the million-dollar mark at the Scottsdale Art Auction in Scottsdale, Arizona, on April 2, 2011.

This gritty perspective of the West’s Indians was unlike any Remington had portrayed in his art before. After all, he was a changed man. From his experience as a journalist covering the 1898 war in Cuba, he had shaken his father’s heroic vision of the Civil War and seen for himself the hellish reality of battle. “All the broken spirits, bloody bodies, hopeless, helpless suffering which drags its weary length to the rear, are so much more appalling than anything else in the world…,” he wrote to his wife, Eva, in July 1898.

He lit on the proper way to depict the danger that lurks unseen when he saw an 1899 exhibition at New York’s Union League Club. Artist Charles Rollo Peters, who had studied James Whistler’s nocturnes in Paris, was showing his moonlit scenes of California missions.

Remington began sketching his own night scenes, sharing his experience with his writer friend Owen Wister on September 1: “Just got back from 2 months in Montana and Wyoming—trying to paint at the impossible—had a good time—as Miss Columbia said to Uncle Sam ‘That was my war’—that old cleaning up of the West—that is the war I am going to put in the rest of my time at.”

Those first nocturnal paintings would illustrate Remington’s novel The Way of an Indian, which he began drafting in 1900; it finally saw publication in 1906.

The following year, when his nocturnes were exhibited at New York’s Knoedler Gallery, the artist reached critical acclaim. “In these night scenes there is a marked forward stride in the rendering of atmosphere, the color is more expressive, and less painty, the brush work is looser, even the drawing is better, and the whole has a breadth and freedom of execution that may presage great things for Mr. Remington if he chooses to follow this path seriously,” reported The New York Times on December 5, 1907.

Remington was pleased that art critics had finally exalted his status  from a mere illustrator to a fine painter. Yet he would not follow his path of success for long, dying prematurely at the age of 47 in 1909.

Nancy K. Anderson, who organized the National Gallery of Art’s 2003 exhibition of Remington’s nocturnes, noted why these night scenes still have an effect on us to this day: “Astonishing in their coloristic effect, the paintings reflect an artistic consciousness tempered by war and loss. Stripped of extraneous detail, the paintings are modern in their spare compositional structure and in their anxious uncertainty.”

If not for Remington’s time in Cuba, he may never have earned critics’ recognition as an esteemed painter of, not only the West, but of the American experience. After all, as Anderson noted of the artist’s nocturnes, “Filled with danger, threatened violence and menacing silence, they mirror—metaphorically—Remington’s experience in war.”

The bidding total for Scottsdale Art Auction came in at $13.4 million.