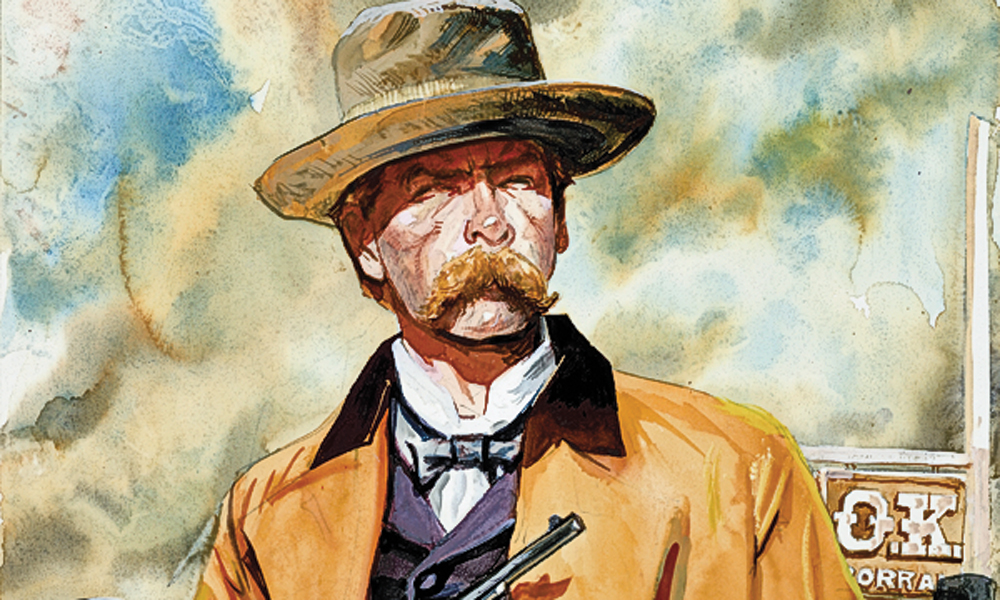 “Three Men Hurled into Eternity in the Duration of a Moment”

The Earp brothers and John Henry “Doc” Holliday confront the Cowboys in the vacant lot between C.S. Fly’s Boarding House and the house of former Mayor William Harwood, west of the rear entrance of the O.K. Corral, in Tombstone, Arizona Territory. It is a narrow, 18-foot space, which is somewhat ironic considering Ike Clanton’s earlier boast: “All I want is four feet of ground.”

“Boys, throw up your hands,” Marshal Virgil Earp demands. “I want your guns.”

Nervous about the confrontation and sensing the bristling attitude of Morgan Earp and Holliday, Frank McLaury says, “We will,” and makes a motion to pull out his revolver. Holliday makes a sudden move toward Tom McLaury, thrusting the shotgun at him in a threatening manner. Wyatt Earp jerks his pistol from his coat pocket, and Billy Clanton pulls his revolver at the same time.

“Hold on, I don’t want this!” says Virgil, realizing the situation is slipping from his control.

Two shots ring out, almost as one, followed by a long pause. Frank McLaury clutches his stomach and staggers, as the firing becomes general (Ike Clanton flees once the shooting starts).

Some 30 shots are fired in less than 30 seconds. The most famous and over-analyzed fight in the West is over. The repercussions are only beginning.

Some believed Frank McLaury did all the damage. His shots hit Morgan Earp across the shoulders, Virgil Earp in the right calf, John Henry “Doc” Holliday on the hip and punctured Wyatt Earp’s coat, missing him by an inch. Had Frank not been gut shot in the first exchange, he might have killed them all.

Camillus S. Fly ran out from his boarding house and took the pistol from Billy Clanton’s hand. As he gasped for air, the dying Clanton gamely asked for more cartridges.

The Vizina Mine whistle blew, signaling the Vigilance Committee to assemble for an emergency. Within minutes, they were mobilized by twos on Fremont Street. As 70 armed men converged on the scene, the Earps and Holliday anxiously realized they were out of bullets and wondered if the approaching throng was friend or foe.

Cochise County Sheriff John Behan stepped out from hiding and tried to arrest Wyatt, who replied, “I won’t be arrested now. You threw us, Johnny.”

The wounded Earps were taken to a “drugstore” uptown where their wounds were treated. Virgil and Morgan were loaded in a hack and pulled by hand to their homes at First and Fremont Streets. The lifeless bodies of Billy Clanton and Tom and Frank McLaury were taken to the Dexter Corral and placed in a back room to await the undertaker.

Billy Clanton lingered for half an hour, thrashing around and yelling. “They have murdered me!” he screamed.