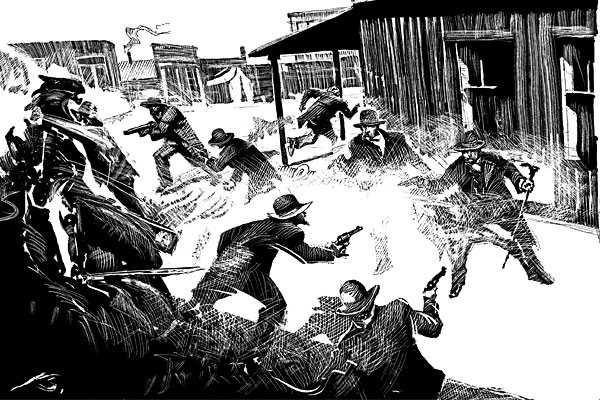 First of all, it didn’t happen in the O.K. Corral.

The fight happened down the street from the rear entrance to the O.K. Corral, in a side yard, next to Fly’s Boarding House. But that’s not going to fit on the movie marque, is it? “Gunfight at the O.K. Corral” sounds much better.

How would you like to be judged by 30 seconds of your life? That is what happened to Wyatt Earp. And the aftermath? According to legend, Wyatt Earp made Tombstone safe from outlaws, but for the Earps, the reality of what actually happened could not have been worse for them personally. All of their dreams of financial security and establishing a home base were dashed in the 30 seconds of gunfire. Virgil lost his job as city marshal; even after the Spicer Hearing exonerated the actions of the Earps, Virgil’s appointment as chief of police was not renewed. To make matters worse, anyone associated with the Earps was trounced in the next elections (even statewide!). The Democrats simply said a vote for their Republican opponents was a vote for the Earps’ tactics.

In spite of serious death threats, the Earps stayed in Tombstone and tried to weather the storm, but they paid for their stubbornness with the death of Morgan and the crippling of Virgil. Although Wyatt went on his infamous “vendetta ride,” he left the state as a fugitive on two murder charges. Essentially, the Earps were driven from Tombstone and Arizona.

Late in life, Wyatt tried to cash in on his life story. Others were making money off of the Tombstone story, and he rightfully wanted to get paid. All of his efforts failed. Of course, after Wyatt died in 1929, Stuart Lake wrote a best-selling book about Wyatt. (Lake did split the book profits and movie rights money, some $7,500, with Wyatt’s common-law wife Sadie.)

Thanks to the book, Wyatt’s image grew and grew. By the late 1950s, with several TV shows poaching on his story (in addition to the Life & Legend of Wyatt Earp, Gunsmoke and Tombstone Territory both used elements of Wyatt’s story), he ended up standing shoulder to shoulder with Buffalo Bill, Wild Bill Hickok and Jesse James. Authors Walter Noble Burns and Stuart Lake, and director John Ford, among others, helped make the O.K. Corral and Wyatt Earp icons.

As author Jeff Guinn concluded in his new book, The Last Gunfight, Wyatt would be “pleased by the way everything turned out, except for the fact that he never made any money from it.”

Everyone Gets Rich, Except Wyatt

Starting just after Wyatt Earp’s death, the movie machine got going. As of today, about 55 films and TV shows have been based on his life. The 1993 movie Tombstone grossed $56.5 million at the box office, while 1994’s Wyatt Earp grossed $25 million (and that’s not counting all the DVD sales). Many authors, producers and actors have made a killing on portraying Wyatt and his brothers, and Doc Holliday.