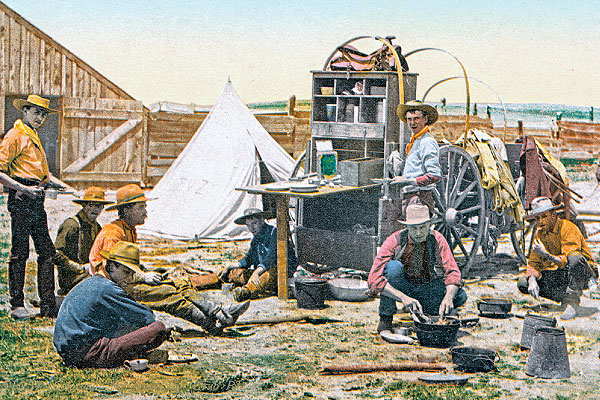 Vanette Johnston was moved to tears when Western Writers of America (WWA) inducted her late husband Terry C. Johnston into the Western Writers Hall of Fame during the annual convention in Las Vegas, Nevada, in June 2013.

More than 50 writers hold places in the Western Writers Hall of Fame, which was first started in 1980. They have collectively produced some of the finest novels, histories, poems, and stories over the past century, giving reading pleasure to millions of people around the world.

I set off to see some of the country these writers have utilized as settings for their work.  I selected just a few of the members in the Hall of Fame for this particular journey and began the trail in Jamestown, North Dakota, which celebrates the fact that Louis L’Amour was born and lived here during his youth.

At Jamestown’s re-created prairie town are buildings from frontier villages in North Dakota, one of which is dedicated as the Louis L’Amour Writer’s Shack. The space highlights the town’s most well-known resident and has a complete collection of L’Amour’s works.  When here, you can see the sculpture identified as the World’s Largest Buffalo Monument, and nearby you can view a herd of live buffalo. A walking tour of Jamestown also takes you to L’Amour’s childhood home, the elementary school he attended and the church where his family went to services.

L’Amour, arguably the most widely published Western author in history, gave us such characters as the Sacketts who came to life on the page in his 17 books about the family, and in films starring Sam Elliott and Tom Selleck among others.

Although he had early books published under pseudonyms, the first novel published under L’Amour’s name, Westward the Tide, came out in 1951, published by World’s Work. The following year Collier’s published his short story, “The Gift of Cochise,” which was soon purchased for screen rights by John Wayne and Robert Fellows. They paid $4,000, changed the name of the main character from Ches Lane to Hondo Lane and brought it out as the film Hondo, with L’Amour retaining the rights to novelize the screenplay, which he did under the same title in 1953.

This prolific author drew his stories from people he had met while living in North Dakota, Texas, Oklahoma, and California. Other stories that found their way to the theater or television screen include Crossfire Trail, Shaughnessy, The Quick and the Dead, Down the Long Hills, and The Shadow Riders.

L’Amour eventually wrote 100 novels and more than 250 short stories, and has sold well more than 320 million copies of his work around the world. While L’Amour himself called his books and stories “frontier fiction,” most categorize them as traditional Westerns often following the theme of a hard-riding cowboy aiding a ranch woman in distress.

In 1982, L’Amour won the Congressional Gold Medal, and two years later he received a Presidential Medal of Freedom from President Ronald Reagan. While the writer’s roots were in North Dakota, he traveled widely and died at his home in Los Angeles in 1988. He was buried in the Forest Lawn Memorial Park Cemetery in Glendale, California.

From North Dakota I head west into Montana where the newest inductee into the Western Writers Hall of Fame, Terry C. Johnston, made his home.

Johnston was a car salesman for a time, but stepped onto the Western writing stage in 1982 with his first novel, Carry the Wind, which won the Medicine Pipe Bearer’s Award for Best First Novel from WWA. He went on to write another 30 novels with more than 10 million copies in print. He is known for his mountain man/fur-trapper books of the early Western frontier. His central character of the “Mountain Man” series, Titus Bass, captured the attention of readers from all over the world. In addition to Carry the Wind, titles include Borderlords, One-Eyed Dream, Dance on the Wind, Buffalo Palace, Crack in the Sky, Death Rattle, and Wind Walker.

The 16 books in Johnston’s “Plainsman” series featured the fictional character Seamus Donegan, who was placed within different battles and confrontations that occurred all across the Northern Plains. The settings for these books included the locations where the frontier Indian war battles like the Fetterman (near Buffalo, Wyoming), Wagon Box (near Story, Wyoming), and Little Big Horn (near Hardin, Montana) occurred.

The Billings writer based his “Sons of the Plains” series—Long Winter Gone, Seize the Sky and Whisper of the Wolf —on George Armstrong Custer.

A.B. Guthrie was an infant when his family relocated to Montana. He would spend part of his childhood in California, but the Montana landscape led to his best-known book, The Way West, a broad-scope story of westward expansion, for which he won a Pulitzer Prize, and The Big Sky, a story centered on the mountain men. Guthrie spent years outside Montana as a newspaper editor and reporter, but his success with The Way West allowed him to return to the West, settling in Choteau, Montana.

Guthrie would later write These Thousand Hills, The Last Valley and Fair Land, Fair Land, along with a number of mysteries set in the West, poetry, and his autobiography, The Blue Hen’s Chick.

To get a sense of the landscape the characters from Guthrie’s novels may have inhabited, drive north from Billings to Lewistown,  then west to Great Falls and Choteau, before heading southwest through Helena and Three Forks to continue south through West Yellowstone and into Idaho. The mountain men Guthrie and Johnston wrote about could have been drawn from the real characters who held rendezvous in Pierre’s Hole, today’s Island Park, Idaho.

Continue into the heart of the mountain man country by crossing Teton Pass and into Jackson Hole, a place intrinsically tied to Hall of Famer Jack Schaefer because of Shane, the film starring Alan Ladd and Jean Arthur, drawn from his novel, which was set in Wyoming. Guthrie wrote the screenplay.

Old-timers from Jackson Hole recall the filming of Shane and how ranchers in the area around Kelly rented their farm animals for appearances in the movie. Another of Schaefer’s novels, Monte Walsh, has been produced as a film twice: the first in 1970 starring Lee Marvin, and in 2003 for TV, featuring Tom Selleck.  Schaefer, a journalist with United Press International news service, later lived in Santa Fe. He wrote novels, plays, nonfiction articles and books, a children’s book, The Plainsman, and a collection of biographical sketches, Heroes Without Glory: Some Good Men of the Old West.

Wyoming inspired Easterner Owen Wister, the man often credited as being the father of the Western novel. He visited Jackson Hole in 1887 on a big game shooting trip with a friend. The two spent more than a month in northwest Wyoming, particularly at Brooks Lake, which is still a remarkable place to visit, traveling through Yellowstone and the Absaroka mountain range.

Of Jackson Hole, where Wister would return with his own family, he wrote in a letter to Fritiof Fryxell on November 26, 1929: “That region is the country I have loved best in the world. Were there any part of my life I would live again, it would be the time spent there. In 1888, the camp between String and Jenny Lake, at the edge of the pines where the creek enters them for its final descent into Jenny Lake, I climbed to the rocky scoop where the real steepness of the Grand Teton begins—and came down again ingloriously.”

Wister did not visit Cody, but that’s where I head to the McCracken Research Library at the Buffalo Bill Center of the West, which has a small area devoted to the Western Writers Hall of Fame. The library collections include works by many of the women and men who have been inducted into the Hall of Fame. This is a research library, so you should call ahead if you wish to see any of the volumes held here.

From Cody, I travel east across the Bighorn Mountains to Buffalo and the Occidental Hotel, one of the places Wister visited on his own travels through Wyoming. Traveling north of Buffalo to Fort Phil Kearny and the site of the Fetterman battle, I am in the territory Johnston used for his novels involving the Plains Indian Wars. But then I turn south through Casper, site of the Goose Egg Ranch, a location used in Wister’s classic novel, The Virginian. I travel next to Medicine Bow, home of the Virginian Hotel, where you’ll find a hand-painted mural dedicated to Wister’s novel, and a suite in the old hotel dedicated to Wister himself.

The American Heritage Center at the University of Wyoming in Laramie has Wister’s pencil-written diaries of his time in the West and also what are believed to be the only two pages of pencil manuscript of The Virginian that exist.

From the grasslands of North Dakota and Montana, to the mountains of Wyoming and Idaho, these great writers of the American West spun stories, created iconic characters, and collected stories of the real people who shaped the West. They have inspired readers, as well as writers, who strive for their own opportunities to bring the landscape of the West to the printed page.