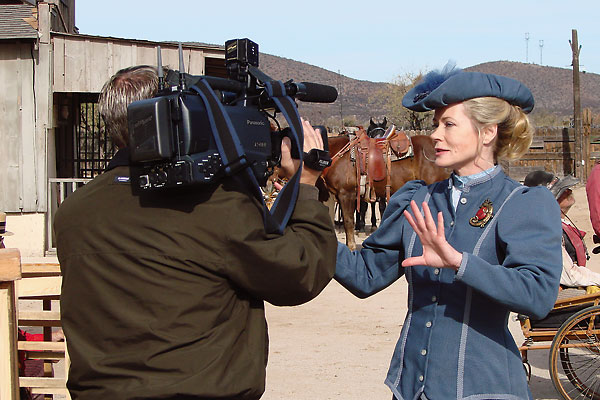 Gammons Gulch is not entirely real; movie sets generally aren’t, but this collection of buildings and props, encompassing a chunk of American myth and history that reaches from Billy the Kid to Bonnie and Clyde, is unreal in a completely unique way.

The place sits up in a kind of mid-level bluff, just visible from the road that runs a short distance north of Benson, Arizona. It’s bright and breezy here, and the wind kicks up piles of yellow dust throughout the afternoon. On the grounds are Tommy Guns, a 1931 Buick, empty cans of Prince Albert tobacco and poles that came from the original Clanton family ranch near Tombstone. Gammons Gulch is a museum, a working film set and a tourist attraction.

On this December afternoon technicians are running about, lights are going up and going down, women in period lingerie are being made up in a room full of gangster memorabilia and some extras in full cowboy drag are tossing a football, unmindful of heaps of road apples (horse manure), while other actors are practicing their knife throws and bullwhip snaps. As Rod Serling used to say of The Twilight Zone, “this is the dimension of imagination.”

If You Build It, They Will Come

Jay and Joanne Gammons actually live at Gammons Gulch, in one of the buildings. Their mission and life’s work is to make the place attractive to both tourists and commercial enterprises. They recently constructed an entire saloon to accommodate the movie that is currently being shot, The Gundown. This classic Western will offer a few modern twists, and it stars Peter Coyote, William Shockley (Dr. Quinn, Medicine Woman), Sheree Wilson (Walker, Texas Ranger) and Andrew Walker.

Dustin Rikert, the director, cowriter and coproducer of the movie, has just finished shooting a scene inside the new saloon. He releases his crew and cast for lunch before coming over to talk with me.

“Jay and Joanne are incredibly kind and decent people, and I’ve visited this set over the years. But the biggest snag in working here was the lack of a big-time looking saloon. I made an earlier Western, Ghost Rock, and I coproduced another, Dual, and so I’d been wanting to make another Western. William Shockley and I had some ideas we wanted to set in motion, and I wanted to bring a production back to Arizona. I came to the Gammons and I said, ‘I want to film in your town and to do that, we’re going to need a saloon.’

“So this community rallied together with the Gammons—they got it down, using an original design I had. I’ve shot in a lot of sets, so I had a clear idea of what was needed to make the building film-friendly. It had to have a certain height for jibs, specific distances between rafters to accommodate lights and lighting clamps, and I wanted it to have different levels, so we built a high-roller section. There really is a special feeling shooting in a saloon that was built initially for our movie, but you’ll hopefully see it in many movies to come.”

Rikert is in his element, and it’s clear that Westerns hold a special place in his life. “I’ve always loved the Westerns genre. To be honest, if somebody put a gun to my head and said you have to live and make movies in one genre, it would be Westerns, hands down, for me.

“The problem is, Westerns in some ways, are in decline because as the baby boomers get older and the younger generation comes in, there’s no Western TV shows. The younger generation is not buying into Westerns because there are none being done. I don’t think they’ll ever die out because you get big enough names and a cool enough concept, you can make it work, regardless of time period. But you got to do Westerns that are marketed toward the younger demographic too, in hopes of getting them pulled in.

“The goal of this production is to create some Old West/Indiana Jones-esque action that’s gritty—no CGI—just a gritty shoot-’em-up, but with a great, compelling story. Have a Gene Hackman-esque character, that’s the William Shockley character. And when I mention Hackman, I’m talking Unforgiven, Quick and the Dead, these evil patriarchs. We’re trying to go with that, give the picture that feel for the audience.”

As the break ends, the cast and crew head back to work, and I’m given the opportunity to watch a few minutes of filming inside the new saloon.

The Gundown is set in  the Arizona desert in 1893. The plot focuses on an  ambitious and ruthless saloon owner, Travis McCain (Shockley), who has come to oppose the more benign Thomas Morgan (Coyote), who runs the other tavern. Morgan’s wife Sarah (Wilson) stands by her husband even though she has obviously noticed some hints of impropriety between him and a “soiled dove” Cassey May (Allison Gordon). Thrown into the conflict is Cole Brandt (Andrew Walker), a dispirited range detective and loner who is still grieving for his dead wife, and Newman Hicks (Paul McCarthy-Boyington).

Says Rikert: “We kind of wind up having a dynamic duo in this film in terms of our young gunslingers. We have Cole Brandt, a kind of a loner, drifter. And we have Newman Hicks, a guy who lives in town and works for Thomas Morgan. Morgan’s a kind of mentor to Hicks, an aw shucks quiet type, and later Hicks ends up teaming up with Cole Brandt.”

Hicks and Brandt join forces to go to war against Morgan’s saloon adversary McCain, with the goal of saving the Arizona town of Dead River.

The scene I am observing, like 90 percent of filmmaking, is a snippet of nothing: extras are scattered around the barroom, Coyote is perched in the corner at a private table, Gordon enters the room, crosses and speaks to Coyote before exiting the frame. Coyote lights his cigar. A grizzled extra in full costume—who apparently doubles as a production assistant—stands in the middle of the street outside and yells for quiet. The world stops, the camera moves across the room, the actors do their business and the director yells “cut!”

On the second take, Jay Gammons gets his cameo as the piano player in the scene, and in fact, he’s a fine musician. It turns out he’s been entertaining the cast and crew on the old barrelhouse piano throughout the production. Jay, as a kid, actually had a small part in Rio Bravo, which was shot at Old Tucson Studios. He can be seen running around Gammons Gulch in his straw hat (skimmer), bright red shirt and white suspenders, with his stubby cigar usually in need of a light.

As I talk with Shockley, it becomes clear to me that these actors, Director Rikert and Producer David Bennett are starting to form a group.

Most audiences will remember Shockley best from his time on the series Dr, Quinn, Medicine Woman. “I was Hank Lawson, the saloon and brothel owner. I was the antagonist in the series, and I stirred the pot on a weekly basis. That was awesome fun. I love playing cowboys, for openers. The Gundown is my third period piece in the Old West, and I’d be thrilled to get another series that lasts 10 years. I enjoy that period in American History. I think it was very honest, very simple. A man was a man; a woman was a woman. If you stole a man’s cow you got shot or hanged, there wasn’t much to question. I just enjoy the rawness, the simplicity.”

He adds, “It was tough, laden with problems, but it was what it was. And I like wearing a gun. I like smokin’ and spittin’ and cussin’. I’m just an old Westerner at heart.”

Shockley seems to be especially at home as a Western villain.

“It’s what I do best, or so I’ve been told. I love it. There’s no boundaries—that’s what’s good about it. The good guy has boundaries, generally. The villain gets to push the envelope. There were laws for the cowboys; it was a little more black and white. But for the bad guy, it’s life on their terms.”

Peter Coyote is one of America’s great unsung treasures, appearing in parts both large and small in dozens of movies for more than 30 years, including E.T., Jagged Edge and Erin Brockovich. Of his Western characters, he’s played Jim Bowie, Buffalo Bill Cody and, on the series Deadwood, Gen. George Crook. Coyote, who is held in particularly high regard as an actor in Europe, is also the voice of Ken Burns’s multi-part PBS documentaries, and he has narrated dozens of other documentaries over the years.

In The Gundown, Coyote has top billing, yet Rikert managed to get all of Coyote’s scenes done in two days. I ask Coyote how he got involved in the movie.

“Really it’s about supporting William Shockley,” he admits, “because Bill and I did a TV movie [Last Will] that hasn’t been released yet. We also have the same voiceover agent, and we get along; we have a lot of similar values.

“I do have a love for Westerns. My dad raised cattle, and I grew up around horses and cattle in the Delaware Water Gap in Pennsylvania. We had another ranch in Harlingen, Texas, because he had a business partner down there. All little kids want to be cowboys, and we had cowboys running around the place. I was never a great athlete, but I know how to rope and dally and I’ve worked cattle, so it’s fun to come out here and work out these fantasies and just get paid for it.

“I like Westerns, but I really like Bill Shockley. And I like this guy Dustin. You know, my wife was the film commissioner of San Francisco, and it cost her four years and blood to get a two-percent rebate out of San Francisco to attract production companies. So here we are in Cochise County, and these guys have built this little village—they’ve ponied up money, they’ve built the bar. These cowboys and farmers, they understand the utility of film. As much as anything I want to come here and support that community.”