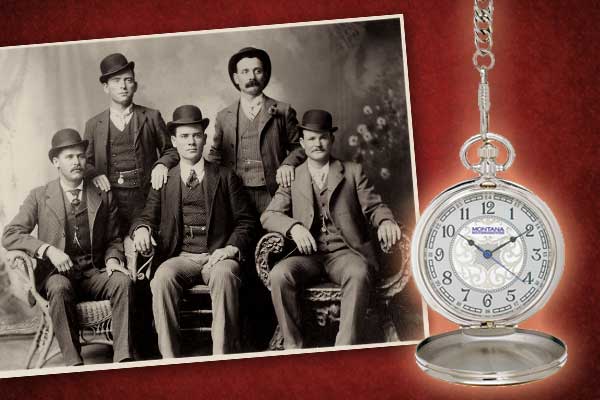 The infamous Wild Bunch made a trip to Fort Worth, Texas, in November 1900 to attend the wedding of gang member Will Carver to Callie May Hunt, one of Madam Fannie Porter’s girls from San Antonio.

Some historians surmise that the wedding inspired the dressed-up gents to venture into Swartz View Company on Main Street to get their photograph taken on November 21. Whatever the reason, that photograph would lead to the gang’s downfall after authorities got hold of it.

Dressed in the latest fashion, the Fort Worth Five sport new suits, vests and derby hats. Each also showed off his pocket watch featuring a decorative fob.

Such timepieces had been half a century in the making. Until about 1850, pocket watches required keys to keep them wound. After some of the first keyless wind watches were introduced to Queen Victoria at the 1851 Great Exhibition in London, decorative watch fobs came into fashion. Wearers expressed their personal style by adorning these fobs with lockets, coins, monograms and other keepsakes, as holds true for the fobs worn by the gents in Butch and Sundance’s crew.

Despite mass production in the 1850s, pocket watches remained a luxury item on the American frontier. Trappers, farmers and ranchers had little need to know the day of the week, let alone the precise time of day. Westward expansion was regulated by the pocket watches of train conductors, bankers and miners. As civilization took root out West, most everybody began keeping time.

By the turn of the 20th century, watches small enough to wear on the wrist became a fashionable item for women. These wristlets were considered too feminine for men. The needs of modern warfare changed that, and military officers started wearing wristwatches during WWI.

By the mid-1920s, wristwatches were all the rage for both sexes. Pocket watches continued to be important among blue-collar workers even after WWII. That tiny fifth pocket on your five-pocket jeans for a pocket watch is truly an anachronistic holdover from an earlier era.

Pocket watches are still widely available as a Western accessory, even though many of us now pull a smartphone out of a pocket to check the time. Several companies still make pocket watches, including Montana Silversmiths, which produces pocket and wrist watches with Western styling. Western-styled wristwatches are also available from companies that include Vogt Silversmiths, Catena, Select Lines and Cimarron River Company.

Watchbands made by numerous silversmiths and leather companies can provide authentic Western styling to conventional watches and chronometers, as well (although a cheap digital watch attached to a turquoise-encrusted silver band is widely regarded as a Western fashion faux pas).

Whether you’d like a pocket watch similar to those worn by the Fort Worth Five or a more conventional timepiece, pick out something that will put you at peace with time.