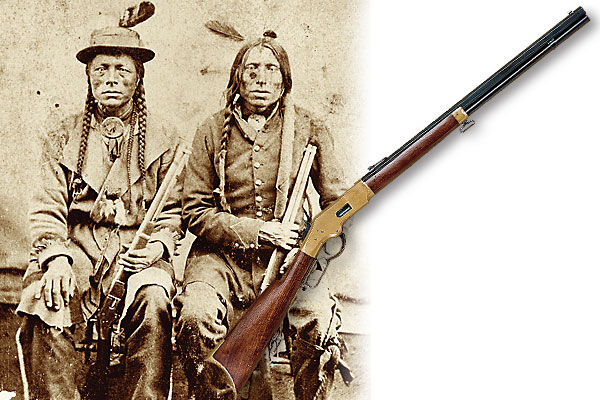 Best known as the “Yellowboy,” an affectionate moniker frontier Indians gave the repeater due to its shiny brass receiver, the Model 1866 was produced by Winchester until 1898. In its 32 years of production, more than 170,000 of these .44 rimfire, lever-action rifles left the factory, with many shipped to the West to play their part in settling that untamed region.

A number of these went south of the border to be used by both sides during Mexico’s 1860s fight against the French.

Winchester first called this model the “Improved Henry.” Its most notable enhancement over the Model 1860 Henry included: the receiver-mounted, King’s patented, spring-tempered loading gate, the wooden fore-stock and the under barrel closed magazine tube that was open only at the rear, where it entered the receiver (the Henry’s tube was open its entire length, thus subjecting it to dirt and debris). The rifle updated to its Model 1866 name after the introduction of its successor, the iron-framed 1873 model.

The Model 1866 also has the distinction of being the first rifle to bear the Winchester name. The rifle was fitted with a 24-inch octagonal barrel, which held 16 cartridges (with one in the chamber), while the 20-inch barreled carbine held 13 rounds.

Despite its relatively low-powered loading of a 200-grain lead bullet, backed by around 26-28 grains of blackpowder, the Yellowboy remained a favorite throughout the Old West era and consistently proved to be a trusty companion to Westerners. As testimony to the esteem of the Model 1866, they were put to work in the hands of outdoorsmen of all breeds, including military officers, cowboys, Indians and several Union Pacific Railroad special agents. Perhaps most notably, the rifle served as the principal arm for the two expeditions that explored the Colorado River region in 1869 and 1871.

Frontiersman William E. Webb recalled that his ’66 carbine “weighed but seven and one-half pounds,” and “…could be fired rapidly 12 times without replenishing the magazine….” He further recalled that he “often held it out with one hand like a pistol and fired.”

If any Winchester truly deserves the title of the “Gun that Won the West,” it would be the Model 1866. It was not by accident that in 1973—long before anyone ever heard of cowboy action shooting—the late Val Forgett introduced the first metallic cartridge lever gun replicas, with one of them being the Model 1866 “Yellowboy,” chambered for the smokeless .44-40 centerfire (.44 WCF).

Since those early years in the age of replicas, the ’66 model has continued to hold its own as a favorite with cowboy action shooters, cowboy mounted rifle shooters and Old West gun buffs alike. As the old-time Plains Indians said, “Yellowboy, one heap good gun!”

These Gros Ventres are armed with 1866 Winchester “Yellowboy” carbines, favored by Indians not only for their rapid fire capabilities, but also for their colorful brass receivers as well.