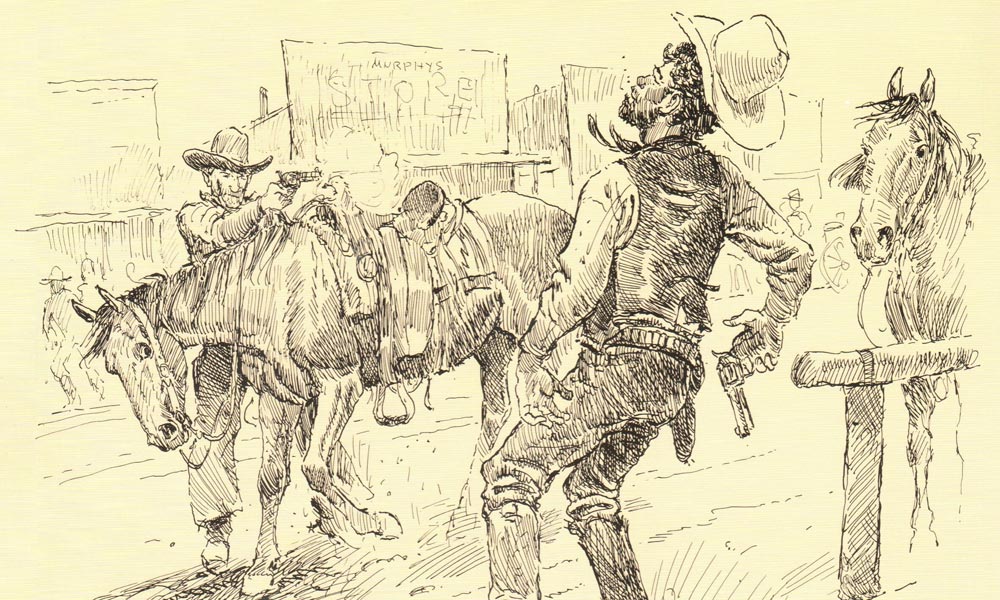 Galeyville, on the eastern slopes of the Chiricahua Mountains wasn’t much different from other tent camp mining towns in Cochise County. The community was born in 1880 when John Galey found silver deposits. Galey was from Pennsylvania and like most easterners, believed every coyote hole in southern Arizona was a potential bonanza, especially this one because it was only sixty miles, as the crow flies from Tombstone. He secured some financial backing and laid out a townsite.

Before long Galeyville boasted eleven saloons and other various sundry businesses. The boom lasted only about a year before the silver played out. Galeyville was on its way to becoming a ghost town when a pack of outlaws led by Curly Bill Brocius from over in the San Simon Valley decided to take up residence. Many of them were refugees from the Lincoln County War over in New Mexico and their stock in trade was cattle rustling. The U.S. Army and Tombstone butcher shops were paying cash for beef on the hoof and no questions were asked as to where the cattle came from.

In 1877, Wells Fargo transferred shotgun messenger and former California peace officer Bob Paul to Arizona. Three years later, Paul, who was a U.S. deputy marshal at the time, decided to run for Pima County sheriff on the Republican ticket. This was several months previous to the creation of Cochise County.

On Election Day, Paul appeared to be well ahead of his Democratic opponent, Charlie Shibell. However, the Democrats kept saying, “Wait until the returns from San Simon get here.”

The outlaws in San Simon turned out in numbers that far exceeded the number of voters in the precinct for the Democrat Shibell.

To make things even more suspicious, Ike Clanton was named the election inspector at the San Simon precinct and Johnny Ringo was one of the election judges. There were only about a dozen registered voters residing in San Simon but the election officials certified 103 Democrat votes for Shibell and only one Republican vote for Paul. It was enough to make Shibell the winner. After taking the matter to court Paul was declared the winner and took office in March, 1881.

On February 1st, 1881, Cochise County was created out of the eastern portion of Pima County. The newly-appointed Sheriff of Cochise County Sheriff was Democrat, Johnny Behan. He and his deputies were laisse faire when it came to policing the outlaws. Curly Bill even assisted Deputy Sheriff Billy Breakenridge when he came to the San Simon to collect taxes.

This cozy relationship with the law almost had Curly Bill pushing up daisies beneath the Galeyville sod when Lincoln County War veteran Jim Wallace came to town to hook up with the outlaws. Wallace had no love for lawmen and when Breakenridge came to town to collect taxes he made some threatening remarks and pulled his pistol.

“No Lincoln County hoss thief can come in here and abuse Billy,” he warned. “Breakenridge is our deputy and that suits us.”

For a while it looked like the matter was settled. The three went into the nearest saloon and shared a bottle of whiskey but after a few drinks, the always unpredictable Curly Bill became surly. Then, he jerked his pistol out and threatened to plug Wallace. Bloodshed was avoided when several of the boys separated the pair.

Wallace stomped out of the saloon, went to the livery stable and fetched his horse. He rode back up the street, dismounted and waited across the street from the saloon waiting for Curly Bill. When Brocius stepped through the swinging doors and saw Wallace with his pistol already drawn resting on his horses neck he went for his gun. Too late, a shot rang out and Curly Bill went down. The bullet went clean though one check and out the other side.

Several of Curly Bill’s friends grabbed Wallace and were planning to string him up, but when it looked like Bill was going to survive they let him go. One of the boys rode over to Tombstone and fetched gunshot physician, Doc Goodfellow and he rushed over to Galeyville to patch up the outlaw.

Many of Doc’s patients were miners and ranchers and oftentimes were unable to pay but the Outlaws always had plenty of hard cash on hand and paid on delivery.

Brocius lost a couple of teeth and had to spend the next few weeks with an awkward bandage tied around his neck to keep his jaw in place but otherwise, he was no worse for wear.