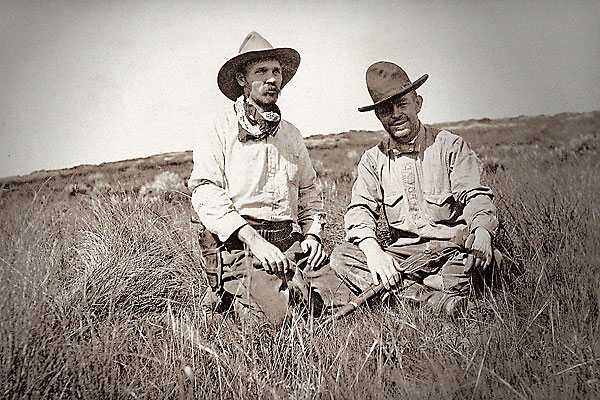 Arriving with his dad and uncle in 1889 to homestead the lower end of Utah’s Desolation Canyon where Florence Creek empties into the Green River, Jim McPherson could not have imagined that more than 120 years later his progeny would still be here, a continuing and permanent fixture on the east central Utah landscape.

One of the unique circumstances facing the McPherson homestead was that it lay directly in the path that outlaws like Flat Nose George, Joe Walker, Elzy Lay and Butch Cassidy used when making their escapes from the law up through Desolation Canyon to Browns Park. The McPhersons came to expect that whenever such characters showed up at their doorstep that a posse would be close behind.

The McPhersons walked a fine line living at the Florence Creek off-ramp to this outlaw interstate. Jim McPherson passed along the oral history from this period to his daughter Pearl and her husband, Budge Wilcox, who in turn passed it on to their sons, Don and Waldo, which Don gifted to his daughter Jeanie and her husband, Butch Jensen. As the current stewards, Jeanie and Butch ensure Jim McPherson’s rich stories remain alive and well today.

A good example of one such oral history has to do with the 1897 Castle Gate Robbery, where Butch Cassidy stole $7,000 in gold from the Pleasant Valley Coal Company. The McPherson history features a unique nuance to this event, which triggers discussion as to what occurred when Butch Cassidy, Elzy Lay and Joe Walker made their getaway.

Jim’s story is that Cassidy, along with his partners in crime, showed up at the Florence Creek homestead days after the robbery, after waiting overnight in Woodside, a railroad whistle stop (long since gone) that was located between the towns of Price and Green River. What they were waiting for was the Eastern Utah Advocate newspaper to arrive. The Castle Gate Robbery garnered Cassidy top billing, identifying him as the culprit and guaranteeing him historical bragging rights to the robbery. Cassidy proudly showed this newspaper to Jim McPherson after he and his partners showed up at the homestead, prompting Jim to ask Cassidy, “What have you guys been up to?”

One can only guess this same kind of bravado motivated Cassidy, along with the Sundance Kid, Ben Kilpatrick, Will Carver and Kid Curry, to have his photo taken at a studio in Fort Worth, Texas, in 1900. This photo made the Wild Bunch recognizable to the world.

In 1927 Jim sold the Florence Creek Ranch to Budge and Pearl Wilcox. In 1941 the federal government purchased it and bundled it with other appropriated private properties, and the ranch became part of the Ute Indian Reservation. Today the original Florence Creek Ranch is seen only by a handful of river rafters who put-in (river talk) the Green River at Sandwash for a five-day float trip down through Desolation Canyon where they take-out at Swasey’s Landing, just above the town of Green River.

Fast forward now to the 21st century—each June the Jensens push 500 mother cows and their calves up to the top of the Tavaputs Plateau to graze on rich summer grasses. Here they host guests at their lodge that sits perched on-top-of-the-world and looks east and down into Desolation Canyon and Florence Creek where it all began. Grazing their cattle here during the summer and out on desert during the winter in places with unique sounding names like Cisco, Sinbad and Icelander, the Jensens continue to add new chapters to a legacy that is an important component in the history of east central Utah and the American West.

The Ute idiom Tavaputs means “sunrise,” and the sunrises and sunsets seen from atop this plateau are but two of the awesome natural phenomenon that is routinely experienced by those staying at the Tavaputs Ranch During early autumn, outdoor sportsmen cough up huge sums of cash to have an opportunity to harvest one of the trophy bull elk that roam the plateau. Yet the Jensen cattle business is the apex of this top-notch, family-owned operation.

The Jensen ranch consists of 30,000 acres of private land (9,000 acres on the Tavaputs Plateau and 21,000 acres at Emma Park). Their winter range includes 280,000 acres of BLM land. They run 1,000 head of black Angus and Gelbvieh mother cows, and 70 bulls. During the summer the herd is split between Emma Park and the Tavaputs Plateau. Nowhere else is the rhythm and the cycle of life more evident than it is when the Jensens move their cattle to summer range and, in early October, when they bring them back to the desert for the winter. Here the cycle ends and another begins, as it has for more than a century.

In May the cows and calves are gathered on the desert and trucked to corrals near the coal mining town of Sunnyside, on the sunny side of the Book Cliffs where George and James Whitmore had established their cattle ranch in 1879. As soon as the snow in the higher elevations permits, a cattle drive begins that lasts several days and covers 25 miles. The drive starts at the old Horse Canyon Mine (long ago sealed shut). The first day the cows are pushed up and over Horse Canyon, and down into Range Creek, where they graze for a day as the stragglers catch up. The next day the herd is pushed up Sheep Canyon (a 2,500-foot elevation gain in 1.5 miles) along a trail that was carved out with a dozer in 1950.

With cows on the plateau, guests who are booked with river running companies, like Moki Mac & Holiday, begin arriving for a pre- or post-river-running ranch experience. They fly into the Jensens’ private air strip that sits at 9,500 feet, where the guests are met by Butch and Jeanie, and driven back to the lodge. One truly unique opportunity guests at the ranch have, and one that no one else offers, is a day-long tour down into Range Creek. Ten years ago the cliff dwellings, pit houses, granaries and petroglyphs of Fremont Man, who lived here a thousand years ago, were made known to the world. Until then it had remained a family secret. The private land that hid this secret was given by Jeanie’s side of the family (Waldo Wilcox) to the State of Utah, which has since opened it up on a limited basis to day hikes and Jeanie’s guided tours. Archaeological excavation in progress can also be seen. Range Creek is the place where Jeanie grew up, making it close to her heart.

The Jensens remain at the lodge for the next four months, hosting guests to horseback rides, fishing and sumptuous ranch-style meals (it’s like a cruise ship on top of a mountain). When the summer guests depart, the hunters begin arriving. All the while the calves are gaining huge amounts of weight because of the buffet of lush mountain grasses they feast on 24 hours a day. For those where the movie City Slickers resonates in a positive way, the June and October cattle drives are adventures the Jensens can also arrange.

Diligent and savvy ranchers, the Jensens received the Leopold Conservation Award in 2009, for their cutting-edge resource management techniques and their land ethics that are the waft and warp of the Jensen fabric. The Leopold Award summarizes this accomplishment best. “The Jensen’s [sic] commitment to the health of the natural resources on their land is truly exemplary. More importantly, they are dedicated to sharing their land management approach within and beyond the agricultural community and to passing their land ethic on to future generations.”