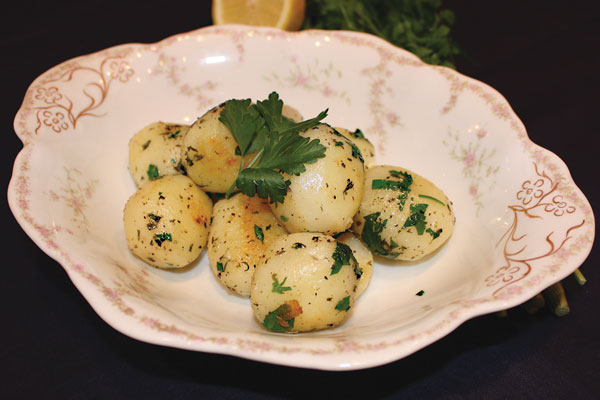 In the last 30 years, “…cookery has made immense strides thanks to the importation of French, Italian, German and English cooks, seconded by the efforts of travelled Americans who have learned that there are nutritious and palatable viands …beyond pork and beans, fish balls, clam chowder and pumpkin pie,” reported Texas Siftings magazine in 1886.

As the United States became home to international residents from Ireland, England, Germany, Switzerland, Italy, France, Russia and Belgium, Americans should not be surprised that a variety of foreign foods were eaten and served on the frontier. Foreign pioneers traveling along the trails would have made dishes they learned in their native countries. If they lived in or near cities, local merchants likely carried imported goods like: English tea, French mustard, Italian olive oil, chestnuts and macaroni, Swiss cheese and German sausages. Having these ingredients allowed home cooks and restaurant chefs to create international dishes all over the Victorian West.

South Dakota’s Aberdeen Daily News reported in 1900, “The supper and social to be given at the Masonic temple next Friday evening will be novel and interesting. Each dish on the bill of fare will be a German dish….”

Foreign influence in cooking was seen all over the West, but the most popular was the bon ton and tony French cuisine. It wasn’t just popular in the West, but all over America during this refined Victorian era. To show their level of sophistication, newspapers frequently printed restaurant menus or bills of fare in French. Patrons were either savvy, experienced diners, or they could rely upon the aid of the wait staff. The Grand Forks Herald joked about this when it reported, in 1887, “One who travels much in this country and stays at hotels gets the impression that the hotel-keepers are much more peculiar about choosing a printer than a cook…. We do not spare language—French, German, sometimes English, are impressed into the service.”

In 1897, The Dallas Morning News felt sorry for diners and published a guide to the French bill of fare to explain menu descriptions:

A l’Anglaise implies that the dish is boiled in the plainest manner.

A l’Italienne implies that the dish is made of or garnished with savory macaroni, or paste of that kind, or with ravioli, or is made with savory Parma cheese….

A la Provincal [sic] means a dish prepared with more or less olive oil and flavored with garlic.

A la Perigord is applied to dishes flavored with or consisting of truffles, from the circumstance that these mushrooms grow in that province.

A la Normandie indicates that apples enter into the composition of the dish….

A la Parienne [sic]  is applied to dishes that are generally luxuriously prepared, and overladen with expensive garnishes.

Add a bit of foreign flair to your menu and try an 1889 recipe for Pommes de Terre a la Bonne Bouche.

Boil the potatoes until tender. Drain and allow to cool.

Melt the butter in a frying pan over medium heat. Add the potatoes, sweet herbs, salt and pepper. Heat for about five minutes, shaking the pan. Do not stir the potatoes or they will break. Sprinkle with parsley and a few drops of lemon juice.