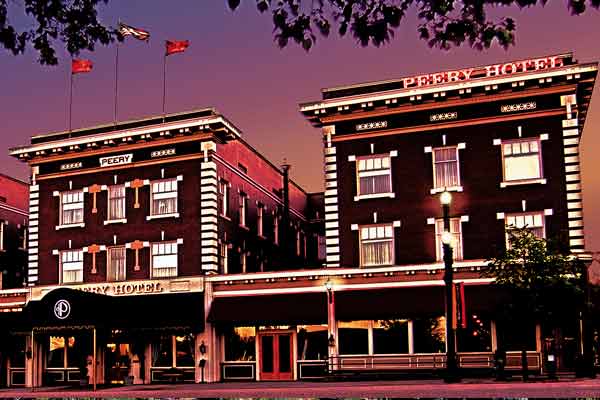 The state’s only hotel on the National Register of Historic Places opened its doors in 1910 and has been in continuous operation ever since.

Like many a Western hotel, the Peery, commissioned by brothers David and Joseph Peery, was built primarily to serve the region’s rapidly expanding business community. The Peery brothers were members of a prominent railroad family, says Kristofer Watson, the hotel’s director of marketing.

The hotel, a fine example of Prairie Style architecture, consists of three three-story wings connected by a spacious ground floor gallery that holds the establishment’s restaurants and its grand lobby.

The regionally renowned lobby is noted for its elegant staircase, classically carved railings, lathe-turned balusters and columns topped by intricate cornices. It has an air of understated Edwardian-era grandeur, which is why it’s such a popular place for weddings and other formal occasions. Over the years, many a debutante has descended that staircase on the arm of her proud father.

Each of the hotel’s 73 guest rooms, 10 of which are suites, have high ceilings, adding to the air of luxury, while the large windows provide unobstructed views of the Salt Lake City skyline and the majestic Wasatch Mountains.

Comedian Bill Cosby is among the notable guests who have stayed at the Peery over the years.

In addition to the Macaroni Grill, the Peery opened Virdene’s Restaurant Bar & Grill this spring. The casual eatery features gourmet burgers, salads and an assortment of appetizers. “It has kind of an old fashioned malt shop atmosphere,” Watson says, adding that the 60-inch plasma TVs make it a nice spot to watch sporting events.

The Peery Pub, a local landmark that operated in the hotel for decades, also recently re-opened.