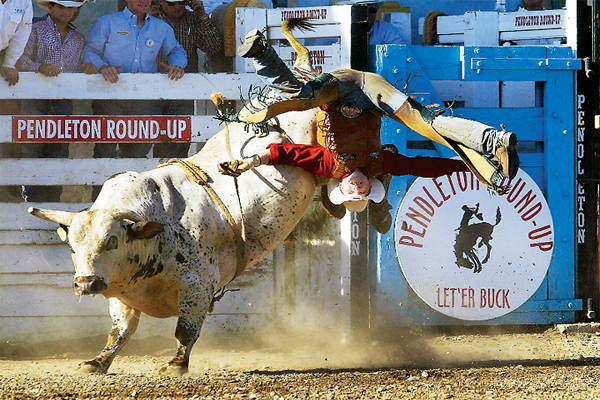 The Oregon Trail came right through the center of Pendleton, an Oregon cowtown that is full of Old West attractions, from the living quarters of Chinese laborers, to the Bannock War site, to the original factory of Pendleton Woolen Mills. Come September, Pendleton’s citizens help preserve their rodeo heritage with an annual roundup, first established after a successful celebration in 1909.

What’s the latest story everyone’s gossiping about? The Pendleton Round-Up is going to celebrate its 100th anniversary in 2010, so there’s lots of talk about plans for the year-long celebration.

Best Cowboy Bar: The Rainbow (209 S. Main St.), which has been in the same location for more than 100 years and has all kinds of cowboy memorabilia lining the walls.

Who is the person everyone in Pendleton knows?: Randy Severe, whose family has been making saddles for generations. He and his daughters sing and play fiddle, he is active in the all-volunteer Round-Up Association and many cowboys outside of Pendleton know him because he and his family have boarded them during the roundup at their “Hotel d’Cowpunch” at no charge for decades.

Best Route to Historic Downtown: Exit 209 off I-84. Head downhill (to the north) at the exit, take the first left onto Isaac Ave. and turn right onto Main Street. The historic district is just three blocks ahead, across the railroad tracks.

Where do the locals eat?: Raphael’s (233 SE 4th St.). I recommend the local wild mushrooms in the chef’s special sauce.

What historic sites do most of the schoolchildren visit?: The Pendleton Underground Tours and Tamastslikt Cultural Institute (see longhouse lodge poles below).

What’s the most popular local event?: The Pendleton Round-Up (below left), a four-day rodeo that occurs the second full week in September. Tradition is king here—no advertising is allowed in the arena and the grass infield closely mimics the original conditions cowboys encounter on a daily basis when dealing with their herds.

Historic Restoration Plans: An Urban Renewal District is currently being funded through grants and will pay for restoring the facades of historic downtown buildings. Walking tours for downtown are also being developed so we can share the stories of the buildings and the people who lived and worked in them.