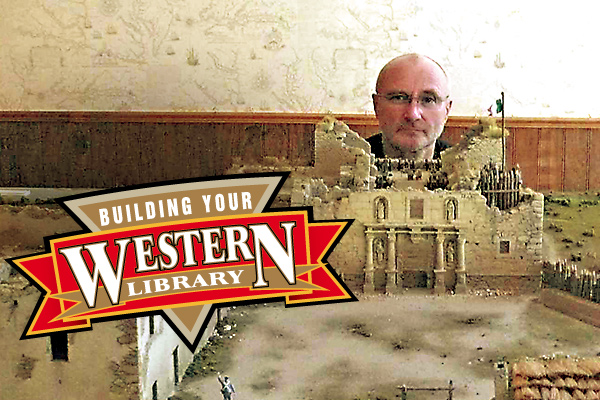 He’s sold more than 200 million records, and he’s a lieutenant of the Royal Victorian Order, but what we like most about Phil Collins is that he is a devotee to all things Alamo. His book, The Alamo and Beyond: A Collector’s Journey, was issued earlier this year.

“I have collected (and read) every Alamo book I’ve come across, so it’s very hard to highlight just five of them,” Collins tells True West. “Each book offers something the others don’t. I apologize if I’ve omitted some that are worthy of inclusion.”

1.Texian Iliad (Stephen L. Hardin; University of Texas Press): Pretty much one of the best books on the Texas revolution and the goings on at the Alamo. I was lucky to have Stephen accompany me on my book tour earlier this year, and he’s a great guy.

2.Exodus from the Alamo (Phillip Tho
mas Tucker; Casemate): I include this as it’s a real “revisionist” look at the events at the Alamo in 1836. It’s argumentative and throws doubt over much of the well heeled theories.

3.The Illustrated Alamo 1836 (Mark Lemon; State House Press): This was a remarkable achievement by Mark. A brilliant scale model, photographed and aided by blue Texas skies and desert effects. We have the model on display at the History Shop on E. Houston Street in San Antonio, and it never fails to wow the visitors. A great pictorial look at what the compound might have looked like in 1836.

4.The Alamo: An Illustrated History (George Nelson; Aldine Books): I discovered this book quite a few years back and was amazed at the information contained within. George is a great Alamo buff and archaeologist. His images of the area throughout the years are very useful and illuminating. I have had much pleasure in funding the reprinting of this book over the years. A “must have” for Alamo enthusiasts.

5. An Altar for Their Sons (Gary S. Zaboly; State House Press): Master Texas Illustrator Gary Zaboly has collected hundreds of original newspaper articles describing events leading to the Siege of the Alamo, and following it. Very interesting read and proof that the press were getting it wrong even back then! Gary has definite views on the form and construction of the compound in 1836 and is not shy in describing them.

Best known as the drummer and vocalist for the British rock group Genesis, Phil Collins is one of three recording artists who have sold more than 100 million albums worldwide as both a solo artist and a principal member of a band. The rock star also has an intellectual side to him; he has been a student of the Alamo and the Texas Revolution since boyhood. In his first book, The Alamo and Beyond: A Collector’s Journey (State House Press), he shares his story of the Alamo through artifacts and documents from his private collection. His first Alamo collectible was a receipt for a saddle purchased by John W. Smith. The San Antonio resident rode his mount out of the besieged Alamo to deliver what would be Lt. Col. William B. Travis’s last letter.