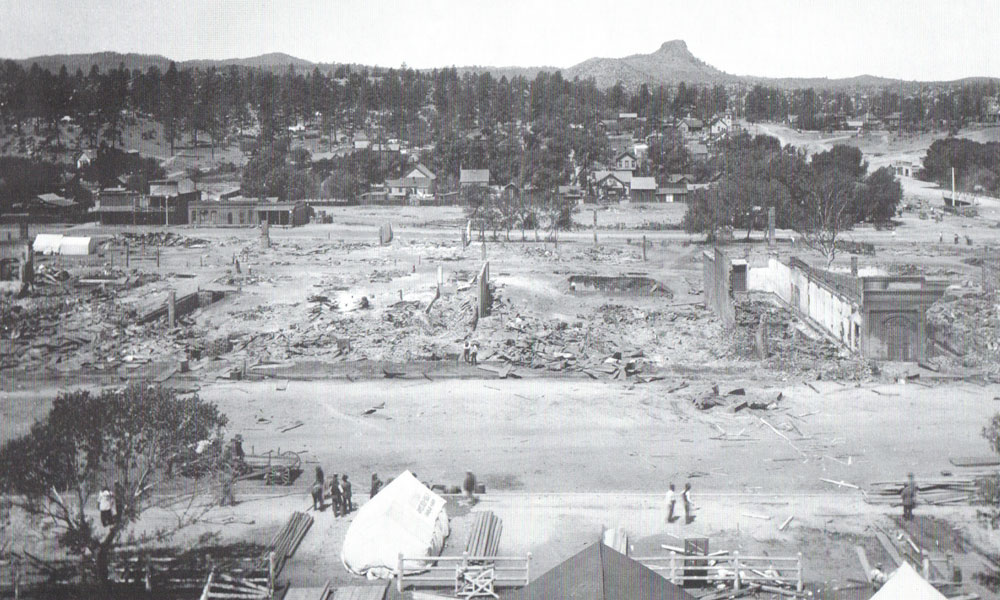 Fires were always a menace to frontier towns. The boomtowns of Prescott, Bisbee, Jerome, and Tombstone all burned to the ground at least once during their heyday. With all those coal oil lamps and candles it took only one careless mistake and it was katy-bar-the-door.

It was a warm, sultry evening in Prescott that 14th day of July in the year 1900. The saloons and gambling casinos along Whiskey Row were gearing up for a big Saturday night shindig. Gamblers were dealing cards; the bargirls were hustling drinks. The rinky-tink sounds of piano music emanated from each raucous saloon. Boisterous, devil-may-care cowboys, railroaders and miners were bellying up to the bar for a night of revelry.

Over at the Scopel Hotel on the corner of Goodwin and Montezuma Streets, a miner came in from his shift, jammed his pick candle into the wall and starting sprucing up for a night on the town. Anxious to get down to the saloons he forgot to blow out the candle. Sometime around 10:30 the candle set fire to the wooden structure and soon the entire hotel was engulfed in flames.

And those frontier folk never lost their sense of humor either. While Prescott burned, the bar was still open, and the piano player played. The most requested tune that evening was, “There’ll Be A Hot Time In The Old Town Tonight.”