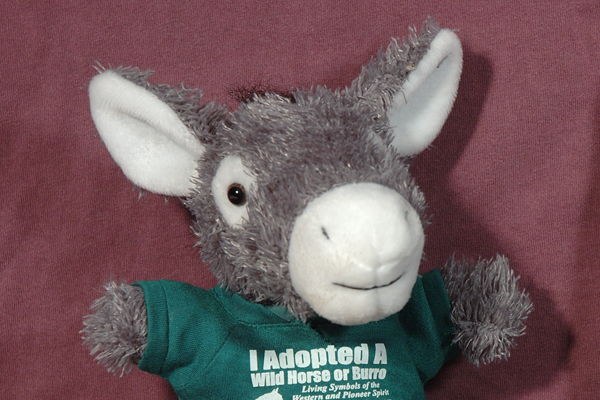 Ongoing: No one said it would be easy to round up wild horses and burros in the West. The Bureau of Land Management (BLM) found itself blasted for removing herds and for adoptions that ended up in slaughterhouses. BLM’s stated cause is to round up only the excess animals from areas where vegetation and water could become scarce if too many animals reside there. And BLM is working hard to improve its adoption track record, including rewarding qualified adopters who have adopted in the past by reducing the fee. One volunteer program that has advanced the most for adoption is a pilot project in California. Organizers learned a valuable lesson about utilizing volunteers as Adopter’s Assistants. This program provides resources for new adopters, such as how to move an untrained horse or burro from one pen to another, to where to find a qualified veterinary in the area. Since last year, about 170 volunteers have signed up for the pilot program. To volunteer or start a program in your state, contact the BLM office in California: 775-861-6614. Adoptions planned during December: Rock Springs, WY ( Dec. 8), Pauls Valley, OK (12) and Crowley, LA (16-17). Online adoptions posted at wildhorseandburro.blm.gov

Ongoing: “It’s impossible to preserve everything,” Paul Ganster told The Arizona Republic, but “we should want to preserve for future generations the opportunities we’ve had to enjoy those areas that remind us of our historical and cultural past.” Ganster was upset that U.S.-Mexico border traffic was threatening historic sites. The volunteer Arizona Site Steward program documented more than 50 acts of vandalism (such as removal of artifacts and defamation of petroglyphs) to the sites in 2005. Arizona is the model for the BLM’s site steward programs, as the 16-year-old program has made more than 7,500 visits to BLM sites. Other active site steward programs are found in California, southwest Colorado, northwest New Mexico, Nevada, Oregon and Utah. What do site stewards do? They are watchdogs for the sites, reporting the conditions to an archaeologist by recording changes over time in their field notes, drawings and photography, and they also assist in surveying and mapping. To join an existing program or start one in your state, visit blm.gov/heritage/adventures to contact BLM’s Adventures in the Past.

Hit: Preserve America presented a presidential award this year to the Tauck World Discovery Yellowstone Guest-Volunteer Program in Wyoming, Montana and Idaho. The world’s first national park hosts 3 million visitors annually, and this program has converted 5,000 vacationers into volunteers who have donated nearly 10,000 hours of labor to help preserve park assets. The program is a shining example of how historic sites can utilize the human visitation that usually destroys a site and turn it into a positive force that not only aids in preservation but also increases visitor understanding of the site.

Ongoing: The reconstructed 1865 military post along the Oregon, California, Mormon and Pony Express Trails in Casper, Wyoming, is undergoing a campaign for a museum expansion. Groundbreaking took place this fall, and fundraisers have already secured 87 percent of its $1.85 million goal as of July. Funds will go toward a new gallery that will tell the story of the region’s agriculture, oil and gas industry, and other areas of community development. This new gallery will allow the current gallery to be divided into two spaces, one of which will house exhibits on the site’s trail and frontier army history. Also being built are two education rooms to allow for public programming and school use, and a textile storage, which will allow the museum
the luxury of collecting artifacts, photographs and other archival materials to preserve for future generations. To send in your donation: 307-235-8462.

Hit: An Arizona research team, under the guidance of Dr. E. Charles Adams and A.J. Vonarx, rebuilt a pueblo and torched it last year. Why? Sometimes, the best way to understand the past is to re-enact the scenarios. The researchers were trying to understand why the 14th century Chevelon Ruin of the Homol’ovi village in northeastern Arizona was burned intentionally. You can watch the documentary that aired this year on the Archaeology Channel at archaeologychannel.org (search in the videos for “Hopi Fires”).

Ongoing: Bob and Sharon Schetter have helped excavate the Mortar Riddle Site, 60 miles southeast of Burns, Oregon, since work began in 2003. The site’s name is derived from the Riddle brothers, Ben, Walter and Fred, early 1900s settlers, and the 70-plus hopper mortars—bowl-shaped stones—that sit on the site (a high number for a site within that region). The site was a summer base camp while Northern Paiutes went on hunting trips to the top of Steen Mountain, says Scott Thomas, district archaeologist at the Burns office. Items retrieved so far include nearly 400 arrow and atlatl stone points, a mid-1800s U.S. military button, carved bone gaming pieces and even a brass buckle. Archaeologists believe the mortars were used to grind dried roots and meat, and seeds. Members of the Oregon Archaeological Society and the local archaeology club could use your help: 541-573-4400.