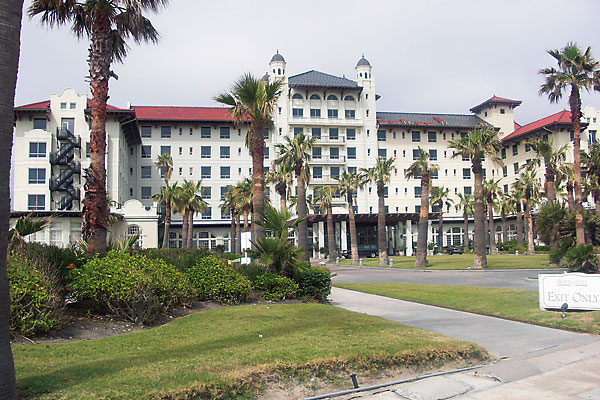 Hurricane Ike put a hurt on the Texas port city of Galveston in mid-September. Thirteen-foot floodwaters wreaked havoc with structures both old and new. Damage assessments are pretty murky, although some estimates put the figure at $8 billion.

Many efforts are underway to rehab the historic structures, which will likely take years. One example is the work by Mitchell Historic Properties, a company that owns more than 15 structures in town, including the Hotel Galvez.

The hotel has an ironic history—local business leaders raised a million dollars after the Great Storm of 1900 destroyed Galveston’s luxury beachfront hotels.  The Galvez opened in 1911 and was named after the city’s namesake. By 1918, the hotel hosted 40,000 guests; in the 1920s-40s, visitors included presidents Franklin Roosevelt, Eisenhower and Johnson, and celebrities Frank Sinatra and Jimmy Stewart. The Galvez was placed on the National Register in 1980.

Ike put a damper on things, tearing clay tiles from the roof and pushing water throughout the hotel’s lower level.  In all, Mitchell-owned buildings suffered an estimated $30 million in damages.