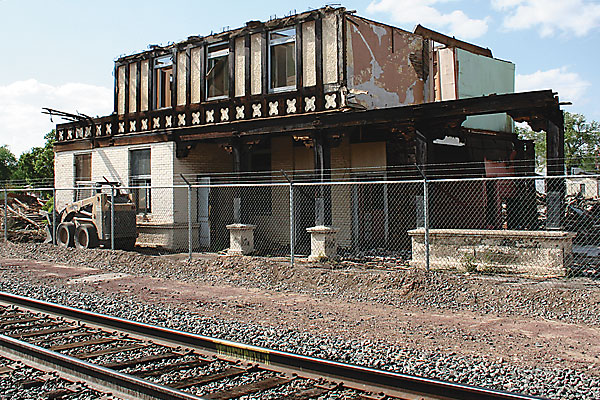 In January, we wrote about ongoing efforts to save the historic Havasu Harvey House in Seligman, Arizona.

Today, the circa 1905 building is gone, demolished by its owner, the Burlington Northern and Santa Fe Railroad.

For years, the BNSF has wanted to tear down the empty hotel, which closed in the mid-1950s. Local group Friends of Havasu looked for ways to buy it. The railroad offered to donate it to anybody who would move it. Nothing came of the offer, and the Havasu came down in May 2008.

The salvaged historic items were given to Seligman Historical Society.

Our thanks to Dan Lutzick for the info and picture. Dan is project supervisor for the renovation of the El Garces Harvey Hotel in Needles, California. The $10-million effort includes a restaurant, visitors center, museum and hotel. He hopes to have it finished by the end of this year, just in time to celebrate the building’s 100th anniversary.

Mention Fort Stanton, New Mexico, to an Old West buff, and he’ll likely talk about Billy the Kid and the Lincoln County War. But the 1855 facility has seen a lot of history besides that—the Indian Wars, the nation’s first tuberculosis hospital and an interment camp for German sailors in WWII. Kit Carson stayed there. General “Black Jack” Pershing was stationed there twice. Hundreds of Buffalo Soldiers were based there.

To help preserve the fort’s history, New Mexico Gov. Bill Richardson announced in May 2008 a plan to renovate buildings at the state monument.

Buildings to renovate include:?the administration building, which will house a museum and offices; the commandant’s quarters (the Pershing Quarters) and the old officers quarters on the main quadrangle; and the stone stables.

Total price tag: $1.76 million, coming from the legislature and foundations. Project bids are already out.

Depot on the Move

It’s strange to say that a railroad depot is on the move. But that’s the case in Boulder, Colorado.

The 1890 Union Pacific facility—appropriately made of stone—has been in that position before. In 1973, the Boulder Jaycees bought the building and moved it to an undeveloped area, using it as its headquarters. The area has grown up, and the depot is now surrounded by shopping centers. Nobody wants it there. So the Jaycees have sold it to the city for $10, and the owners of the commercial center have put up $135,000 of the estimated $670,000 needed for relocation.

By the time you read this, the depot should be in storage, awaiting its final move to a permanent location. Just when and where that will take place is in question. But city officials say the project is on the right track.

The wrecking ball took down a historic bank building in Great Falls, Montana, in April 2008.

The 1900 Conrad Bank Building served as a financial institution for decades. A local family bought the place 15 years ago and converted it into a store. Then a 2006 fire severely damaged the structure. City officials and insurance companies pressured the owners to do something with the building, deemed a public safety hazard.  Attempts to sell it, or even give it away, were unsuccessful.

“I think that it should have been preserved,” says City Historic Preservation Officer Ellen Sievert. “It would have been a really good project as part of preserving downtown history.”

Take note historic home owners, of this unique renovation of the Samuel May Williams House in Galveston, Texas.

Each of the 12 rooms in the 1839 house—the second oldest in Galveston—has been redesigned by members of the Gulf Coast chapter of the American Society of Interior Designers. In May, the results were shown to the public as part of the group’s annual interior design tour.

The designers had few rules: they had to respect the history of the structure yet make it livable for a modern family, and they used a common color scheme of warm pinks, greens and creams.

The design idea came from the Galveston Historical Foundation, which has owned and operated the house since 1954, when the place was nearly demolished. The GHF ran it as a house museum. But the building was off the beaten path, in a residential neighborhood, so few folks found it—and the foundation lost money. Seeking creative approaches for the home’s future, the GHF decided on a redesign.

Now the GHF is looking for a permanent resident and caretaker for the Williams House.