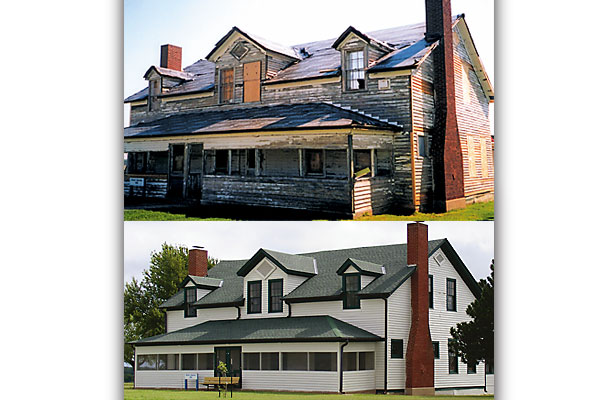 A modern renaissance continues at the Indian Wars-era Fort Reno in central Oklahoma—thanks to a dedicated group of volunteers.

The 55 members of Historic Fort Reno, a nonprofit formed in 2000, work closely with the U.S. Department of Agriculture (USDA). Some 25 historic buildings need saving, and the bill, estimated at $15 million in the 1990s, is probably much higher now.

Bob Warren—who wears many hats as the secretary-treasurer of the nonprofit, director of the visitors center and a re-enactor—says the group received a nearly $600,000 grant from the U.S. Parks Service in 2004. Last year, it received $255,000 from the state centennial commission.

With that funding, three building exteriors have been restored and, in 2005, the USDA renovated a 19th-century home on officers’ row, converting it into the visitors center.

Next up on the to-do list: a 1944 chapel built by German POWs. After that, Warren says an 1878 one-room schoolhouse will be restored to its original form.

In 1881, four men walked Tombstone, Arizona’s Fremont Street, to confront a group of Cowboys in an empty  lot behind the O.K. Corral.

The street is now a major highway, but efforts are underway to return Fremont to what it was (as much as possible).

The state of Arizona has allocated some $963,000 to place sidewalks, boardwalks, porches and canopies where they used to be in a stretch between Third Street and Sixth Street. Trees will also be planted, and Fremont may be narrowed.

The first step—a project assessment, which kicked off in early August—should be finished in a year.

Even the ghosts of the Cowboys might approve of this return to yesterday.

A PLUM OF A DEAL?

The largest private landowner in Montana is a lumber company, Plum Creek Timber, claiming 1.2 million acres in the mountains out west.

But the company is getting out of the lumber business—and getting into real estate. Many are concerned unspoiled areas will be bulldozed to make way for “McMansions,” huge homes frequently owned by out-of-staters.

The U.S. Forest Service agreed to allow the company to pave the dirt roads used by lumber trucks, without an environmental assessment, and thus, no public hearing.

Environmental groups are livid. So are local governments; Missoula County has threatened to sue the feds over the lack of public input. Forest Service overseer Mark Rey—a former timber lobbyist—says the law required him to work with Plum Creek, adding that the company has agreed to undertake projects that limit the danger from wildfires.

The Nature Conservancy and the Trust for Public Land will pay $510 million over the next two years in exchange for 320,000 acres in western Montana. About half the amount will come from private donations; the feds will come up with the other half, using a new tax credit bond system.

On the surface, it seems like a reasonable project—Billings County, North Dakota, officials plan to build a major road along a secluded trail in the Badlands.

The problem is that the road will run near Theodore Roosevelt’s Elkhorn Ranch, where the future president gained a better understanding of the West and conservation in the 1880s. Much of the ranch is owned by the National Parks Service. Opponents believe that traffic and construction will ruin the area.

A public comment period ended in early August—opinion ran about 50-50 among the 800 residents of Billings County. An environmental impact study should be completed by next spring. A final decision is expected by 2010.