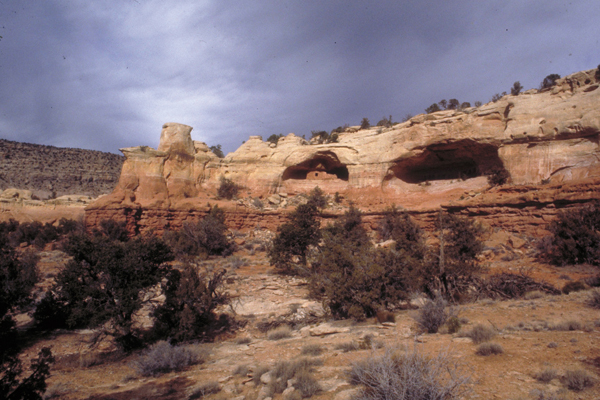 The partnership means Arcadia will triple its publication of Arizona titles for its “Images of America” series by April 2007. The AHF, based at Arizona State University in Tempe, will provide material from its archives. So far, Arcadia’s published Arizona titles have covered Apache Junction and the Superstition Mountains, Bisbee, Fort Huachuca, the Grand Canyon, Sierra Vista, Tombstone and Tucson.

MISS: Spray painting of prehistoric rock art panels in Colorado’s McInnis Canyons National Conservation area and looters excavating more than 47 plots of an Ancestral Puebloan settlement in Colorado’s Canyons of the Ancients National Monument are among recent acts of vandalism on land owned by the Bureau of Land Management (BLM). “Vandalism and pot hunting on public lands are burglaries committed against American history and thefts from the American people,” says Karl Kumli, a board member of Colorado’s Crow Canyon Archaeological Center. “We have to get out the word that this is our shared heritage that is being damaged.” A National Landscape Conservation System Caucus was formed July 11 to promote stronger protections for these sites; the lack is blamed on shortcomings in BLM funding and its ability to establish on-the-ground protection (as BLM lands increase its recreational use), according to a report from the National Trust for Historic Preservation.

HIT: Since the 1960s, archaeologists have been chipping away at a 150-foot rock underhang, the Horn Shelter, located on private property on the western bank of the Brazos River near the Lake Whitney Dam. The site is one of three in the U.S. to include Paleo-American remains (man prior to Indians). What gives the site even more prominence are the burial goods (shells, antlers, flint knives) accompanying the remains. On October 12, the Bosque Memorial Museum  in Clifton, Texas, will be unveiling its exhibit on the Horn Shelter, which includes reproductions of the remains of an adult male and child who have been carbon dated at 9,500 years old. For more information: bosquemuseum.org • 254-675-3845.

ONGOING: Russ and Patsy Fraser are hoping someone will save Old Trail Town in Cody, Wyoming. The developers of Old Trail Town, Bob and Terry Edgar, needed some help sustaining the town so they sold Terry’s half to the Frasers. Unfortunately, Russ has been in poor health, and the Frasers are being pushed to sell by the bank. They would prefer a nonprofit group buy Old Trail Town so it remains open to the public. One group interested in buying it is the Museum of the Old West, a nonprofit managed by Bob Edgar and Frances Beldon, which currently houses artifacts from the historic Pitchfork Ranch. The museum needs help to make such a purchase. Parties interested in buying the town outright or helping the museum purchase it should contact the Frasers at 307-527-6276. Old Trail Town has a collection of authentic buildings from northwest Wyoming, including the cabin from the Hole-in-the-Wall Gang and a saloon frequented by Butch Cassidy. Liver Eating Johnson is buried there.

HIT: In the Sierra Vista Ranger District, at the base of Brown Canyon and adjacent to Fort Huachuca, you’ll find the century-old Brown Canyon Ranch, with its ranch house, storeroom, corrals and a pond that is home to an endangered frog species. The ranch is named for John Thomas Brown, an 1880s farmer, rancher and operator of the Mountain View Hotel in Turnerville, near the entrance to Ramsey Canyon. The centennial celebration takes place November 4, and if you plan to attend, be sure to thank the volunteers, students, Forest Service members and Friends of Brown Canyon Ranch who donate their time to restore the ranch. If you’re interested in helping out, please write to Friends of the Brown Canyon Ranch c/o John Kugler, PO Box 142, Sonoita, AZ 85637. Perfect road trip music: “This Old House” by Sarah Barchas, about the ranch’s adobe house (highhavenmusic.com). A portion of the proceeds from the sale of this single goes toward restoring the ranch.

ONGOING: Furniture created centuries ago and taken along at the time of migration reveal their importance to a culture. For instance, the intricate construction of a dowry chest from the 1800s establishes it as central to the culture. But when immigrant Russian and Polish Mennonites settled in Kansas during the 1870s, they eventually replaced such chests with land that could help generate resources to furnish the house. These chests, as well as clocks, cradles and wardrobes ranging from pre-1790-1910, will be on permanent exhibit at the Kauffman Museum in North Newton, Kansas. The exhibit is one of seven Save America’s Treasures projects in Kansas. For more information: www.bethelks.edu/kauffman • 316-283-1612.