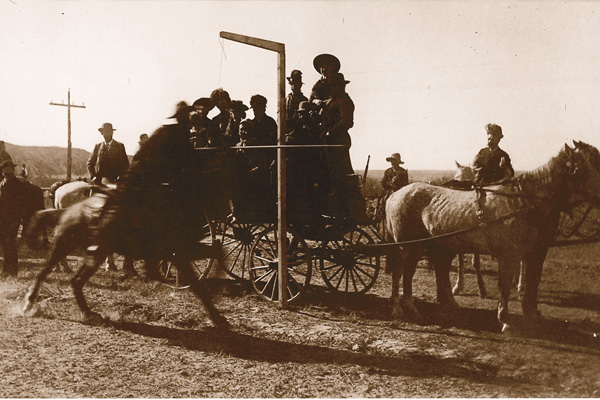 When I was a kid picking cotton in Texas, certain drugstore cowboys sang a song that went:

When it’s roundup time in Texas,

And the bloom is on the sage,

In the early morn,

And forget to act your age!

Well, anyone with half a holster knows I don’t have the words right, but the spirit is there—which sort of explains why I’m sitting in crowded bleachers at the Wichita Country Mounted Patrol Arena on an August evening waiting for the Texas Ranch Roundup to begin.

Rodeo cowboys are professional athletes, whereas the Texas Ranch Roundup, which each year sees attendees from some of the biggest ranches in Texas, features only the work that is actually performed by cowboys on the range. The shindig is for charity, but has been sponsored for the last few years by Bud Light. It’s an annual event in Wichita Falls.

“When’re they a-gettin’ this show on the road?” asked a graying, distinguished man next to me. Gratified as I was to be mistaken for a Westerner who knew such things, the answer to his question came from elsewhere as two cowboys suddenly thundered down the arena to rope a rangy cow with wicked-looking horns. The event—team branding, done here with a paint brush but on the range with a hot iron.

A thunder of hooves, and a cowboy—rope twirling like a rotor—has nailed another cow.

“What is this event?” asked my graying seat mate. I noticed that his clothes and hat looked expensive. No doubt he was a dude. I said, “Oh, just some wild cow milkin’.”

I was careful to leave off the “g.” This fellow didn’t have to know I was from Missouri.

“Is this really practiced on the range?”

Ah. Heaven had given me a chance to be a cowboy, or at least be taken for one. I tugged at the beat-up Stetson I’d bought earlier in a Salvation Army Store, and explained.

“Own th’ range,” I said (recalling the Texas language from my boyhood in cotton fields), “real cowboys drank lotsa cawffee. If a cowboy desires cream for that cawffee, he has t’git it from th’ source.”

I could see his eyes widen with respect.

My companion had obtained, perhaps through barter, a rumpled program. “It says here that saddle bronc riding is next,” he said. “Know anything about that?”

No, I didn’t, but with such a willing, even eager, listener I could care less. The Lord’s bounty had overflowed. This greenhorn was too good to be true. I leaned toward him.

“Just between you and me,” I said in a low voice, “they only call it that for the benefit of non-cowboys.” I gave my Stetson a tug.  “What they’re really doing is testing saddles. You watch when that rider comes out on that bronc . . . there! See? Lookit him hang onto that saddle horn! He does that a lot, with every part of the saddle, so you can imagine what a testing it gets.”

“My, you really know your stuff,” the dude said admiringly.

I confess that the fellow’s gullibility had begun to make me feel a trifle guilty, but only a trifle. As long as he asked questions, I could supply answers. Of course, being from Missouri equipped me to follow the famous dictum of, I think, Mark Twain, who said, “Never relate the facts when you can exaggerate.”

I saw no point in saying I had beaten Tibbs at checkers, out behind a chute, while gathering information for a rodeo story for my college newspaper.

“Oh, you did,” he said with a big smile. “Why, I never heard of half that stuff you told me! Reckon I’ve led a sheltered life.”

And he named one of the biggest ranches in Texas.

Poet and writer William Childress was born in Oklahoma, worships the late Woody Guthrie, plays guitar and banjo, throws tomahawks, served in the Korean War, is an ex-paratrooper with three honorable discharges, and has two Pulitzer Prize nominations. He still has the scars where a sorrel threw him into a bob-wire fence.