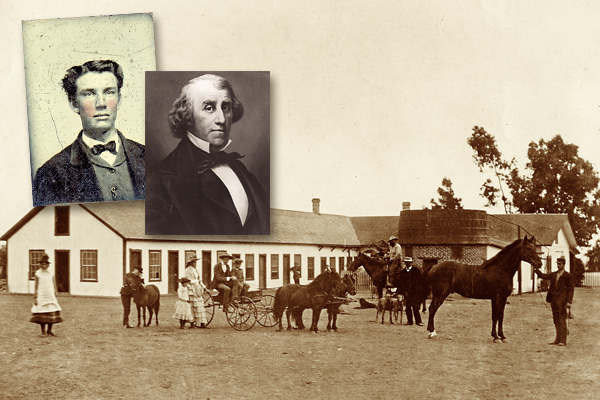 The first time Pamela Seager visited the run-down Rancho los Alamitos, she noticed its potential. “There was an integrity,” she says. “It wasn’t tricked up. It had all the good bone structure, but it needed to be polished.”

She and her team have spent more than a quarter century polishing this gem that spans 1,500 years of California history.

Once a trading village of the Gabrielino-Tongva people and then a part of California’s largest Spanish land grant, the site was donated to Long Beach, where it served as a traditional museum for 15 years.

Seager and her board of trustees, however, weren’t interested in a museum with ropes across doorways and artifacts in glass cases. They wanted to bring this working ranch back to life.

She studied the site, which includes a circa 1800 adobe-core ranch house, five early 20th-century ranch barns and four acres of historic gardens.

This past June, she celebrated the grand opening of the historic barns and gardens, plus a new Rancho Center, which was filled with animals traditional to the ranch.

“A family member came through recently and said, ‘It finally looks like grandfather’s ranch,’” says Seager, with obvious pride in her voice.

Grandfather’s ranch was the ranch of oilman and agribusiness leader Fred Bixby and wife Florence who gave it to Long Beach in 1968. They had inherited the 7.5-acre ranch from his parents, John and Susan Bixby, who bought it in 1881. Before them, the owners had been Los Angeles civic leader Abel Stearns, former California Gov. Jose Figueroa and an heir of Jose Manuel Perez Nieto, the original owner of the 300,000-acre land grant issued in 1790. The land grant Nieto had received from the Spanish Crown included the village of Povuu’ngna, which is traditionally believed to be the birthplace of the native people of the Los Angeles basin, now commonly called Rancho los Alamitos.

“The owners of the rancho are the who’s who of California,” says Claudia Jurmain, special projects and publications director who utilized the site’s extensive historical documents and photographs.

The laborers who worked there came from the region and also from around the world; they included Californian Indians, Belgian tenant farmers, Chinese and European immigrants, Mexican ranch workers and Japanese lease farmers.

Jurmain is one of the authors of the 2011 book Rancho los Alamitos: Ever Changing, Always the Same, and she, in collaboration with William S. Wells, developed the concept for the June exhibition in the Rancho Center. Its History Room and video feature the ranch’s archives of ledgers, letters and oral histories. “We used letters and diaries and journals of the family and the workers, so the stories are told in their words,” Jurmain says.

Seager won’t take credit for the gem she’s guided: “This really is a cooperative effort of the family and volunteers and the board and staff. One person could never do it; it takes a team.”

Rancho los Alamitos is lucky to have this Old West Savior, Pamela Seager, leading that team.