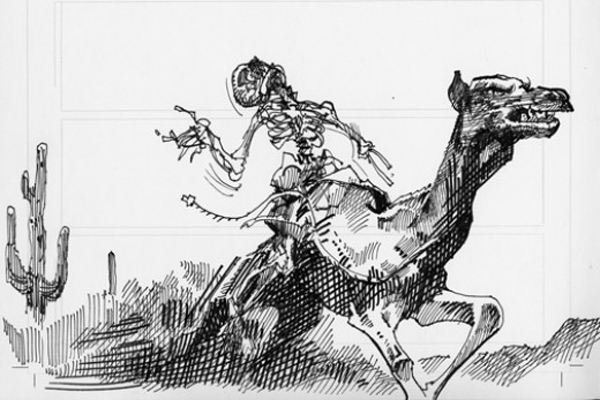 Just prior to the outbreak of the Civil War the storied Army Corps of Topographical Engineers used camels as beasts of burden during their survey of a wagon road along the 35th Parallel from Albuquerque to Los Angeles. The camel experiment was highly successful but following the survey the government had no more use for the homely critters and sold some at auction while others were left to roam the deserts of western Arizona. And, therein spawned legends such as that of the “Red Ghost.”

The legend began in 1883 at a lonely ranch at Eagle Creek near the Arizona-New Mexico border when a woman was stomped to death by a strange-looking red-haired beast with a devilish-looking creature strapped on his back.

Then one night a few days later a party of prospectors was awakened to thundering hoofs and terrifying screams stampeding through their camp. Strands of red hair were found clinging to the brush. The Red Ghost attacked again a few days later, this time the monster, described as being 30-tall knocked over two freight wagons. Again, strands of red hair were found in the wreckage. These acts of terror spurred a litany of embellished campfire tales. One claimed he saw it kill a grizzly and eat it. Another said he chased the Red Ghost only to have it disappear before his eyes. All agreed the camel had a human skeleton attached to its back.

Near Phoenix a cowboy came upon the Red Ghost and tossed a loop around its neck only to see the angry beast charge and run right over horse and rider before galloping off in a cloud of dust. The cowboy recognized skeletal remains of a man on its back.

Stories grew to legendary proportions until about a decade later a rancher awoke one morning and saw the Red Ghost grazing in his garden. He drew a bead with his trusty Winchester and dropped the camel with one shot. An examination of the corpse convinced all this was indeed the fabled Red Ghost. The animal’s back was badly scarred from rawhide strands that had been used to hold a body of a man. But how the human body came to be attached to the back of a camel remains a cruel mystery.