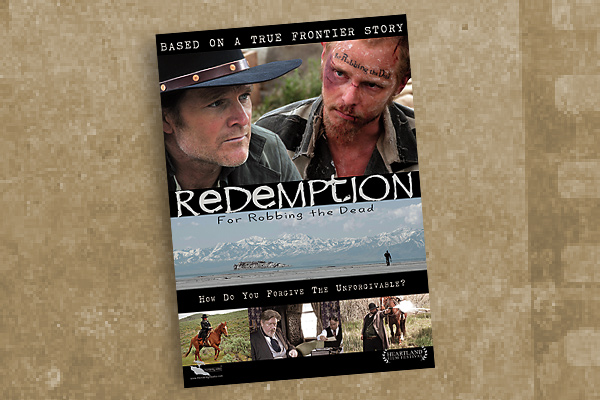 In the winter of 1862, robber Moroni Clawson tried to escape capture and ended up shot dead by a Salt Lake police officer.  When Clawson’s grave was moved to a different plot, folks discovered his corpse was naked.

Jean Baptiste, one of the first gravediggers of the Salt Lake City Cemetery, had stolen, cleaned and sold, or worn, the clothes of at least 300 cadavers—men, women and children alike. The locals convicted him and reportedly gave him a head tattoo that read, “Branded for Robbing the Dead.”

Based on this true story, this film
is really the tale of lawman Henry Heath and his wife, whose young daughter dies in the beginning. Despite his anger and revulsion, Heath brings his prisoner food and water, and looks after Baptiste’s wife, Marlys, who is three wheels short of a buckboard.

Heath is played by PRCA cowboy John Freeman, who would have done a fine job playing Walt Longmire, the grief-stricken sheriff of fictional Absaroka County. But the real scene stealer of the picture is Margot Kidder (the original Lois Lane), as Marlys. Kidder is incredibly brave, playing a much older frontier woman who wanders in and out of lucidity. By the end of the film, Marlys brings the story into focus emotionally for the other characters.

If director Tom Russell continues to make movies as intelligent and thoughtful as Redemption: For Robbing the Dead, I’ll make a special effort to see all of them.