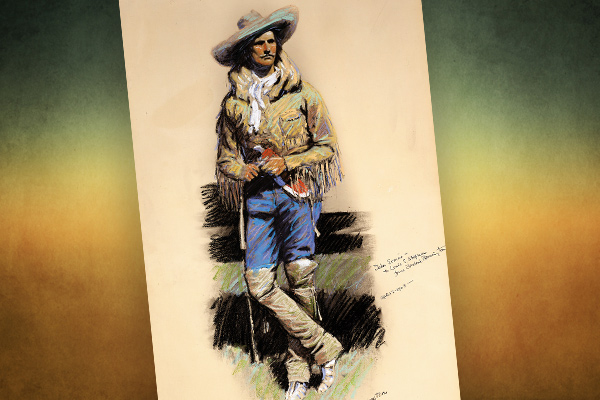 Not many collectors know that Frederic Remington was a novelist. Because he earned his living as an artist, he had the luxury of portraying the West more truthfully in prose than his contemporaries who tended to romanticize it.

The work that best epitomizes this is his novel John Ermine of the Yellowstone, which is a parody of other frontier tales, such as James Fenimore Cooper’s The Last of the Mohicans and Bret Harte’s short story “The Luck of Roaring Camp.” A painting of Remington’s lead character sold as the top Western art lot at the Jackson Hole Art Auction in Wyoming on September 15, 2012.

Wyoming served as a perfect backdrop for the sale of this painting because the book was set in its environs. Published in 1902, the novel recalls another rather famous one, also set in Wyoming, also a love story. Can you think of the title?

Yes, it’s that novel—the one that many acknowledge as the first true Western may not ring so true after you read Remington’s story. In Owen Wister’s The Virginian, his hero resolves his conflict between the wild West and the so-called civilized East, marries his heroine and lives out his life as a wealthy rancher.

Remington’s Ermine, though, sees Wyoming through different eyes. The white scout, who had been raised by Crow Indians, finds himself caught between the two cultures of East versus West. The lady he loves rejects him. And his tale of decline ends with a shot through the heart.

Remington made less money than Wister did on his writings. Then again, the artist’s aim was not to contrive stories that allowed him to expand on them in later works. He could create a West as he knew it to be, since his bread and butter lay in the visual representations he made of the frontier.

John Ford’s brother, Francis, would go on to direct a feature film in which he starred as John Ermine. Interestingly, one of Remington’s own models would appear in that 1917 silent film. His name was John Dark Cloud. When his medicine man character gave his blessing of Ermine’s adoption into the tribe, Ermine’s foster father left him with these immortal words, as Remington recorded them: “I have no ponies for you to herd, but I have many mysteries here,” tapping the boy’s forehead with his finger, “for you to gather up and feed on, and they are greater than ponies.”