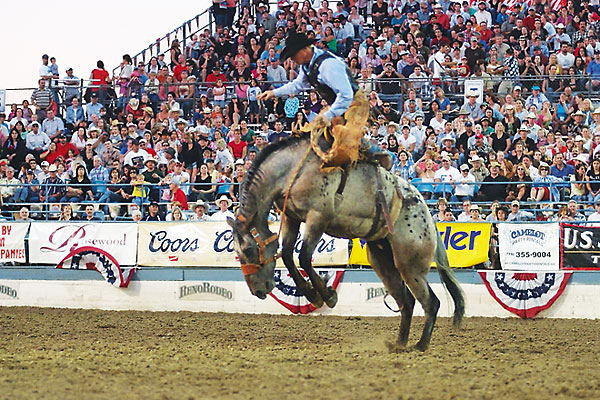 When Mella Rothwell Harmon wrote her thesis for the University of Nevada in Reno in 1998, she tackled Reno’s divorce trade at dude ranches during the Great Depression. “Nevada’s 20th-century cowboys got to wrangle women instead of cows,” she jokes.

Yet long before these divorce seekers came to Reno (current population 217,091), the city attracted emigrants traveling the California and Pony Express Trails. In fact, the Donner Party lingered too long in the Truckee Meadows of present-day Reno and got trapped by snow in the Sierra Nevada Mountains during the winter of 1846-47.

The townsfolk pay tribute to the Old West every year at the Reno Rodeo, celebrating 90 years this June 17-26. Harmon tells us folks here are especially excited about the Nevada State Fair, held at the Reno Livestock center this August 25-29. This year, Gov. Jim Gibbons declared that “in honor of our glorious past,” the state fair will now be known as the Nevada Territory Wild West Fair.

Locals best experience Reno’s brand of the Old West at these colorful spots.

Popular Local Hangout: Whitewater Park, where you can kayak in the beautiful Truckee River.

Local Film Screenings: Monthly documentaries are shown from the “Exploring Nevada” series at the Nevada Historical Society Museum
in Reno.

Good Cowboy Bar: We usually venture to nearby Virginia City to pass our time at the Bucket of Blood Saloon.

What historic site do most of the schoolchildren visit? The 1877 Lake Mansion, home of W.J. Marsh and sold two years later to Myron Lake, who is often considered the founder of Reno.

Best Time of Year: Fall. We have the bluest skies, the sunniest days and the most beautiful aspen trees, which turn color in the fall.

Who knows Reno’s history best? Neal Cobb knows just about every building in town. Back in 2008, he worked with Jerry Fenwick on an oral history program for the University of Nevada and on a coffeetable book, both titled Reno Now and Then.

Best-Kept Secret: If you drive east on Highway 50 (the Loneliest Highway) you will pass through small towns and ranches that exemplify Nevada’s Old West past. The highway parallels the 1860-61 route of the Pony Express. From this road you can get a feel of Nevada’s basin-and-range topography, and its wide-open spaces.