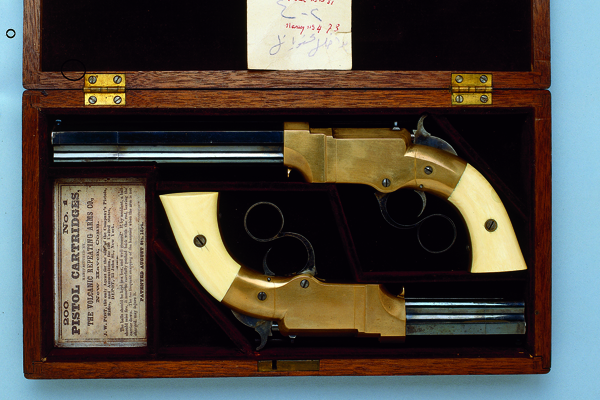 A pair of Volcanic pistols from the collection of King Farouk of Egypt rightfully sets a new record at Greg Martin Auctions’ November 15-17, 2004, sale in San Francisco, California.

The only known cased pair of No. 1 Pocket Model Volcanic breech-loading repeating pistols by New Haven Arms Co. hammered in at $110,000. “I don’t know of any Volcanic pistols that have sold for over $40,000,” Greg Martin says.

Volcanic pistols owe their creation to Horace Smith and Daniel B. Wesson, who started the Volcanic Repeating Arms Co.
in 1854.

Smith and Wesson produced the first magazine fed, lever action pistol, nicknamed the Volcanic due to its caseless “rocket ball” ammunition. The duo eventually left Volcanic to start up another gun manufacturing company with a revolver and cartridge combo. When Volcanic’s offices moved to New Haven, Connecticut, in 1856, the company’s name was changed to New Haven Arms Co. Four years later, B. Tyler Henry redesigned the Volcanic rifle to use a large caliber rimfire metallic cartridge, giving birth to the Henry rifle. In 1866, stockholder Oliver Winchester bought control of the company, which then became the Winchester Repeating Arms Co. The company’s first model, the 1866 Winchester (also known as the Yellowboy), was basically a Henry rifle with two improvements: a wooden forestock and a side loading gate.

The guns shown herein are a visual time line of the Volcanic repeating pistol’s evolution to the Winchester sporting rifle. Also included is one of the guns manufactured by the company that Smith and Wesson built after their foray in Volcanic Arms. The total bids for the auction exceeded $4 million.