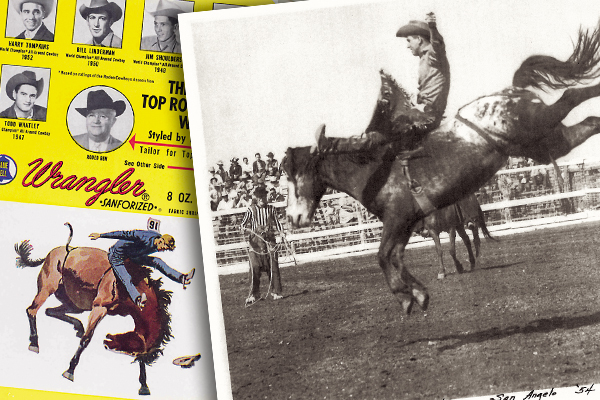 Western wear as a separate apparel category got its start in the 1940s after WWII ended. Rockmount Ranch Wear, Westmoor (Panhandle Slim), Miller and Karman (Roper) initially catered to ranchers, farmers, cowboys and tourists living in or visiting the American West.

In 1947, Blue Bell, a North Carolina manufacturer of denim dungarees and overalls, hired Philadelphia tailor “Rodeo Ben” Lichtenstein to design denim pants for cowboys. Rodeo Ben already had a steady clientele of cowboys on the rodeo circuit. They came to him for flashy yet comfortable clothes to wear while they roped calves, wrestled steers and bucked bulls and horses in front of enthusiastic crowds of city slickers at New York City’s Madison Square Garden and other sports arenas along the Atlantic seaboard.

Blue Bell commissioned Rodeo Ben to work directly with famous rodeo cowboys like Jim Shoulders, Freckles Brown and Todd Whatley to develop trousers that would stand up to the rigors and needs of a man who spent a lot of time in and out of a saddle. The company also had a brand name for the new pants: Wrangler.

Rodeo Ben’s denim trousers were an early example of technical sportswear. Among his innovations was slimmer, proportioned fit with a longer rise that gave the cowboy more room to bend and twist at and above the pelvis. The rise also allowed the back pockets to be raised so the cowboy didn’t sit on his wallet while in the saddle. The rivets on the pockets and seams were smoothed so they wouldn’t catch on or scratch the saddle leather.  His signature watch pocket was located just below the waistband at the top of the right front pocket—a design that became a fashion trend.

He lengthened the belt loops for the wider, heavier belts cowboys preferred, and he widened the space between the front loops to allow room for big trophy buckles. He designed a slim and fitted silhouette that was flattering to the body. Below the knee, the pant legs flared enough for cowboys who preferred to wear their pant legs bunched or “stacked” over their boot tops so the hems wouldn’t ride up and expose the shafts of the boots.

Perhaps his most radical feature was installing a zippered front closure. The metal zipper eliminated the gaps between buttons that might catch on a saddle horn.

His original pants were labeled 11MWZ, production shorthand for 11-ounce denim, Men’s Western Zipper. That look was dubbed “Cowboy Cut,” a trademark now known worldwide. The 11MWZ was replaced by 13MWZ when the weight of the denim increased to 14¾ ounces in 1951. Style numbers changed as more silhouettes and fits became available. Wrangler’s new Cowboy Cut jeans are labeled 47MWZ in a nod to the year Blue Bell launched the Wrangler pants Rodeo Ben designed.

Rodeo Ben’s style of jeans was an immediate hit with rodeo and working cowboys, and it inspired other brands to experiment with new designs in denim. These days, brands craft their popular relaxed-fit Western jeans for a market wider than the working and rodeo cowboys who originally inspired the style.