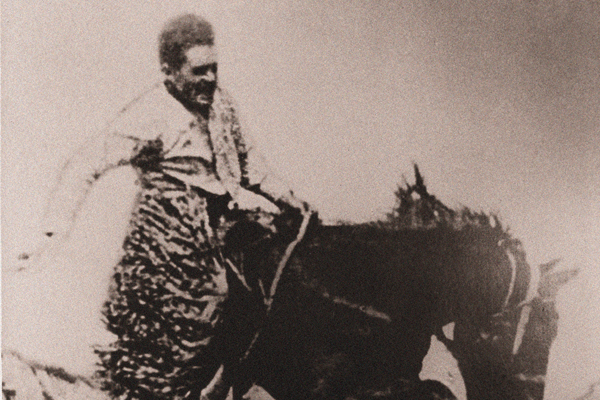 Offspring of a Percheron stud and a Mexican hot-blood mare, the big black colt born on the Frank Foss ranch of Southeastern Wyoming may have lacked in looks, but he made up for it in stamina.

He was three in 1899, when the Swan Land and Cattle Company bought the unbroken stallion. Swan cowboys on the Two Bar Ranch threw him to castrate and in the process bumped his head, breaking a bone in his nose, which was cut out by Two Bar Foreman Sam Moore. The accident and “surgery” left the young horse with a distinctive whistle to his breathing, par-ticularly when he was agitated. Soon, the cowboys began calling him Steamboat.

Jimmie Danks was the Two Bar’s top hand, and he later told of his first ride on Steamboat: “Why I bitted him several times in the corral and rode him about four times in the corral. He was kind of stubborn and I would get right on to him and he would just stand there and when you screwed him a little bit with the spurs he would go to; he would buck and when he bucked he bucked hard. And so I decided I would take him out there one day. When he came out of the corral he looked that way and this way. He blowed up at me and we had one of the damnedest saddle fights you ever saw.”

It’s possible Danks and the other cowboys on the Two Bar could have turned Steamboat into a cow horse, but his owners recognized a bucking horse when they saw one. By 1901, John Coble had purchased Steamboat and placed him in the arena at Cheyenne Frontier Days, which had started the year after the horse’s birth. Coble owned a string of bucking horses and was the staunchest supporter Tom Horn had after he allegedly shot Willie Nickell that same summer. Horn had worked on the Two Bar, knew most of the cowboys and, because he was friends with Coble, no doubt knew of Steamboat. But the gunman is never known to have climbed aboard the horse, although their stories are intertwined.

Once in the rodeo arena at the Festival of Mountain and Plain in Denver or the one at Cheyenne Frontier Days, Steamboat routinely dumped cowboys into the dirt, including two-time Mountain and Plain champion Thad Sowder, Wild West Show champion Frank Irwin, trick roper and rider Pecos Craver and Otto Plaga, the man who could have provided Tom Horn with an alibi to the Nickell murder had Horn not been so arrogant about his own riding abilities. Few of the men who climbed on Steamboat rode him successfully—and in those days, a cowboy had to remain on until the horse stopped bucking and not for a mere eight seconds—but there were some who did.

Jimmie Danks almost certainly kept his seat on the black horse out on the Two Bar Ranch before Steamboat entered the rodeo arena, and his brother Clayton also topped him at Cheyenne Frontier Days. “Only once when Steamboat gave an extra sharp twisting buck at the rails, did he appear in any danger of coming off, but he righted himself quickly,” a Cheyenne newspaper reported on the 1903 ride by Clayton Danks.

Also in 1903, Iron Mountain cowboy Guy Holt stuck to Steamboat for a ride in Laramie that immortalized both horse and rider when University of Wyoming professor B.C. Buffum took a photograph of their contest. That picture was later used to design the University of Wyoming’s cowboy logo, and it may have been used for reference when the bucking horse design for the Wyoming license plate was developed.

Some who saw the contest between Steamboat and Dick Stanley at Cheyenne Frontier Days in 1908 said it was not a fair draw. A downpour had drenched the field that day so with every jump Steamboat sank to his hocks in mud, and Stanley stayed aboard until the black quit bucking. (Stanley was most likely an alias for Earl Shobe, who had once robbed the Buffalo, Wyoming, post office with Jim McCloud before escaping to California.)

After his days in Coble’s bucking string, Steamboat was purchased by Charles B. Irwin, who would build a Wild West show with the black bucking horse as one of the stars. In 1914, Steamboat was badly cut on barbed wire in Salt Lake City while traveling with the Irwin Brothers Wild West Show. He was returned to Wyoming, but blood poisoning set in. The Cheyenne Daily Leader described his death this way: “A bullet fired from the rifle of the notorious Tom Horn into the skull of the animal further relieved suffering and brot [sic] to a sad end one of the most notable careers ever enjoyed by a horse.”

Though Steamboat is dead, his legacy continues. He is still featured on the University of Wyoming’s logo, and Fanning a Twister, a heroic sculpture of Steamboat, stands beside the UW arena and football field. He is one of five bucking horses recognized as the greatest broncs by the National Cowboy and Western Heritage Museum in Oklahoma City. And although artist Allen True said he had no particular horse or rider in mind when he designed the Wyoming bucking horse license plate in 1936, it’s commonly accepted in Wyoming that Steamboat is the horse depicted. As to which rider is aboard, that hotly contested issue is still raging nearly 70 years after the fact.