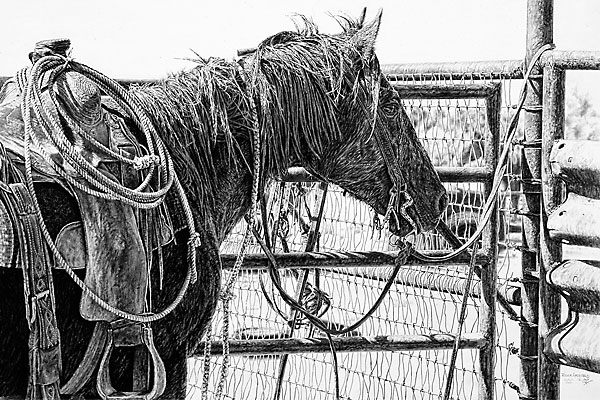 When people’s eyes first fall upon his black-and-white depictions of working cowboys and horses on ranches, more often than not, that is their most popular reaction.

“Some stuff of mine looks more photographic than others,” says Archibald, whose work has won multiple awards. “It’s photo realism.”

Charlie Russell started the tradition of capturing cowboys at work during the frontier era. In turn, Archibald is evoking the heritage and culture of ranch cowboying that inspired him as a young kid who grew up working and doctoring cattle.

Archibald can be seen as a modern-day Will James—except for the cattle rustling. Their artistic work exemplifies their lives.

For inspiration, Archibald visits ranches, taking pictures that will eventually turn into his next drawing. He has come to notice small changes around the ranch that did not used to exist.

“You didn’t see a cellphone in the branding pen…years ago, but you do now,” Archibald says. “So much of it has changed, but they still haven’t made a machine that you can gather cows, rope and doctor a cow. Maybe someday, but I hope not.”

Archibald prefers to sketch the rope and gear, especially the horses and their riders, in a startling contrast of shades that will make you wonder if color is even a necessity.

In Archibald’s drawings, his shading fills the paper from one corner to the other. Each strand of a horse’s hair falls perfectly into place, as do the creases of a cowboy’s well-worn jeans.

For a man who appreciates the traditional cowboy life, these drawings help to preserve what he considers is still a part of the world we live in today.

“I’m portraying something…that I dearly love, and it’s a lifestyle that I enjoy as do many others,” he says. “It’s just a way of documenting something—with a God-given talent that I have— that’s dear to my heart. If I wasn’t portraying that lifestyle, I’d probably be living it.”