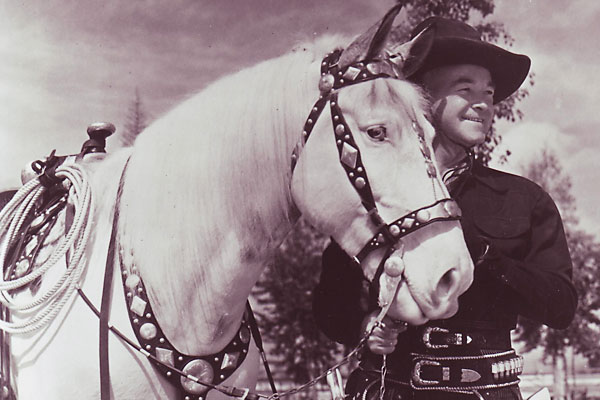 Although created as a fictional cowboy hero, Hopalong Cassidy—as portrayed by actor William Boyd—has become as real to millions of Western fans as if he had actually ridden out of the pages of true history.

Together, “Hoppy” and Boyd made their own Western history, and in the process became one iconic figure for generations. From the time of Boyd’s initial portrayal in 1935’s Hop-A-Long Cassidy as the character created by Clarence E. Mulford in his 1906 epic Bar 20, the die was cast. For the rest of his life, Boyd played Hopalong Cassidy and devoted much of his free time to his young fans. Fans loved him then as kids and revere his memory more than half a century later.

This legendary celluloid range rider inspired an exquisite brace of Colt Single Action Army (SAA) revolvers and gunleather outfit that will be raffled off at the end of this year in a charity to benefit abused children founded by Western celebrity icons Roy Rogers and Dale Evans. The “Silver Screen Legend X” Western rig continues the tradition of the first nine six-gun sets that have raised more than $800,000 for the abused children who reside at the Cooper Home, a project of the Happy Trails Children’s Foundation, in Apple Valley, California.

Colt’s Manufacturing Company’s President and CEO General William Keys and other good folks at Colt have saddled up once again to help this worthy foundation by donating two 1873 Colt SAA Model P revolvers. These Peacemakers—destined to be a family heirloom—are fully documented by Colt, which contributes to their value as a collectible. Each Colt was hand engraved in the style of Hoppy’s six-guns and fitted with hand-carved, genuine pre-ban elephant ivory stocks with the silver Colt medallions.

The handsome clones fit perfectly with the faithful reproduction of Hopalong Cassidy’s original double gun rig, incorporating all of the unusual features of his first outfit—which, incidentally, went through a number of transformations throughout its decades of use by Boyd. Beautifully handcrafted by Jim Lockwood, Jr. of Prescott, Arizona’s Legends in Leather, the gunleather rig features the original 1930s carving patterns. The white calf-laced rig is decorated with the proper sterling silver spots, hearts and stars, along with a carefully re-created copy of Hoppy’s gold and sterling silver hand-engraved 11⁄8-inch ranger buckle set. The set is housed in a hand carved wood case from Prescott woodcarver Ben Hansen.

Far from the rough, vulgar character created by Mulford, Boyd’s Hoppy drank, not liquor, but milk. To promote his shows, Boyd visited dairy farms across the nation, convincing the owners to let him endorse their milk. That label, stamped “Hoppy’s Favorite,” would certainly fit this Peacemaker gun rig set.