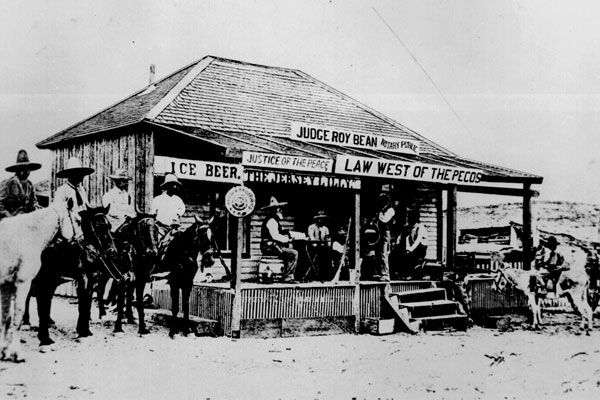 Movies have tried paint Judge Roy Bean, the “Law West of the Pecos,” as a hanging judge. Bean was more of a blowhard with an uncanny ability to know how much money a defendant was carrying and fine him accordingly. He once fined a corpse for carrying a concealed weapon, confiscating the dead man’s money and pistol.

My grandpa was an engineer on the Del Rio Eagle Pass Railroad and knew the judge. He said the nearest Roy Bean ever came to hanging a man was a prank. It happened when a trio of itinerants pilfered a railroad official’s pistol and wandered into Langtry afoot. They were apprehended and brought before the judge. Two were repentant and were fined and released. The third, a surly, cocky lad, cursed Bean and as a result was sentenced to “death by hanging.”

Since there weren’t any trees around Langtry tall enough to hang a man, they stood him up against a railroad boxcar. A noose was placed around his neck and thrown over the top of the boxcar. On the other side a cowboy dallied the other end to his saddle horn and prepared to uplift the culprit. By this time the terrified young man became repentant.  “Too late!” said the judge.

Billy Dodd, Bean’s one-man jury whispered in the condemned man’s ear, “When we ain’t looking, slip that noose off your head and run like hell and don’t ever come back to these parts.”

The “doomed” man nodded and at that moment, Judge Bean and the others in the hanging party looked skyward and closed their eyes in prayer. The noose was slipped off and the kid was last seen running for dear life. The boys went back into Bean’s saloon, the “Jersey Lily” and had a good laugh.