By the time the Pilgrims got around to settling Plymouth in 1620, Santa Fe had been a bustling community for more than a decade. For over four centuries now, the grand old city at the base of the Sangre de Cristo Mountains has been northern New Mexico’s center of government and culture, its distinctive Spanish-Pueblo adobe-style architecture a tangible expression of its rich history and multicultural traditions.

That’s no accident. “Back in 1912, the city fathers realized that Santa Fe was starting to look like any other town,” says John Pen La Farge, president of the Old Santa Fe Association, established in 1926 to preserve the town’s historical sites, structures and cultural traditions. “So they began to emphasize the Spanish architecture and the cultural aspects that sets the town apart.” Thanks to their efforts, today’s city reflects its heritage in a hundred ways.

Santa Fe’s roots run deep—the Ogapoge Pueblo, established around the 10th century, once stood on the site of today’s Plaza. The Spanish arrived in 1607; the region’s second provincial governor founded Santa Fe in 1610. When Mexico won its independence from Spain in 1821, Santa Fe became the territorial capital.

That same year, Missouri trader William Becknell established the 1,000-mile-long Santa Fe Trail from Franklin, Missouri, to Santa Fe. You can experience a section of the historic route today with a drive along the Santa Fe Trail National Scenic Byway, part of which traverses the northeastern part of New Mexico.

Gen. Stephen Kearny captured Santa Fe in 1846, early in the Mexican-American War. Afterwards, the town was formally ceded to the U.S.

Like many places in New Mexico, Santa Fe has a Billy the Kid connection. Billy’s mother, Catherine McCarty, married William Antrim (who became Billy’s stepfather), at the Presbyterian Church on Grant Avenue on March 1, 1873. Not long afterwards the family moved to Silver City, but Billy returned in late 1880 to serve a few months in jail. A plaque several blocks west of the Plaza tells the story.

For an overview of the town, start at the Palace of the Governors, built in 1610 to serve as the regional center of government. The Palace is the oldest public building in the United States. Next door you’ll find the New Mexico History Museum, where you’ll want to check out the “Santa Fe Found” exhibit, which examines the earliest days of the city. While you’re in the Plaza, you can shop for authentic Indian goods at the outdoor Mercado, or drop by the La Fonda, built in 1922 on the same site where other inns have stood since the town’s founding.

For museum-goers, Santa Fe is a kind of paradise. Interested in Indian art and history? Check out the Museum of Indian Arts & Culture, then drop by the Wheelwright Museum of the American Indian. Visit the Museum of Spanish Colonial Arts for more insight into the Hispanic heritage of the area. And if it’s historic churches you like, don’t miss the San Miguel Chapel, the country’s oldest church, built around 1610. You’ll also want to stop by the Cathedral Basilica of Saint Francis of Assisi, begun in the 1850s, and the Loretto Chapel, with its “miraculous” staircase.

In addition to the renowned Fiesta de Santa Fe (first celebrated in 1712), the town hosts a number of festivals and celebrations. Summer events include the Rodeo de Santa Fe and Parade, the Santa Fe Indian Market, the Traditional Spanish Market and the Summer Festival, Frontier Days & Horses of the West.

After a hard day on the history trail, kick back and relax at the Santa Fe Railyard, a vibrant commercial and social district. 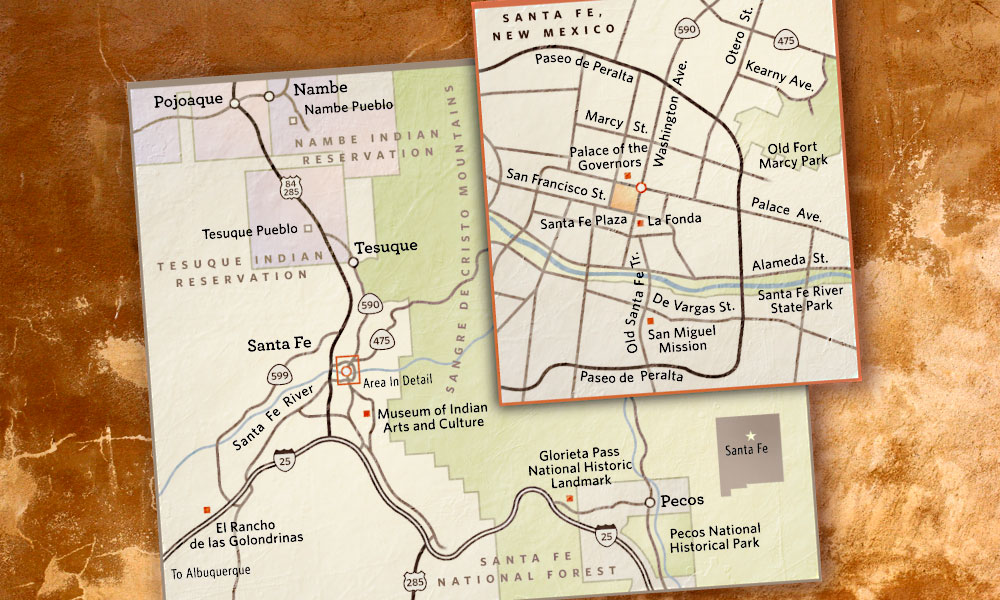