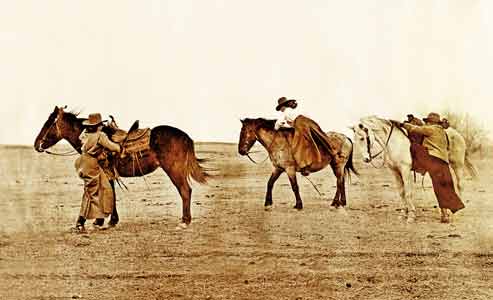 Yes, these were the cowgirls who had the gallto turn down President Teddy Roosevelt.

Their faces gleam on pictorial portraits captured by an acclaimed photographer of pioneer life on the eastern Montana plains, Evelyn Cameron. Taken between 1894 to 1928, her images, especially of ranch and farm women, are now famous historical treasures and prized collectibles.

Tom Roose did not know the identities of these three women roping, riding and branding calves on the open range when he first discovered their photographs in a box of photos and postcards at an antique shop in Corvallis, Oregon. Seeking to find out who they were and how this box of pictorial history from the Big Sky state ended up in the Pacific Northwest, Roose embarked on a journey that led him to a tiny Montana town still preserving the memory of these girls and to a grandson who has inherited their adventurous spirits.

In tracking Evelyn’s life, Roose learned she had been born in England, but she and her husband, Ewen, must have enjoyed their honeymoon in Montana because they ended up settling outside Terry, Montana, in 1893. Evelyn’s love for this land, bordered by the rugged Badlands and mighty Yellowstone River, is reflected in her photographs. Because Terry (population 600) is now the “Official Home of Evelyn Cameron”—with the Cameron Gallery and grave site—Roose contacted the Evelyn Cameron Heritage group, whose members preserve Cameron’s photos for public display.

“I was ecstatic to hear about Tom Roose’s find of some of Cameron’s original photos,” says Glenda Ueland, a director at the foundation. “As for the three women, they’re well known in Terry’s history.”

May, Myrtle and Mabel Buckley were the daughters of Franklin and Susanna. They gave birth to Elinor May in 1889, Myrtle, in 1891 and Mabel Pearl, in 1893. Originally from Ellendale, North Dakota, where the family farmed, the Buckleys also ranched 160 acres southeast of Terry, Montana, near Cabin Creek. While their father was busy with the North Dakota farm and other business ventures (he was also a Montana state representative in 1915), the sisters were given the responsibility of running the horse-and-cattle operation in Montana under Mother Buckley’s watchful eyes.

Born in the saddle and taught by some of the top cowhands in the area, the Buckley sisters were well-suited to running a ranch. Proficient at roping, riding, breaking broncs and branding calves, their skills were comparable to Montana’s best cowboys. Respected by their male counterparts, they earned the nickname “Red Yearlings” because of their strawberry-blonde hair and expertise as horsewomen.

Known throughout eastern Montana, the beautiful Buckley sisters were to gain national and international fame during their early twenties when Evelyn photographed them for her article about Montana cowgirls, which appeared in the June 6, 1914, issue of the English publication Country Life. Neighbors of Evelyn’s, May, Myrtle and Mabel were regular “action models” for the photographer.

Even before Evelyn, folks who recognized the Buckley sisters’ talents had tried to showcase them. Wild West shows asked to hire the sisters, but they weren’t interested in entertaining audiences. They “never competed in a rodeo or performed with a show,” recorded rodeo historian Mary Lou LeCompte in Cowgirls of the Rodeo. The Buckley cowgirls even declined an invitation from Teddy Roosevelt, who knew them from his many visits to Terry, to perform at the White House. The sisters were “serious cow people with ranching their only focus,” Roose says.

Nearly a century later, Roose has revived the Buckley sisters’ Montana legacy. “We have so much history here in Terry,” says Trish Harding, of the Evelyn Cameron Heritage group. “It’s wonderful to have more on the Buckleys.”

In the Cameron Gallery, large original prints feature May, Myrtle and Mabel galloping horses across the open range, lassoing horses inside a corral and posing on horseback alongside cowboys from the Texas-based XIT Ranch. But one image speaks volumes about the Buckley sisters’ independent natures. Mounting horses, the sisters are wearing split skirts, introduced to the cowgirls by Evelyn. At the turn of the 20th century, these skirts caused a sensation among women and consternation with men. (Evelyn was once threatened with arrest in nearby Miles City if she returned wearing the skirt.)

During his journey, Roose met Terry native Wynona Breen, before she passed away at the age of 89 last December. She spent the past three years transcribing all 35 diaries of Evelyn’s, from 1894 to 1928. “Evelyn recorded her daily experiences and the people she encountered,” Breen told Roose. “The Buckley family was mentioned in 174 diary entries.”

The last was penned on Tuesday, January 10, 1928: “Saw Buckley, like May without mustache. Told him malaria mosquito cure for paralysis. [Reference to Mother Buckley’s stroke in 1925.] Mrs. Buckley improving.”

In the years between, May, Myrtle and Mabel come to life. Take this diary entry, on Thursday, December 31, 1908: “Buckley girls are all sick from too much gaiety Terry & Fallon balls.”

Other entries also spoke of Evelyn’s photo endeavors with the Buckley sisters. Monday, December 22, 1913: “Arrived Buckleys…[girls] first roped their horses took 2 exposures & 2 of them posing corral bars background. They got 12 head of cattle & I took them roping one. When roped they strung it out & I photographed with May bending over looking for brand. More exposures & then girls galloping toward me & each one separately trotted past. Took 2 of Mr. B’s stallion ‘Rock’ Percheron.”

Then a surprising statement on Monday, October 25, 1915: “Myrtle Buckley ran away & married a hired man, named [Dave] Fisher.” Married on October 21, the couple would raise two children—Elinor “Snowball” and George—at their ranch near the Wyoming border.

“Later on, Myrtle also married George Straugh and combined her ranch with his,” Breen says. “I don’t know what happened to Dave Fisher.”

As for May, who never married, she continued ranching and took care of Mother Buckley after her stroke. Mrs. Buckley died in 1932, followed by 50-year-old May in 1939. Mother and daughter are buried in Glendive alongside husband and father Franklin, son and brother Mark and his wife Petrena. (The grave site also has a marker for a baby, Joy Susan, though Roose did not locate a birth record for her.) Myrtle was laid to rest in 1964 in Broadus, Montana; Mabel, in 1986 in Tacoma, Washington.

Mabel, who married Milton Gile in December 1915, had a son Selman, who had a son Jay. Jay Gile was the final piece to Roose’s puzzle. Jay lived in Corvallis, which answered the question of how Evelyn’s photos of the Buckley sisters ended up in Oregon. Jay had inherited the collection, including Mabel’s school notebook, her 1905 diploma, a celluloid cowgirl hat-shaped pin and many postcards from enamored suitors. When he downsized his collection, Jay sold the extra images to the antique shop.

“I have three children who aren’t interested in the photos because they don’t know the relatives in the pictures,” says Jay, who has the Buckley reddish hair and passion for adventure as an international parachutist. “But it’s nice Tom Roose and the people of Terry have an interest in my grandmother and aunts.”

While he showed his Buckley family photos in his beige velvet photo album to Roose, Jay described the Buckley sisters as “strong women way ahead of their time.”

In their boots, the Buckley sisters embraced toughness in a tough land. Land that Roose wanted to see before leaving Terry. Enlisting the help of retired rancher Eddie Gaub, whose mother had conducted the household chores for Evelyn before Roose was born, Roose drove with Gaub down dirt roads to the Buckleys’ former ranch. An old wagon still sits by the entrance.

Walking the hilly property, with cattle enclosed in a nearby corral, Roose reflected on his journey of discovery that had begun with that box of antique photographs. “I wasn’t sure what I was going to find, but it’s exactly what I was hoping for in Terry and with Jay Gile.”

The Red Yearlings have indeed made a lasting historical mark on Montana.

Sue Hansen lives in Corvallis, Oregon, and has contributed articles to Persimmon Hill and Paint Horse Journal, among other publications.