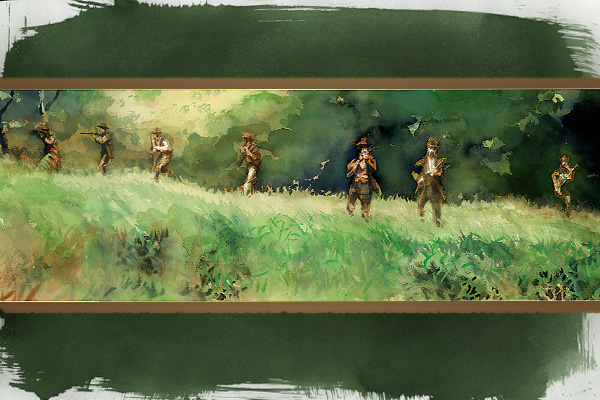 Four fleeing outlaws, believed to be the robbers of the First National Bank in Northfield, Minnesota, slip into a slough on foot and disappear into a dense thicket of wild plums and vines.

Surrounding the slough, two Civil War veterans, Sheriff James Glispin and Capt. William W. Murphy, ask for volunteers to go in and flush out the desperados. Of the dozens of men on the scene, and anywhere from 40 to 150 “sightseers” present, only five step forward.

Sheriff Glispin, Capt. Murphy and their five volunteers make their way down into the river bottom and spread out at 15-foot intervals. Their orders are to fire only if fired upon, and even then, to shoot low, so that the fugitives might be encouraged to surrender.

Hunkered down in the dense plum thicket, Charlie Pitts and the Younger brothers, Cole, Jim and Bob, ponder their predicament. “We are surrounded,” Pitts says. “We had better surrender.”

Cole replies, “Charlie, this is where Cole Younger dies.”

“All right, Captain. I can die just as game as you can,” Pitts responds. “Let’s get it done.” With those words, Pitts stands and fires.

Dropping to one knee, Sheriff Glispin fires back, hitting Pitts in the chest (so much for shooting low). As the outlaw falls backward, the plum thicket is riddled with bullets from numerous posse guns, including those up on the surrounding bluffs.

The Youngers return fire. A bullet hits one of the posse members, George Bradford, on the outside wrist of his trigger hand and exits through the elbow of his shirt. Another posse member is hit, and he grabs his side. Muskets and shotguns belch from the high bluffs, and puffs of smoke billow through the tops of the trees. The branches above the hunters in the slough are clipped by incoming fire, sending splinters and leaves down on their heads.

As the smoke clears, there is a pause. Captain Murphy quickly checks his side and finds his large, rosewood pipe broken, but no blood. The spent bullet is stuck in his cartridge belt.

“I surrender. They’re all down but me!” says a voice from the thicket.

“Hold your fire!” yells Glispin over his shoulder, before turning back to the front. “Step out with your hands high.”

Glispin eyes the thicket, wary of a trick or a trap. “Come out in the open and raise what you got!”

The hunters cautiously look down their rifle sights as Bob Younger hobbles out into the clearing. He is waving a white handkerchief in his left hand, but it is more dark red than white. Another shot, this one from back up on the bluff, rips through the trees. The youngest Younger crumples in the grass. “I was surrendering,” Bob moans, “and you shot me.”

Sheriff Glispin yells, “I told you to hold your fire! I’ll kill the next man who shoots!”

Now it is deathly silent in Hanska Slough as all the hunters in the bottomland hold their positions and quickly reload.

Inside the hollow, the outlaws lay scattered in contorted poses. “Bring a wagon down,” Sheriff Glispin barks.

Glispin walks up close and puts his hand on Jim Younger’s shoulder, saying, “Boys, this is horrible, but you see what lawlessness has brought to you?”

At Hanska Slough, a ball enters just behind the angle of the right side of Cole’s jaw, passing over the palate arch and lodging in the left side of the upper jaw. He also has four bullet wounds in the back (no one knows if these injuries came from Northfield or Hanska Slough). Buckshot has penetrated his left shoulder blade, another two inches below, both lodging in fleshy parts and two inches deep. Another has entered the middle third of his arm, passing upwards two inches; still another has passed behind his armpit. His feet are painful to the touch, and his toenails come off when his boots are removed.

A ball enters the center of Jim’s upper jaw, destroying nearly half of his upper jawbone. Witnesses later see pieces of his jawbone removed in which there are two or three double teeth. His upper lip is swollen and the inside of his mouth is sore, making it difficult for him to speak. Jim was also hit by buckshot in the fleshy part of his middle thigh. A doctor gives Cole and Jim Younger opiates to help them sleep.

In Hanska Slough, Bob is hit by a ball that enters just below the right side of his shoulder blade, passes around the body and exits near the nipple. His broken arm, which he sustained in Northfield, is nearly healed by the time the doctor examines him. He is a large man, light complexioned, no beard; at his capture, his face looks recently shaved. He is intelligent, shrewd and not as communicative as either of his two brothers.

Pitts is six feet tall, 175 pounds, with thick black hair and a heavy moustache and goatee. The fatal bullet enters his left breast, one inch from the center of the breastbone and approximately three inches from the neck. Pitts’s corpse will be shipped to St. Paul and displayed in the west wing of the capitol. Over 2,000 of the curious will pay 10 cents each to file past the dead robber.

Expecting to be hanged, the Youngers were amazed at the warm hospitality given them by their captors. The Youngers were housed in the Flanders Hotel, where Mrs. Vought provided clean sheets for the body of Charlie Pitts, as well as clean underclothes for the Youngers. Many local women prepared food, both for the captives and for the throngs of people who showed up to see the criminal celebrities. Mrs. Guri Sorbel sent flowers. Her son Oscar had been the one who alerted the countryside, and she was afraid the outlaws would send other gang members to kill him. She obtained special permission to visit Bob Younger at the hotel and pleaded with him for forgiveness. Bob replied, “I have nothing to blame you for, madame.”

Several church ladies spoke to the boys about the terrible lives they had lived and begged them to repent. When an older lady, whom they considered kind, brought up the subject of their mother and sisters, the tears began streaming down the cheeks of the brothers, and then all of the women began to cry in “audible sobs of grief.”

The Youngers received life sentences. Bob Younger died from his wounds in 1889 while still in prison. After 25 years, Jim and Cole were finally paroled in 1901 (they couldn’t leave the state), but Jim soon committed suicide. Cole received a conditional pardon in 1903 and returned to Missouri. After a national tour with the Frank James & Cole Younger Wild West Show, he went on the lecture circuit, speaking about “What Life Has Taught Me.” He died at age 72 in 1916 with 11 bullets still in his body.

Recommended: When the Heavens Fell: The Youngers in Stillwater Prison by John J. Koblas, published by North Star Press.