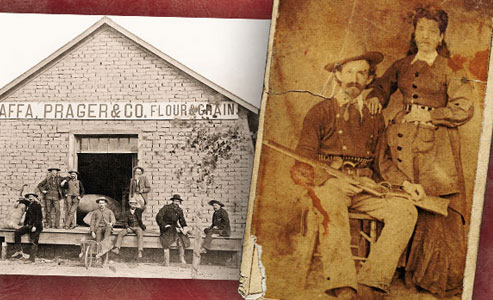 Riding at midnight through deep snow, Sheriff-elect Pat Garrett leads a 13-man posse eastward out of Fort Sumner, New Mexico. After questioning several people in Fort Sumner and ascertaining the Kid’s dress (“especially his hat,” which is said to be a Mexican sugarloaf with a green hatband), Garrett decides he won’t take any chances.

When the Kid makes his appearance, Garrett will kill him and hope the rest surrender.

After a 10-mile ride to the Brazil-Wilcox Ranch, where Billy the Kid and his compadres were last seen, Garrett picks up their trail clearly in the snow. “Following this trail a short distance,” he recounts, “I [am] convinced that they had made for Stinking Spring.”

Garrett sends a message to Stewart of their plan of attack: “stealthily enter the house, cover them with our guns and hold them until daylight.”

The men shiver and attempt to stay warm until daylight (about a four-hour wait). It’s so cold, posse member Charlie Rudolph gets frostbite on his feet. As the posse members wait, they hear snoring from inside the rock house. The hours drag by and the temperature seems to get colder as the men look for any sign of movement from the “inmates.”

The lanky sheriff commands a direct view of the doorway. While waiting for the Kid’s sombrero to pop into view, Garrett orders his men: “when I bring up my gun, [you] raise and fire.”

As the weak rays of sunlight begin streaking the horizon, the posse hears movement in the house. Shortly, a man appears in the doorway with a nose-bag (feed bag for the horses). The man’s head is down, but Garrett sees a Mexican hat with a green band and brings his Winchester rifle to his shoulder. Seven bullets rip through the pale dawn light.

Garrett yells for him to come out with his hands up. As Bowdre staggers to the door, the Kid catches hold of his belt, draws his revolver around in front of Bowdre and says, “They have murdered you, Charlie, but you can get revenge. Kill some of the sons-of-bitches before you die.”

Bowdre comes out with his hands barely up. He stumbles toward the posse until he recognizes Garrett, and he goes straight at him. Motioning with his hands at the house and strangling in his own blood, he gasps, “I wish … I wish … I wish….” Then with a whisper, “I’m dying,” as he falls into Garrett’s arms. The lawman gently lays him on his blankets.

As the morning light brightens, Garrett notices the rope ties on one of the outside horses is moving. He quickly surmises that the outlaws are trying to bring the horses inside in order to make a break. Garrett shoots the horse dead, and it drops in the doorway. To stop anymore attempts, Garrett takes careful aim and shoots the ropes of the other horses. The animals “walk away” and are captured by Stewart’s men.

“Can’t do it, Pat” the Kid replies, “business is too confining. No time to run around.”

Garrett decides to eat breakfast, so he goes with half the men back three miles to the Brazil-Wilcox Ranch headquarters.

Emory and East are appalled at Mason’s treachery and aim their Winchesters at Garrett’s brother-in-law. One of them says, “If you fire a shot, we’ll kill you.” Mason backs off.

On Christmas Eve, Billy the Kid said goodbye to Paulita Maxwell under the mistletoe as Paulita’s mother kept posse members James East and Lee Hall at bay (above). Somewhat embarrassed, Dirty Dave Rudabaugh was along for the ride because he was shackled to the Kid.

Saint Nick and the Christmas Tree were already essential parts of the Yuletide holiday, as shown on the cover of the December 25, 1880, Punch magazine (inset).

Sheriff Pat Garrett successfully delivered the Kid to the Santa Fe authorities on December 27. Over a year passed before he could collect the $500 reward.

After the Kid, Rudabaugh and others failed to dig their way out of the Santa Fe jail, Rudabaugh was sent back to Las Vegas, where he did successfully dig his way out and escape the territory. The Kid was sent to Mesilla, where he was tried, convicted and sentenced to hang for the murder of Sheriff William Brady. Billy didn’t meet that appointment.