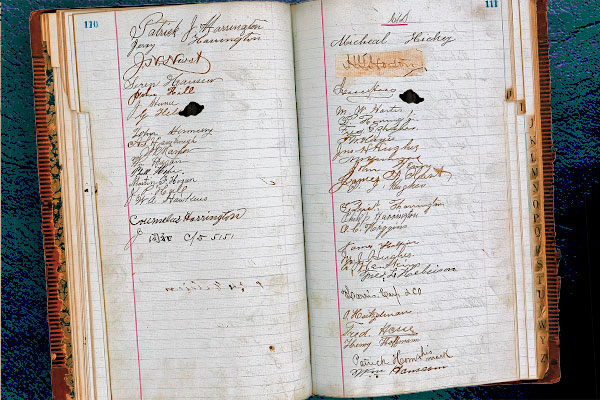 Inspired by the Arthurian quest to acquire the chalice of the Last Supper that received Jesus Christ’s blood from his crucifixion, collectors use the term “Holy Grail” to refer to a hard-to-find or rare piece that they must own to complete their collection.

In the Old West arena, just three years ago, photo aficionados went wild for their Holy Grail, the original tintype of Billy the Kid that sold at Brian Lebel’s Old West Auction. For the philographists in this circle, theirs has just sold: an 1880-81 signature book of the Pima County Bank in Arizona that preserves the autographs of hundreds of Tombstone citizens inscribed during the era of the Wild West’s most famous gunfight, the battle behind the O.K. Corral.

To cite the signatures included is mindboggling, especially in a world where if something seems too good to be true, it probably isn’t. When said item is also linked to Tombstone collector John Gilchriese, skepticism rises even more. Although some items the field historian acquired have been called into question, this book is the real deal.

So here goes, prepare to have your mind blown. The top lot sold at Heritage Auctions on June 14, for a $55,000 bid, contains the signatures of notable characters who include: Wyatt and Virgil Earp, Ike and N.H. Clanton, J.H. Behan, J. Hume and Fred J. Dodge. Distinguished from his brother Tom McLaury’s signature, Will signed “Fort Worth” after his W.R.; the attorney had come to Tombstone from Texas to become a member of the team prosecuting the Earp gang after the shoot-out behind the O.K. Corral on October 26, 1881. Even more, this book features the only known signature of Doc Holliday’s paramour, Kate.

Collectors collectively earned more than $450,000 on notable Old West treasures at the Legends of the West auction.