One picture of the famous Hunkpapa Lakota Chief Sitting Bull wearing a crucifix is as iconic as it is enigmatic. History claims missionary Pierre-Jean De Smet gave Sitting Bull the crucifix.

In late January 1885, Sitting Bull arrived in Bismarck, Dakota Territory, with his brother-in-law Gray Eagle. During their stay, D.F. Barry took their pictures. Both men wear a crucifix around their necks.

New research reveals that everything we know about the crucifixes they wore is wrong.

The One Bull Link

Stanley Vestal, Sitting Bull’s first biographer, linked the crucifix to De Smet. The Catholic Belgian missionary had tried to establish an “Indian State” in the Rocky Mountains area during the 1840s and 1850s. When he failed, the American government hired him to convince “hostile” Hunkpapa to sign the Treaty of Fort Laramie.

De Smet traveled to the camp without a military escort, a move deemed suicidal. Sitting Bull’s reputation at that time can be compared to that of Osama bin Laden after the attacks of 9/11.

The missionary succeeded in convincing some Lakota Sioux to sign the 1868 treaty, which ended Red Cloud’s War, a bloody conflict that forced the U.S. Army to abandon all forts in Montana Territory. A treaty negotiation is how De Smet and Sitting Bull first met, on June 19, 1868, along the Powder River. They never saw each other again.

After these peace talks, De Smet gave Sitting Bull a crucifix, Vestal claimed. He wrote that the crucifix was shown in a “well-known photograph of the chief by D.F. Barry.”

Neither De Smet nor any other eyewitness of the talks wrote that the missionary had given Sitting Bull a crucifix. Vestal got his information about De Smet’s gift from two others.

Vestal recorded the testimony of Sitting Bull’s nephew One Bull in 1929: “He [One Bull] has in his possession a crucifix, which Father De Smet had presented to Sitting Bull in 1848 [sic] at Powder River Country and another crucifix he was presented by Bishop Marty, when Sitting Bull was in Canada.”

His first attempt was successful; Sitting Bull surrendered in 1881. Yet the chief refused, to his dying day, to convert to Catholicism because he did not want to become monogamous.

Eugene Little Soldier corroborated One Bull’s testimony. He was a member of the detachment of Indian Police that arrived at Sitting Bull’s cabin on December 15, 1890, to arrest him.
During the debacle, Sitting Bull was fatally shot twice.

So where are the crucifixes?

Vestal wrote about the crucifix in One Bull’s possession. In 1935, Vestal unsuccessfully tried to sell it to Albert G. Heath’s Museum of Amerind Arts in Chicago, Illinois. In a March 1957 letter, he wrote that he still owned the crucifix “which father Pierre Jean DeSmet gave him [Sitting Bull] at the treaty on Powder River. He is shown wearing this in one of the old photographs.”

One Bull’s crucifix stayed with Vestal’s family. Hayden Ausland, one of Vestal’s grandchildren, says the crucifix is now on display in the visitor’s center at the Little Bighorn Battlefield National Monument.

Vestal “claimed some members of Sitting Bull’s family had given him [the crucifix], telling him it was the very one that De Smet gave Sitting Bull,” Ausland says. “I myself doubt at least the identification, since some details compare only approximately with the one hanging around the chief’s neck in the well-known photo.”

Another crucifix attributed to Sitting Bull is on display at the State Historical Society of North Dakota museum in Bismarck, North Dakota. It was acquired by the museum in 1930 from Frank Zahn, who acted as an agent for Philip Bullhead.

On Sitting Bull’s last day of life, Philip’s father, Lt. Henry Bullhead, headed the detachment of Indian Police sent to arrest the chief. Bullhead was mortally wounded during the incident. One of his subordinates was Eugene Little Soldier.

Testimonies bolster the claim that Sitting Bull’s cabin was plundered and his body was mutilated. During the autopsy, U.S. Army Dr. Horace M. Deeble cut off a piece of Sitting Bull’s hair to save and stole his leggings.

Another soldier stole the painting of Sitting Bull made by Caroline Weldon, a New York activist helping Sitting Bull in his struggle against the cutting up of the Hunkpapa reservation.

Several museums in the Midwest, including the Buffalo Bill Center of the West in Cody, Wyoming, and the museum in Bismarck, North Dakota, own artifacts that once belonged to Sitting Bull and that were in the chief’s cabin at the time of his death.

Bullhead’s family may have owned objects stolen that day. On the other hand, no known record states Sitting Bull was wearing a crucifix when he was shot or that one was found in his cabin after his death. 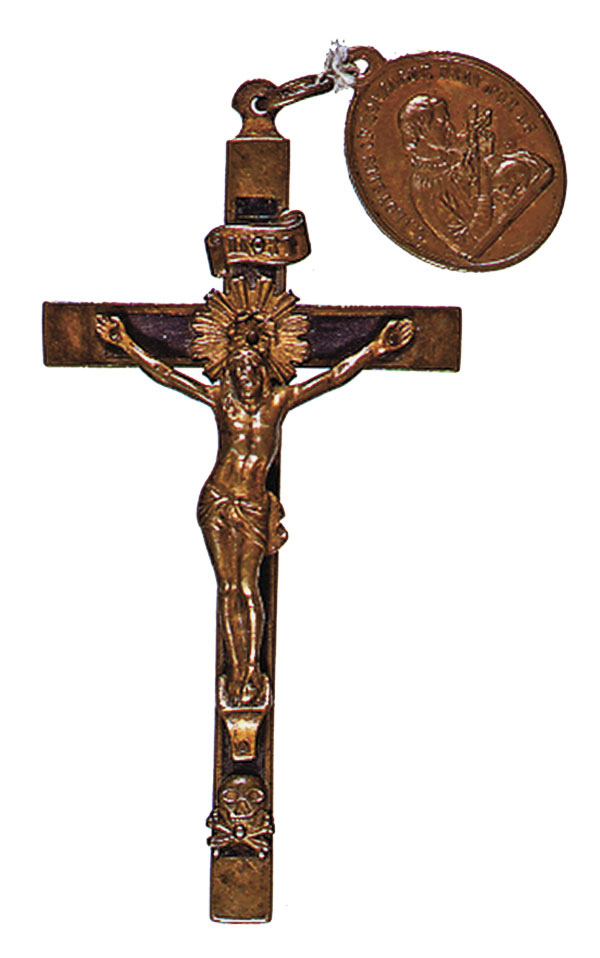 The Bullhead crucifix is strikingly different than the crucifix Sitting Bull wears in the Barry photograph. “Note especially the extent of the ebony inlay beneath the memento mori,” wrote R.C. Hollow, in the article “Sitting Bull: Artifact and Artifake.”

The distance between Jesus Christ’s feet and the skull and bones is much bigger in the Sitting Bull photograph than it is on the Bullhead crucifix.

“This does not establish that our crucifix was not owned by Sitting Bull; Sitting Bull, after all, may have had a whole parflesche full of crucifixes, but the non-identity of the Zahn [Bullhead] crucifix with the one positively associated with Sitting Bull certainly does nothing to relieve healthy skepticism,” Hollow concluded.

Sonja LaPointe, Sitting Bull’s great-great-granddaughter, sheds new light on the discussion. “As for the crucifix, even if Father De Smet gave him one, we do not have it. There is no proof that Sitting Bull ever owned one. Sitting Bull did not believe in Christianity, that’s why he was killed. The crucifix he was wearing in a picture belonged to his brother-in-law Gray Eagle. Gray Eagle was a Catholic and always tried to convince Sitting Bull to convert.”

Gray Eagle did indeed convert to Catholicism. He also plotted against Sitting Bull in the days before his arrest and killing.

Father Francis M. Craft, who worked at Standing Rock during the 1880s, also tried to convert Sitting Bull to Catholicism. He was asked to do so by Bishop Marty. The conversion of one of the best-known American Indians would have been a huge propaganda move for the Catholic Church. The competition between Catholic and Protestant missionaries was strong.

Marty requested as many pictures of Indians wearing a crucifix as possible. He wanted to show them to Pope Leo XIII during an official visit in April 1885, a few weeks after Sitting Bull’s and Gray Eagle’s photo shoot with Barry in Bismarck.

Barry took several pictures of Indians wearing a crucifix. Gray Eagle wears one that appears identical to the one Sitting Bull is wearing in his photo.

This corroborates LaPointe’s account: the crucifix around Sitting Bull’s neck was not one Father De Smet gave him, but one Gray Eagle hung around his neck to please Bishop Marty.

Was Vestal wrong about the Sitting Bull crucifix his descendants have been preserving? Is the crucifix worn by  Sitting Bull not a gift from De Smet, but one Gray Eagle gave him to wear for a photo shoot?

An examination of the crucifix worn by Gray Eagle in the Barry photo shoot reveals that his crucifix is different, not the same, as the one worn by Sitting Bull. He didn’t just loan his crucifix for his brother-in-law to wear after all. Sitting Bull had his own crucifix to wear.

The biographer’s crucifix offers a clear chain of ownership: De Smet, Sitting Bull, One Bull, Stanley Vestal and Hayden Ausland. One Bull, who lived with Sitting Bull for decades, had more opportunities to obtain the crucifix from his uncle than Bullhead or his family did. One Bull was also close to Gray Eagle.

The Bullhead crucifix provenance is more problematic. The raiding of Sitting Bull’s cabin and body is well-documented in official reports, but not one mentioned  a crucifix.

Astonishing how specialists failed to compare the two crucifixes and ended up calling the “real” De Smet crucifix a “fake.”

Belgian journalist and writer Karl van den Broeck based this article on research for his 2016 historical novel, Why I Want to Save the Indians: In Search of the Cross of Sitting Bull.

July 2, 1868: At the behest of Father Pierre-Jean De Smet (right), Gall and others at Fort Rice ratify Treaty of Fort Laramie, forming the Great Sioux Reservation.

August 1876: Standing Rock Agency reports 1,525 on reserve, based on tipis now multiplied by five. Inconsistent data methods, as well as ignoring Indians off the reserve on hunts or trips, result in unreliable early Indian census figures.

December 30, 1878: Standing Rock Cantonment is renamed Fort Yates to honor Capt. George Yates who was killed at the Battle of the Little Big Horn.

1880: A special Indian census is authorized for Washington and Dakota Territories, and California. Standing Rock is the only Dakota reserve counted.

January 2, 1881: Gall (right) surrenders to Army at Fort Buford in Dakota Territory; David F. Barry takes the first photograph of Gall, calling it the only one he ever took of an Indian as a hostile.

August 26, 1881: Dakota Indian William Selwyn takes census of Sitting Bull, Gall and others. He counts 4,293, in the first and earliest known complete census from any Lakota reservation.

September 17, 1881: After being forced to leave Standing Rock on September 10, Sitting Bull and band arrive at Fort Randall.

December 1882: Indian Rights Association is organized; one of the founders, Herbert Walsh, toured Great Sioux Reservation in summer of 1882.

May 15, 1883: Under Standing Rock Agent James McLaughlin, Gall becomes assistant farmer. By September, he becomes district farmer, which he serves until 1892.

August 15, 1883: McLaughlin writes how Sitting Bull is much inferior to Gall.

July 4, 1884: Indian agents are told they must include an Indian census in annual reports.

August 21, 1888: Gall gives a speech in Washington, D.C. to respond to Pratt Commission’s attempt to convince Sioux to agree to the Dawes Act.

July 1889: At Standing Rock, Crook Commission convinces Gall and others to sign the Sioux bill. Sitting Bull refuses to sign. The separate reservations mean Lakotas must get permission to cross land claimed by settlers to travel to kin and friends.

December 15, 1890: Sitting Bull is killed while being arrested by Indian Police under McLaughlin’s orders.

December 5, 1894: Gall dies by drinking too much of an unsafe medicine, reports his friend and photographer D.F. Barry (left).