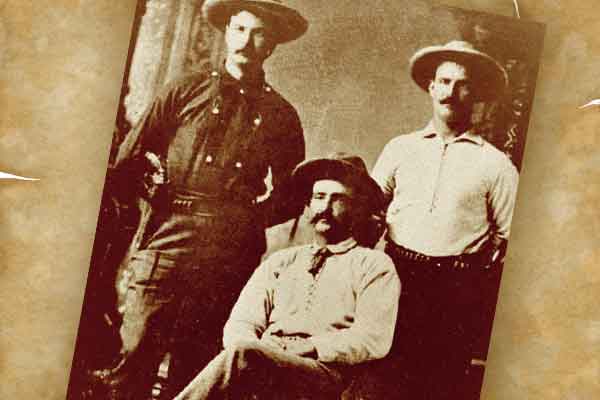 There are a lot of tall tales about the Gunfight at the O.K. Corral in Tombstone, Arizona. This is not one of them.

No, this is a short reminder of how the movies skew our view of Old West figures—in this case, Frank and Tom McLaury. Just in case you’ve forgotten (or never been exposed to the story), the McLaury brothers were two of the Cowboys who took on the Earp brothers and Doc Holliday at the famous shoot-out on October 26, 1881.

Frank and Tom lost the battle and their lives (as did their compadre Billy Clanton, whose older brother Ike fled the scene when the guns started roaring). The combined funeral was one of the largest in Tombstone history; the three now repose side by side in Boot Hill.

Western movies make it appear that all the combatants on that cold winter day were about the same size—six-footers, give or take—except for teenage Billy Clanton, who is often portrayed as smaller, “just a kid.”

There is a famous photo of the dearly departed in their caskets, just prior to the funeral. If you look closely, you’ll see something surprising. Nineteen-year-oldBilly, on the right, is significantly taller than Frank and Tom (former Tombstone historian Ben Traywick believes the youngster was about 6‘2“). Next to him is Tom; his specially-made casket  is much shorter. Next to him is his brother Frank—and his casket is shorter yet.

This means that “Frank was about 5‘3“ or so, and Tom was around 5‘5“, maybe 5‘6“,” McLaury expert Paul Lee Johnson says. He’s been researching the family ever since he was 14; his results are due out in June when the University of North Texas Press publishes The McLaurys in Tombstone, Arizona: An O.K. Corral Obituary.

Sure, the average American male of the 1880s was shorter than his modern counterpart. But 5‘3“ is short. Really short.

“It runs in the family. Most of the McLaury men were small. That’s what their great-nieces told me,” Johnson says.

Granted, no specific measurements are available, at least none that have been found. Johnson admits he is guesstimating—although a number of Earp experts believe his figures are correct. The bottom line is that Frank and Tom McLaury were short, even for that period.

There’s a bit more evidence. Another photo of the McLaurys—disputed by at least some Old West aficionados, but believed to be authentic by Johnson—shows the pair standing on either side of journalist John Finerty. He’s around six feet. They are nowhere near that size. In fact, Finerty’s head reaches near Frank’s shoulder.

The size issue puts a somewhat different spin on the Tombstone situation. The McLaurys had confrontations with the Earp faction prior to the gunfight. In fact, just an hour or so before the ball opened, Tom and Wyatt Earp got into a heated argument outside the courthouse. Witnesses recounted how Tom had to look up at the lawman as they yelled at each other. Wyatt ended the discussion by bending a gun barrel over his adversary’s head.

Did the McLaurys feel threatened by men who were more than a half-foot taller than they were? If so, might they have been more inclined to carry concealed weapons as protection, in spite of Tombstone laws prohibiting it? When confronted by the Earps and Holliday in the empty lot on Fremont Street, would they have instinctively reached for their hardware—not to surrender, but to actively defend themselves?

It’s all speculation, as is so much of the Tombstone story. But with the publication of Paul Lee Johnson’s book, it’s certain that the tale of the McLaurys won’t be getting short shrift any time soon.