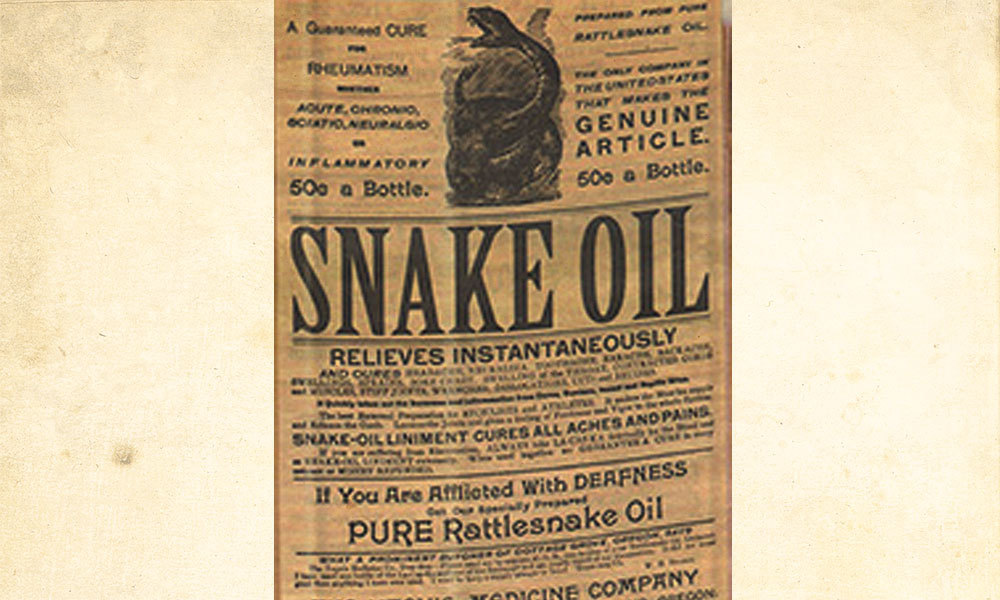 Curing ailments were quite popular in the 19th century. Patent medicines promised to cure everything from male impotency to unmentionable female disorders. Contents usually consisted of opium, alcohol, and sweet cherry juice. They cured nothing but made the user feel good. Many temperance ladies would load up on the stuff and would go out bashing saloons with their hatchets. Then they’d go home and drink another pint of 100 proof and be fired up to go out again the next day and bash some more saloons.

They had names like “Kickapoo Indian” potions and “Bissell’s Tonic Bitters.” And there was “Dr. Foley’s Kidney and Bladder Cures in the Friendly Brown Bottle.”   And, “Bumstead’s Worm Syrup,” promising to kill a hundred worms a bottle.

They’d put a picture of an American Indian on the label and give it an Indian name as this conjured up in the consumer thoughts of magical Native American cures.

The term “snake oil” comes from the 19th century Chinese railroad workers who used medicine made from the Chinese water snake that was rich in Omega 3 acids and very effective for treating arthritis and bursitis. They shared it with their American counterparts who were amazed at its healing process. Later, the term took on a different meaning when patent medicines purported giving women larger breasts, giving men more virility and curing every disease known to mankind. These useless cure-all medicines became known as snake oil medicines. They were mostly alcohol.

Since there were no Chinese water snakes in America entrepreneurs began using the rattlesnake oil as a cure-all. One “snake oil” salesman even had a washing machine wringer on the back of his wagon to squeeze the oil from snakes.

Perhaps the best-known of these snake oil salesmen was Clark Stanley, the self-proclaimed “Rattlesnake King”; a former cowboy who claimed he learned his healing powers in Arizona from Hopi medicine men. He made a big production of pulling a rattler out of a sack, slitting it open and dropping the snake into a pot of boiling water. The rattlesnake oil was not nearly as potent as the Chinese water snake so Stanley added mineral oil to his concoction. The law eventually caught up with him and he was fined twenty dollars.