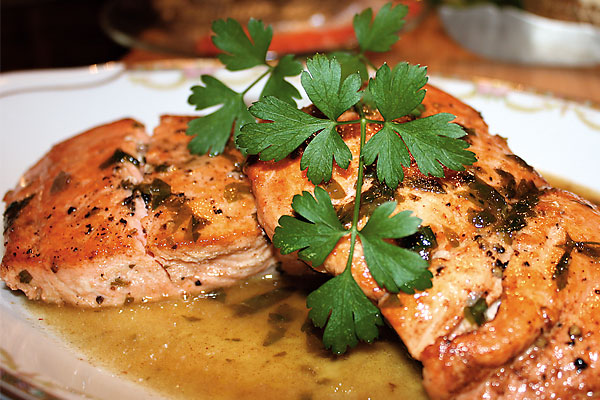 “While travelling along the Snake River, father secured a fine, large salmon from an Indian, and we looked forward to a good feast at supper time.

There being no wood, the salmon was cut up and put in a pot hung over a fire of bunchgrass…. It was the first salmon we had ever tasted, and there is no doubt it was highly relished,” recalled 1852 Oregonian emigrant James Meikle Sharp.

Fish may not be what first comes to mind when you think about frontier fare, but fish was eaten more often than you might realize. Coastal Indians, pioneers who lived near lakes and Westward emigrants frequently dined on fresh fish.

Towns with water nearby offered locally caught items, while merchants sold landlocked businesses a variety of fish: smoked, tinned and in barrels. In 1872, a can of salmon cost 35¢, a box of oysters was 23¢ and a box of sardines cost 30¢. Mrs. Ford, who lived in Canyon City, Oregon, after the 1862 gold strike, remembered, “The stores used to keep huge barrels of pickled mackerel and salmon bellies. The fish was a real Sunday treat in the winter time.”

Store merchants all over the West advertised their fish offerings. On January 9, 1873, Taylor & Gilbert advertised in the Dakota Republican in Vermillion, Dakota Territory, “You can get White Fish, Mackerel, Codfish, Herring, Hake, Halibut, California Salmon, and also some of that nice Breakfast Codfish.”

Restaurants of the day reflected Victorian cooking trends. Regardless of their location, many restaurants offered specialties like Baltimore oysters, brook trout, lobster and salmon from the Russian, Columbia and Colorado rivers.

So how did they got oysters from Baltimore, Maryland, to say, Tombstone, Arizona? Nope, they didn’t rely on dry ice, because it wasn’t used commercially until the 1920s. They used railroad cars  packed with large chunks of ice and hay. (Yet one wonders how the fish kept cold on a stagecoach traveling in the Arizona heat from Tucson to Tombstone in 1880.)

Popular menu items included salmon, trout, oysters and codfish. Victorian cooks prepared these viands in many ways, including boiled salmon with egg or Italian sauce, trout a la Royale, escallops of red snapper, oyster patties, oysters on the half shell, broiled white fish, lobster au natural and salmon Maitre d’Hotel sauce. Boiled and broiled were the two most popular ways to cook fish, but broiling in the 1800s was like grilling  today. The fish was put on a gridiron, which was placed over an open flame.

Now imagine you’re at the beautiful Capitol Hotel in Boise, Idaho, in the 1890s, ordering salmon Maitre d’Hotel sauce off the menu. Okay, you can’t go there today, but you can make this classic Victorian recipe at home, enjoying what the guests dined on all those years ago.

2 pieces of salmon, about one-inch thick
Salt and pepper to taste

Rinse and dry the fish. Then salt and pepper as you like. Heat the grill or grill pan to medium high. Place the fish skin side down and cook for about three minutes. Carefully turn the fish over and cook for 3-5 minutes. Remove the skin before saucing, if you like.

Melt the butter over low heat. Then add the lemon juice and parsley. Taste and add salt and pepper as needed. Place the fish in the pan and turn to coat with the sauce. Place the fish on a platter and pour the sauce over it. Garnish with fresh parsley.