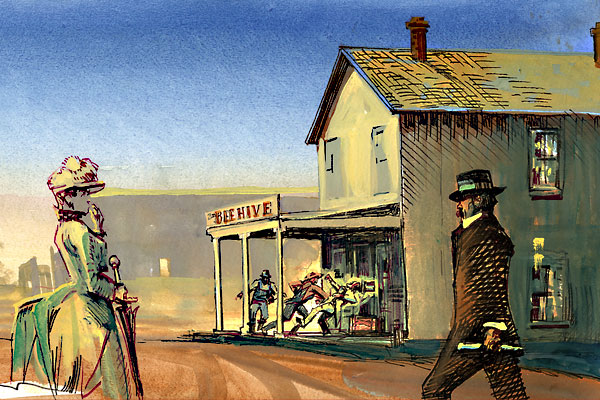 John J. Cozad is negotiating a trade in the Bee Hive General Store, which is run by his mother-in-law, Julia A. Gatewood, who sits behind the counter. John and a local, Henry Drew, sit in chairs in front of the counter, bartering with her.

The front door opens, and in comes a local farmer Alfred (sometimes styled as Al or Alf) Pearson, who bellows, “Cozad, I hear you are going to sue me.” But before John can answer, Pearson adds, “If you say that my stock injured your hay ground, you are a liar.”

John stands and demands that Pearson leave the store, as he should not say such harsh words in the presence of a woman.

Pearson admits he didn’t know John’s mother-in-law was in the store and asks John to come outside to discuss the issue at hand.

Pearson walks out first, and John follows. On the boardwalk, Pearson starts up again with his complaint, “I hear you are going to sue me.”

“I am if you don’t keep your stock off of my land,” John replies.

One of the two, eyewitnesses can’t remember who, uses the word “liar.” Then witnesses see Pearson punch John in the face, knocking him backwards into a big, dry goods box. With John pinned in the box, Pearson pounces on him and punches John several times more in the face. He also tries to kick him, all the while “swearing and talking vehemently,” Drew recalls.

John calls out, “Help! Help!” and Drew tries to pull Pearson off of John, while he too cries for help.

Pearson grabs John by the throat and attempts to pull him up. Drew hears a pistol shot, and Pearson reels backwards, staggering into the street. He has been shot, point blank, in the mouth. The bullet hits a bone and exits through his ear. Blood gushes everywhere from Pearson’s head.

John is also bleeding, from his nose, and has bloody wounds on his face. Fearing a lynch mob, he flees on foot, hiding his top hat in a coyote hole, and makes his way for the railroad and out of the country.

Worried that John Cozad would be extradited to Nebraska to stand trial, the family adopted new identities: John and his wife, Theresa, became Mr. and Mrs. Richard H. Lee. In public, they introduced their boys, John Anthony and Robert Henry, as foster brothers and adopted sons. The couple moved to Atlantic City, New Jersey, where John invested in the Boardwalk, buying property and opening a lavish gambling house known as Lee’s Fort.

John Anthony became Frank L. Southrn (not a typo, he dropped the e). In spite of his pyromaniac tendencies, he grew up to become a successful surgeon in Philadelphia, Pennsylvania, having graduated from the Jefferson Medical School. He was written up in medical books for devising a method of delivering a breech baby so the delivery didn’t break all the infant’s limbs.

Robert Henry Cozad became Robert Earle Henri. He later dropped the Earle. Despite the French spelling of his name, he insisted on an Americanized pronunciation, “Hen-rye.” In 1886, he enrolled at the Pennsylvania Academy of the Fine Arts in Philadelphia. He then studied at the Académie Julian and the École des Beaux-Arts in Paris, France, from 1888 to 1891. In 1892, he began teaching at the Philadelphia School of Design for Women, where he gained a reputation as a passionate teacher and where he acquired a following among emerging artists who included William Glackens and John Sloan, the core of the group that would later form the Eight. In 1900, he moved to New York City and taught artists Edward Hopper, Rockwell Kent and George Bellows, to name but a few. His seminal art book, The Art Spirit, published in 1923, influenced countless artists throughout America and Europe. He died of cancer on July 12, 1929, at the age of 64.

Recommended: Son of the Gamblin’ Man by Mari Sandoz, published by Bison Books. Although written as fiction, the book covers all of the main events with a clarity that rings true.