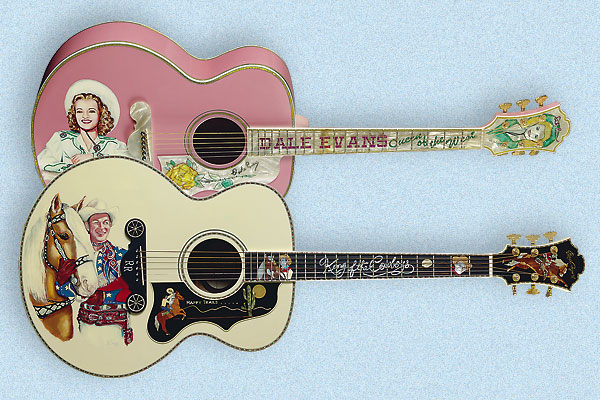 Leonard Franklin Slye likely never would have become the actor we know as Roy Rogers had he not first found fame in a cowboy band he formed with Tim Spencer and Bob Nolan in 1933.

They first called the band the Pioneer Trio. After Hugh Farr joined as a fiddler and his brother Karl followed as a singer, the group became a quintet known as the Sons of the Pioneers in 1935. His role in the band would help launch Slye as an actor to the point that he replaced the “Singing Cowboy” Gene Autry as the leading man at Republic Pictures in 1938 and became Roy Rogers. Pat Brady replaced him in the Sons of the Pioneers.

In its Country Music auction held on December 3, 2009, Christie’s New York led off its sale with Roy Rogers collectibles that largely related to his career with the Sons. These collectibles conjure up memories of the band’s popular songs, including “Tumbling Tumbleweeds,” the group’s first big hit in 1935 and a song that still resonates with people today. The Coen Brothers included it at the start of their 1998 comedy The Big Lebowski. And Jack Palance, who won an Oscar for his role as Curly in 1991’s City Slickers, used this song to bridge a dam that had evolved between his trail boss character and Billy Crystal’s character Mitch.

In the film, the two are sitting together around a campfire, during a cattle drive in New Mexico. Mitch’s two best friends have taken him on this trip for his birthday, hoping  it will help them all deal with their mid-life crises. As Curly sharpens his knife, Mitch begins to play his harmonica. Curly tells him to put it away—twice. Mitch pauses his playing and goes into a diatribe about how the relationship between the two of them has been precarious since they met, ending it with: “If you’re going to kill me, get on with it. If not, shut the hell up. I’m on vacation.”

Mitch resumes playing his harmonica. Curly gives him a long, hard stare and menacingly points his knife at the Easterner. Then Curly sits closer to a nervous Mitch and surprisingly begins reciting that famous Sons song to Mitch’s tune, “See them tumbling down, pledging their love to the ground, lonely but free I’ll be found, drifting along with the tumbling tumbleweeds.”

More than half a century after the formation of the Sons of the Pioneers, the songs they sung are still bringing many of us together. Even more, the group continues to churn out Country-Western music. Roy Rogers was the last of the original members to die, but the legacy of his group has continued through his successors. Celebrating its 75th anniversary last year, the Sons will be on tour in 2010 and will perform at a summer dinner theatre in Branson, Missouri.

The Rogers portion of Christie’s Country Music auction also included items linked to his wife Dale Evans; all the lots hammered in for a total of $136,600.

I like to imagine that those whose bids claimed a Rogers collectible still hear that Sons song deep in their hearts, on the range where each one belongs, “drifting along with the tumbling tumbleweeds.”